The canton of St. Gallen ( Swiss-German Sanggale , French Saint-Gall , Italian San Gallo , Romansh Sogn Gagl ? / I ) is a canton in German-speaking Switzerland and is located in the Eastern Switzerland region . The main town is the city of the same name, St. Gallen .

More important rivers are the Rhine , the Thur , the Linth , the Sitter and the Seez .

Geographical regions from north to south and from east to west. 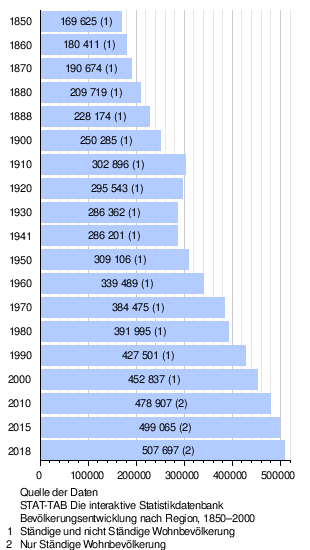 The inhabitants of the canton are called Sankt Gallen .

Due to the heterogeneous composition of the canton as a result of the mediation act of 1803, there are different dialects in the canton of St. Gallen, including the Rheintaler, St. Gallen , Toggenburg or Sarganserland dialect.

Romansh was spoken in the southern regions of the canton of St. Gallen into the Middle Ages . For this reason, many geographical names (towns, fields, mountains, water) in this area are of Romanesque origin. The Swiss German dialects there still have a Romance accent today (Sarganserland and Werdenberg).

Since the canton of St. Gallen was only created from different territories in 1803, it is denominationally very heterogeneous. The northern Fürstenland (once owned by the Prince Abbot of St. Gallen), with the exception of the traditionally reformed city of St. Gallen (once a free imperial city), and the southern parts of the canton (once subject areas of central Switzerland), including the Sarganserland, are purely Catholic . Toggenburg in the west is mixed, but predominantly Reformed, the Rhine valley in the east is also mixed, but predominantly Catholic (with the exception of the Reformed former Zurich and Glarus subject areas of Sax and Werdenberg ).

Total population of the canton of St. Gallen by religion / denomination (status: 2000 census)

As of December 31, 2017, 44.1 percent of the total population of the canton were Roman Catholic and 21.3 percent Protestant Reformed , while 34.6 percent belonged to another denomination / religion or were non-denominational . In the 2000 census, 52 percent of the canton's population were Roman Catholic, 26 percent Protestant Reformed, 10 percent belonged to other Christian churches, 6 percent were Muslim and 6 percent were non-denominational.

With the exception of the Roman Catholic and Reformed Churches, there have been no figures on the religious affiliation of the total population of the canton since the 2000 census . The Federal Statistical Office , however, carries out sample surveys in which other religious communities in the canton of St. Gallen are also recorded. In the 2017 sample survey, 7 percent of respondents aged 15 and over believed that they were of a different Christian denomination (neither Roman Catholic nor Reformed), 8 percent were Muslim and 1 percent belonged to another religious community. 18 percent of respondents aged 15 and over were non-denominational . Furthermore, the survey shows greater differences in terms of religious affiliation when the citizenship and origin of the respondents are considered: 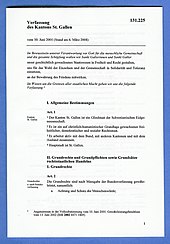 First page of the constitution of the canton of St. Gallen

The current cantonal constitution of the canton of St. Gallen is dated June 10, 2001 (with changes since then).

The legislative body ( legislature ) is the cantonal council , which has 120 members and is elected by the people for a fixed term of four years according to proportional representation.

The people who are entitled to vote also have a direct share in the legislation through referendums , i.e. mandatory referendums in the event of constitutional changes, optional referendums in the event of changes to the law, and popular initiatives for the adoption of constitutional or legal provisions. The vote on a law can require 4,000 voters; to propose a law requires the support of 6,000 voters; and to propose a constitutional amendment , 8,000 voters are required. Finally, 4,000 persons entitled to vote can demand general legislative activity ( unitary initiative ). The mandatory or optional referendum is then subject to government spending in the amount specified by law.

See also : List of cantonal referendums in the canton of St. Gallen

The composition of the Cantonal Council since the elections in the Canton of St. Gallen in 2016 is as follows: 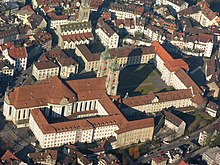 Seat of the legislative and executive branches: The Palatinate building in the monastery district on the right in the picture

The parliament meets in the so-called Palatine wing of the monastery courtyard in St. Gallen.

The highest executive or executive body ( executive ) is the government , which has seven members with equal rights. They are elected by the people for a fixed term of four years according to the majority vote. The cantonal council elects the chairman, district president (until 2002 Landammann ), on a rotation basis for a one-year term of office.

The government councils of the current legislature from June 1, 2012 to May 31, 2016 (since the elections in the canton of St. Gallen 2012 ) and their respective departments are as follows:

State Secretary Canisius Braun (since 2009) is head of the State Chancellery .

See also : List of Government Councilors of the Canton of St. Gallen

The law ( judicial ) is at the Cantonal level by the Cantonal , commercial , administrative and insurance court applied.

At the regional level, there are first-instance district and labor courts as well as mediators as upstream conciliation authorities .

The court of cassation , until then the highest cantonal court, was abolished on January 1, 2011.

→ Main article : Administrative structure of the Canton of St. Gallen

→ Main article : Municipalities of the Canton of St. Gallen

As decentralized units, the canton of St. Gallen normally knows the political communities . Special communities are the local communities , the school communities as well as local and local civil corporations , the number of which, however, is decreasing from year to year and which consequently no longer exist in the entire canton. Although corporations under public law, the Roman Catholic and Protestant Reformed parishes are not "parishes according to parish law", but are organized according to regional church law .

Until the end of December 2002, the canton of St. Gallen was divided into districts . The tasks of the former districts have been increasingly transferred to other bodies in recent years; as an institution, the districts were finally abolished with the new cantonal constitution. Today's constituencies no longer perform state administration tasks.

Since January 1, 2003, the canton of St. Gallen has been divided into the following constituencies, which are listed in clockwise order: 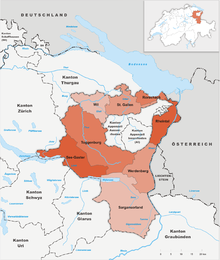 Constituencies of the Canton of St. Gallen

The canton of St. Gallen maintains selected regional partnerships in Eastern and Central Europe as well as in Northern Italy:

→ Main article : History of the Canton of St. Gallen

The "Old Order" in Eastern Switzerland until 1798

The canton of St. Gallen was created in 1803 by Napoleon Bonaparte at the request of the Helvetic MP Karl Müller-Friedberg . The area of ​​the canton emerged from the merger of the Helvetic cantons Linth and Säntis minus the restored cantons Glarus and Appenzell. This "bankruptcy estate" consisted of the following areas (in terms of size):

The newly formed canton of St. Gallen joined the Swiss Confederation as a federal member with equal rights in 1803, together with the other new cantons of Thurgau, Vaud , Aargau , Graubünden and Ticino . The briefly on the st. Gallic territory, the Helvetic cantons Linth and Säntis were dissolved.

The young canton adopted its first cantonal constitutions in 1803 and 1814 and was able to assert itself in the post-Napoleonic period against the territorial claims of the former prince abbot of St. Gallen, Pankraz Vorster , on the one hand and against separatist regions on the other.

In the constitution of 1814, due to the confessional heterogeneity of the canton, matters such as church, marriage and school matters were not handed over to the state, but to the Catholic and Reformed population groups, the so-called «cantonal parts», so that in addition to the general legislative Grand Council (today the Cantonal Council ) a Catholic and a reformed Grand Council were also introduced (→  confessional dualism ).

In 1831 a representative democratic constitution was introduced which, with the "people's veto ", already showed the first direct democratic features and replaced the previous oligarchic regime. In 1861, after violent disputes, the state took over the previously church school system. The strong denominationalization of the canton shaped St. Gallen well into the 20th century. In 1875 the “people's veto” was replaced by the optional referendum (the people's right to object to laws).

The right to vote and vote for women was introduced in St. Gallen in 1972 at the cantonal and communal level.

→ Main article : Flag and coat of arms of the Canton of St. Gallen

The revolutionaries in France adopted their symbols. In addition to the tricolor , the Helvetic Republic also adopted the bundle of rods. Compared to the French Marianne , Switzerland chose her Helvetia . After Napoleon Bonaparte founded the canton of St. Gallen, the bundle of rods was taken over and today shows the circumstances under which the canton was founded. The St. Gallen rod bundle has eight (five of which are visible) rods for the eight former districts of the canton at the time the canton was founded. 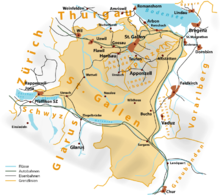 Agglomerations and railway lines in the canton of St. Gallen

Half of the total area in the canton is used as agricultural land. Until around 1920, the textile industry was by far the most important branch of industry in the St. Gallen economy .

The most important company in the canton is the building materials group LafargeHolcim , based in Rapperswil-Jona . In 2018, the group was 14th on the list of the largest companies in Switzerland . Other important companies are Bühler AG , Geberit , SFS , Debrunner Koenig Holding , Leica Geosystems and Maestrani .

As every year with road and rail traffic , numerous accidents with wildlife occurred again in 2018 . In the canton of St. Gallen, at least 421 red foxes , 326 deer , 186 badgers , 126 beech martens and various other species fell victim to traffic.

→ Main article : Public transport in the canton of St. Gallen

Several long-distance lines of the Swiss Federal Railways run through the canton. The most important hub in the canton is the St. Gallen train station , followed by the Wil , Rapperswil , Ziegelbrücke , Sargans or Heerbrugg train stations .

The national road network completed in the canton of St. Gallen ensures the connection to the rest of Switzerland; The only thing left is a better connection to neighboring Austria. The cantonal road network with a total length of approximately 675 kilometers covers cantonal and regional needs. Links within the communities or less significant links between communities are the responsibility of the political communities.

In 2019, the degree of motorization (passenger cars per 1000 inhabitants) was 557. The cantonal civil engineering office maintains a specialist unit for non- motorized traffic . However, the municipalities are primarily responsible for non-motorized traffic (pedestrian, hiking and cycle path networks).

Cities and towns in the canton of St. Gallen

Listed below are the most populous of the 77 political communities with more than 10,000 inhabitants as of December 31, 2018:

Other municipalities with known localities are:

Portal: St. Gallen  - The St. Gallen portal offers an overview of articles about the canton of St. Gallen.