This article deals with the referendum in Switzerland. For an explanation of similar instruments in Germany and Austria see referendum and referendum (Austria) .

The referendum ( French Votation populaire , Italian Votazione popolare , Romansh Votaziun dal pievel ) is an instrument of direct democracy in Switzerland and thus an important element of the political system of the Swiss Confederation . Those entitled to vote can vote on a proposal previously made through the popular initiative or on a political deal submitted on the basis of the obligatory or optional referendum .

There are referendums at all political levels in Switzerland. They are referred to as either communal (in the municipality ), cantonal (in the canton ) or federal referendum (federal level). In the Swiss two-stage people's legislation , it is the second and final step in the process.

There is generally no quorum for evaluating the voting result . This means that the simple majority of the votes cast always decides whether a proposal is accepted or rejected. Invalid votes will not be considered.

At federal level, both the overall result and the respective results in the cantons are taken into account in votes on popular initiatives or in the case of mandatory referendums in accordance with Art. 140, Paragraph 1. In such voting a template both the majority of voters (need for adopting popular majority ) and the majority of the cantons ( cantons ) agree. The term technicus for this reads «People and cantons are put to a vote: ...». 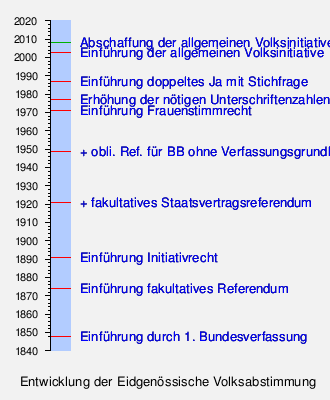 The involvement of the people has a continuous tradition in Switzerland. The referendum can be seen as a further development of the Landsgemeinde , which has been documented in writing since around 1275. Referendums were also held after the Middle Ages, for example in Zurich in 1521, when Zwingli asked the people whether the pay alliance with France should be renewed. The survey gave a negative result, and accordingly the government did not renew the contract.

On the other hand, the ideas of the Geneva philosopher Jean-Jacques Rousseau and models from the French Revolution, such as the Montagnard Constitution of June 24, 1793, had a decisive influence on the development in the 19th century and thus on the current form .

To this day, the people's rights, and thus also the means of referendums, have been developed further, be it with regard to the content of the draft such as the extension to state treaties in 1921, be it with regard to voting rights such as the introduction of women's suffrage in 1971 or the procedure such as the introduction of the « double Yes with key question »1987, which enables those entitled to vote to approve both a popular initiative and the parliamentary counter-proposal .

As a rule, innovations are first introduced by one or more cantons before they are also applied at federal level. People's rights that do not prove themselves will be abolished again. The “ general popular initiative ” inserted into the Federal Constitution in 2003 was canceled again in a referendum in 2009 because its implementation had not proven to be feasible. The same thing happened with the “constructive referendum” introduced in the new constitution of the Canton of Zurich in 2006, in which a draft bill is compared with a formulated counter-proposal, which was abolished in 2013 due to unsatisfactory practical experience.

All Swiss nationals who have reached the age of 18 are entitled to vote at federal level, regardless of whether they live in Switzerland or abroad. This does not apply to persons who are incapacitated due to "mental illness or mental weakness".

Since the term “ municipality ” in Switzerland does not necessarily apply to a political municipality (geographical area), but also to school, church or civic communities, voting rights are not based solely on their place of residence, but on other characteristics such as place of origin or affiliation determined by a regional church . 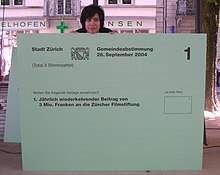 Example of an enlarged voting slip from 2004 for the voting campaign for the Zurich Film Foundation . With politician Min Li Marti .

A referendum can be held in Switzerland at the federal level in three possible ways:

In the cantons and communes , popular rights are more extensive and referendums are usually more frequent. This is based on the provisions in the respective cantonal constitution and the municipal ordinances .

The procedure is based on the “Federal Act on Political Rights” or the corresponding ordinance of the cantonal provisions. The cantons are responsible for implementation. At the federal level, four dates are set in advance on which votes and elections are held. Cantonal and communal votes are usually carried out at the same time, although the cantons and communes are free to set additional dates. The Federal Council determines at least four months in advance whether a federal ballot should take place on that day and which proposals will be voted on.

Those entitled to vote will receive the voting documents no earlier than four and no later than three weeks before the date, which usually consists of the ballot papers, the voting card, the voting envelope and the voting explanations (colloquial voting booklet ). In this is the wording of the proposal to be voted on, the arguments of the supporters and opponents, as well as the opinion of the respective executive (i.e.: municipal council , cantonal government or Federal Council ) and the results of the corresponding deliberations and votes in the respective legislature (i.e.: large municipal council , Cantonal Council , National Council and Council of States ).

Voters can put their ballot papers in the ballot box in person in the voting room, which is open on the Sunday of voting until 12 noon and on at least two of the last four days before the day of the voting, or by letter, although there are cantons where the corresponding return envelope is already prepaid, send to the respective municipality. In certain cantons you can also vote via the Internet or by SMS. The I-voting project was started in the canton of Geneva in 2003, and in the summer of 2006 the Federal Council decided that I-voting should be continued and extended to all of Switzerland. Representing the vote, e.g. for disabled people, is permitted under certain conditions.

The counting of the votes is the responsibility of the respective voting and electoral offices, which are organized at the municipality or constituency level and consist of persons entitled to vote from the respective area.

A special form of the referendum are the rural communities in the cantons of Appenzell Inner Rhodes and Glarus, the few still held regional rural communities and the usual in smaller communities without parliamentary community meetings at which at a convened meeting of each voters directly and openly about certain items of business and Naturalization is voted.

Importance of the referendum

Due to Switzerland's political system, which is based on concordance , and the independence of executives at all levels from parliamentary majorities, the referendum serves as a substitute for a parliamentary opposition and enables the electorate to continuously exert direct influence on current politics.

The financial referendum, which is widespread at the cantonal and communal level, also promotes the sensible planning of expenditure for public projects and, together with the respective coordination on tax rates, the acceptance of the respective financial policy and the actions of the political authorities in general.

The large number of transactions that have to be submitted to the vote means that in absolute numbers around half of all referendums held worldwide take place in Switzerland.

* operated by the Federal Chancellery

Cantonal referendums in the Swiss Confederation