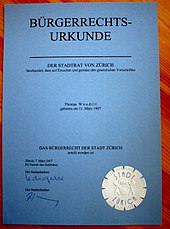 Civil rights certificate of the city of Zurich

The place of citizenship (also hometown or place of home authorization ) refers to the municipality in Switzerland (or in the canton of Appenzell Innerrhoden the part of the country ) in which a citizen of Switzerland has his or her home law . The place of origin can, but does not have to, match the place of birth or place of residence. Nowadays, the home permit is of less practical importance in a place of citizenship than in earlier times, but is entered in the Swiss passport and on the Swiss identity card, while in other countries the place of birth is noted in the appropriate place instead of the place of origin.

Acquiring Swiss citizenship , which is made up of three civil rights (municipality, canton and federal government), is therefore simultaneously acquiring the citizenship of a specific municipality.

In the Old Confederation , but also in numerous other earlier rulers , the place of citizenship was the place where the ancestors lived and acquired rights and obligations and were therefore entitled to reside. The citizen place was the place in which a citizen had rights to the common goods; this included, for example, common willow and wood justice , i.e. pecuniary benefits . At the township he also had to make his military strength available to the sovereign . Anyone who came there usually had to buy into a company like a new partner .

It was also the community that had to pay for its citizens if they became impoverished and could no longer make a living themselves. Therefore, in the 19th century, a number of Swiss communities in financial difficulties tried to get rid of their poor by paying them the crossing to America and in return letting them renounce their citizenship .

By acquiring Swiss citizenship, be it by law - for example through birth or adoption  - or through naturalization , the citizenship of the community in which one lives is assumed at the same time. This community is the place of citizenship . Formally, it is the municipality that grants citizenship. The citizenship of the canton and the Swiss Confederation is linked to this grant. The formerly very large scope of the municipality has been increasingly restricted in recent times by requirements of the canton and the federal government, which are supposed to preserve legal equality. 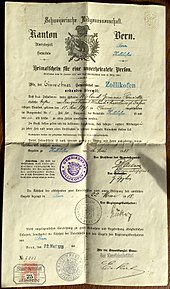 Certificate of origin of the municipality of Zollikofen in the canton of Bern , 1918

Most Swiss never lived in the Bürgerort. However, the place of citizenship must be given in a number of forms. For a long time, the family register was kept at the town , which provided information about birth, marriage, death and civil rights. In 2004 this was replaced by the person register , which is managed by the Infostar system throughout Switzerland . The Citizenship represents the certificate of origin of which is to be deposited with the municipality of residence for the duration of the stay.

The place of origin is listed on the identity card and in the passport. During the drafting of the Identity Card Act , it was checked whether these documents should be replaced by the place of birth. However, the idea was dropped again.

With regard to the local jurisdiction of courts, the place of citizenship is irrelevant. The Swiss Code of Civil Procedure , for example, stipulates that the court at their place of residence is generally responsible for actions against a natural person.

There is basically no longer any obligation for the hometown to provide social assistance to its citizens . According to the regulation of the Jurisdiction Act, this task is performed by the place of residence - regardless of civil rights. As a result, the ability of the home parish to object to the establishment of a father-child relationship in certain cases has lost its importance. The place of origin or the canton in which the place of citizenship is located was responsible for the costs of social assistance until 2012 if a citizen became needy in the first two years of his arrival in a new municipality or if he was without a permanent residence. However, the Council of States Commission for Social Security and Health recommended that the Federal Assembly remove these hometown obligations from the law. In 2012 the National Council decided with 151 to 9 votes to dissolve this last meaning of the hometown. As a result, the place of residence can no longer claim reimbursement from the place of origin / place of origin in the event of social assistance. The decree from 1681, which regulated at the time that the home town had to pay for social welfare benefits, was thus repealed after 331 years.