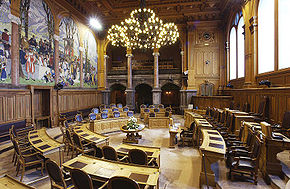 The Council of States ( French Conseil des États , Italian Consiglio degli Stati , Romansh Cussegl dals Stadis or Cussegl dals Chantuns ) is the small chamber of the parliament of the Swiss Confederation . The name comes from stand , the old name for the Swiss cantons , it has nothing to do with the corporate state .

Since there are more veteran politicians in the Council of States than in the other parliamentary chamber, the National Council , it is also called in colloquial language with the originally Bern German word Stöckli ( moving house ).

The verbatim minutes of the Council of States are published in the Official Bulletin of the Federal Assembly and on a website on the same day (see web links) .

The Chamber of States during a meeting

Standard German and French are used in the debates , Italian is rarely used. There is no simultaneous translation , which means that all MPs speak in their mother tongue and that every member of the Council of States should at least understand German and French.

Over time, however, the electoral process has become standardized. All cantons have determined direct election by the canton people as the electoral mode and set the term of office to four years. With the exception of the cantons of Jura and Neuchâtel , which elect their councilors according to proportional representation , the councils of states are now elected by the people in all cantons with major elections. The Council of States of the Canton of Appenzell Innerrhoden is elected by the Landsgemeinde ; In the Canton of Neuchâtel , foreigners can also take part in the elections for the Council of States. In the canton of Glarus , 16 and 17-year-olds have recently been able to exercise the right to vote at the communal and cantonal level (and thus in elections to the Council of States) since a regional municipality resolution.

In all cantons with the exception of Appenzell Innerrhoden, the election of the Council of States takes place on the same day as the National Council election. In Appenzell Innerrhoden, the traditional rural community will be elected in April before the National Council elections. However, in all cantons that elect the Council of States by majority vote, a second ballot is necessary if at least as many candidates have not achieved an absolute majority in the first ballot as there are seats to be allocated.

In the cantons of Graubünden and Zug , too , the election of the Council of States took place a year before the National Council election. With a constitutional amendment in 2007, the Graubünden and Zug residents have now adopted the practice of the majority of all cantons and elect their councilors in parallel to the national council election. However, while Graubünden made the change to the 2007 election, in Zug it did not come into force until the next general renewal elections in 2011.

As representatives of the cantons, the councils of states were initially determined by the respective cantonal parliaments . From 1867 onwards, various cantons began to elect their councilors through the people. The introduction of popular elections was a process that lasted over a hundred years: the canton of Bern was the last to introduce this procedure in 1977, while the canton of Jura, founded in 1979, went straight to it. The following table shows the year of introduction.

Due to the electoral procedure, the composition of the Council of States differs according to parties from that of the National Council  - for decades the Liberals and the Christian Democrats have been the two strongest parties, while the SVP (like the SP in the past) is significantly weaker than in the large chamber.

The 46 seats are distributed as follows (at the beginning of each legislative period):

Work of the Council of States

The work and competencies of the Council of States are regulated by the Federal Act on the Federal Assembly (Parliament Act) and the fifth title of the Federal Constitution of the Swiss Confederation . The Council of States forms the Federal Assembly with the National Council and exercises supreme power in Switzerland, subject to the rights of the people and the cantons . Both chambers are called councils. The Council of States and the National Council do not meet constantly, but meet regularly for sessions. As a rule, there are four sessions of three weeks each, with two to five meeting days per week. The spring session begins on the first Monday in March, the summer session on the first Monday in June, the autumn session after the Federal Prayer Day and the winter session on the last Monday in November. During the sessions the legislative proposals are debated; if the sessions are insufficient, a council can convene a special session for itself. In the case of special events (political crises, war, etc.), a quarter of the members of a council or the Federal Council can request that an extraordinary session be called; then both councils meet at the same time. So far, the Council of States and National Council has met eight times for extraordinary sessions, see the list of extraordinary sessions .

Room of the President of the Council of States

The meetings of States derives elected to one year Senate President . The Council of States vote without instructions from their cantons or cantonal governments - this is, for example, in contrast to the German Federal Council  - and are therefore completely free to exercise their mandate. Accordingly, the traditional phrase “representation of the cantons” is misleading.

The two chambers of the Council of States and the National Council are politically completely equivalent - a resolution is only valid if it has been passed by both chambers in the same version. All matters are dealt with in turn by both councils. The council chairpersons jointly determine which council deals with a business first («first council»).

If the National Council and the Council of States cannot agree on a common text after the first discussion, a difference adjustment procedure takes place, whereby the business between the two councils commutes back and forth. After three unsuccessful rounds, the agreement conference is called. If the unification conference's proposal is rejected by one of the parliamentary chambers, the deal will fail. Further explanations on the procedure: see legislative procedure (Switzerland) .

The Council of States and the National Council together form the United Federal Assembly , which meets for elections and on some other special occasions.

The taxable income of a Council of States from its function as Council of States averages 74,000 Swiss Francs (of which annual income 21,000 Francs, 106 daily allowances including sessions of 400 Francs = 42,400 Francs). The reimbursement of expenses amounts to an additional 58,600 francs (including annual allowance of 30,000, 99 meal allowances of 100 francs, 56 accommodation allowances of 169 francs). Total income and expenses: 132,800 francs. Depending on the number of meeting days and the place of residence, expenses and daily allowances may vary.

→ Main article : List of the members of the Swiss Council of States in the 51st legislative period

The role of the Council of States as cantonal representation emerged in the preparatory work for the first Federal Constitution of 1848. The conservative party to the conflict in the Sonderbund War was keen to preserve a certain state sovereignty for the cantons. As a compromise, the victorious liberals approved the opposing party as a substitute for the daily statute, which with its parity of votes for all cantons gave the previously small Sonderbund cantons a disproportionate weight of votes and thus created a balance with the National Council in the newly created federal state . The system was not invented, however, but clearly imitated the two-chamber system of the US constitution . In contrast to the daily statute that has been handed down since the Middle Ages, the members of the Council of States do not vote according to instructions from the cantons, but according to their own political discretion and political-economic interests or party affiliation.

Criticism of the voting process

The Council of States came under fire in December 2012 in the context of a three-time false count of a vote to ban reptile skins. Video recordings by Politnetz revealed three wrong votes in a deal on a reptile import ban; the vote had to be repeated twice so far. However, the opponents of electronic voting saw no problem in such counting errors. Two Councils of States, Hannes Germann (SVP, Schaffhausen) and Paul Niederberger (CVP, Nidwalden), even threatened with consequences at the time because the video recordings in the Council of States were not lawful. There had already been an incorrect count in the spring of the same year; a vote had to be repeated after more votes were counted than there were councils in the room.

The majority of the Council of States finally gave in on December 10, 2012 and supported a parliamentary initiative by This Jenny (SVP, GL) to introduce an electronic system.

Since the 2014 spring session, the Council of States has also been voting using an electronic voting system. In contrast to the National Council, however, the results are only published in the case of overall and final votes, votes with a qualified majority, and if at least ten council members request it. Electronic voting was introduced in the National Council in 1994.

Detailed results of the Swiss Council of States elections