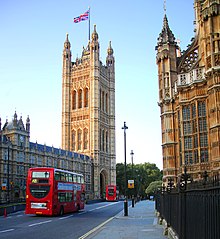 The building of Parliament in London

As sovereign, the respective monarch formally forms a third part of parliament. Queen Elizabeth II has played this role since 1952 . Bills are introduced by the Prime Minister- led government in the House of Commons, which votes on them after appropriate debate. Subsequently, these bills have to be approved by the House of Lords before they are put into effect by the Queen. The last step has a purely ceremonial character.

On March 22, 2017, a terrorist attack occurred in the area of ​​Parliament and nearby Westminster Bridge, in which five people were killed and forty people were injured.

Term of office of parliament

Parliament's term of office was set at three years in 1694. It was extended to seven years in the Septennial Act of 1716 and reduced to five in the Parliament Act of 1911. During the Second World War , the term of office was provisionally extended to ten years, but has remained at a maximum of five years since the end of the war. The Fixed-term Parliaments Act 2011 requires general elections to take place on the first Thursday in May, the fifth year after the previous general election.

The most important privilege for all members of both Houses is freedom of speech during debates ; Statements in the upper house ( House of Lords ) and in the lower house ( House of Commons ) can be brought to trial under any circumstances. Another privilege is the impossibility of arrest , except in cases of high treason, capital crimes (felony) and breach of the peace . This privilege is valid during the session of Parliament and 40 days before and after. The parliamentarians , on the other hand, are no longer exempt from serving as jurors in a jury .

In English parliamentarism, the monarch's ban on peace was also transferred to parliament. Unlike in Germany, this has resulted in an asylum function in the parliament building for criminals, defaulting debtors or individuals who are otherwise threatened by government coercive measures.

Commons : Parliament of the United Kingdom  - collection of pictures, videos and audio files

Legislature of the United Kingdom , the British Overseas Territories and the Crown possessions of the British Crown

Parliaments of the Crown possessions of the British Crown :
Guernsey : States of Guernsey  | Isle of Man : Tynwald ( House of Keys , Council on Legislation ) | Jersey : States of Jersey