The title of this article is ambiguous. Further meanings are listed under Guernsey (disambiguation) .

Location in the English Channel

Aerial view of Guernsey, view from the northeast

Guernsey [ ˈɡɜːnzi , English ] ( listen ? / I ) or Guernesey [ ɡɛʁ.nə.zɛ , French ] is the second largest of the British Channel Islands . The Channel Islands are neither part of the United Kingdom nor a crown colony , but as crown possession (English crown dependency) directly under the British crown. They are separate legal entities.

The island is a hilly country with cliffs, especially in the south. The agricultural use consists mainly of livestock and horticulture. Guernsey is a major tourist destination for nature and bird lovers.

The island has a mild, almost Mediterranean climate due to the influence of the Gulf Stream and due to its protected location in the Gulf of Saint-Malo . Temperatures below 0 ° C are extremely rare, on the other hand, the sea water hardly ever reaches temperatures above 20 ° C even in midsummer.

Since there is only very rarely frost, cypresses , banana and palm trees thrive on the island alongside fuchsias and Guernsey lilies (the island's national flower) .

Guernsey was created by the eustatic rise in sea ​​levels after the last ice age around 4000 BC. Separated from the French mainland. Settlement has been proven since the Mesolithic (Lihou). So far there are no Paleolithic finds like those on Jersey . The island does not have its own flint deposits , but north of Alderney apparently alluvial pebbles from submarine deposits were used. The oldest Neolithic site to date is Les Fouaillages in the north of the island, excavated in the 1970s by Ian Kinnes from the British Museum . The island has numerous passage and gallery graves from the Neolithic period and some anthropomorphic menhirs . The most important of these stands today in the cemetery of the Church of Castel. Numerous finds of the bell beaker culture are also known.

The ancient name of the island was Sarmia (or sarma, armia, sarnia) . Despite the difficult navigation conditions caused by a tidal range of almost twelve meters, the port of St. Peter Port was an important trading center as early as Roman times, as evidenced by a wreck from the 2nd century in the port entrance.

The islands were Christianized by Saint Samson of Dol (cf. Dol-de-Bretagne ) and were originally part of the Duchy of Brittany , but then fell to the Duke of Normandy . In 1066 the Duke of Normandy William the Conqueror conquered England and became King of England. The Channel Islands remained in royal possession due to the personal union, but never became part of the United Kingdom.

Numerous witch trials took place on the island in the 17th century . In 1617 Collette du Mond confessed - under whatever circumstances - to having participated in a witches' Sabbath at the Chateau de Rocquaine. In the early 18th century, numerous coastal fortifications were built against the threat of a French attack ( Martello towers ). In addition, Sir John Doyle , Lieutenant Governor of Guernsey, had the canal filled in that separated the former tidal island of Le Clos du Valle from Guernsey. Fort Gray, which is now a shipwreck museum, goes back to him. 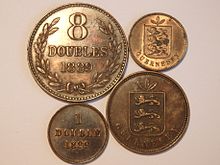 In 1815 there was an experiment of interest in monetary policy on the island of Guernsey. The consequences of the Napoleonic Wars made themselves felt all over Europe, also on this island. The islanders produced food far beyond their own needs, but the taxes and interest payments collected on London banks finally brought payment transactions to a standstill. The governor of Guernsey at the time, Daniel de Lisle Brock, proposed the construction of an indoor market for £ 4,000  which would give the economy a new boost. These 4,000 pounds were simply to be printed by yourself and put into circulation as a kind of second currency. After five years the hall had fully amortized, that is, it had fully earned its depreciation and the 4000 pounds, which had been in circulation all over the island and had generated sales of all kinds, were again available to the market hall investor in full cash Disposal, were no longer needed and burned. According to this principle, several building projects were implemented one after the other with self-printed and later destroyed money. However, by 1835, the economy came to a standstill again due to the intervention of foreign banks and a reduced amount of money . Some supporters of the free economy , including Hermann Benjes , consider the “Miracle of Guernsey” to be the forerunner of circulation-guaranteed money according to Silvio Gesell , who wrote an article about the experiment. 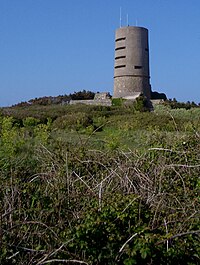 The French poet Victor Hugo was imprisoned in France in 1851 and had to go into exile . He first settled on the Channel Island of Jersey and then on Guernsey, where he lived until 1871 in St. Peter Port in the Hauteville House , which now serves as a museum and can be visited. In September 1883, the French painter Auguste Renoir visited the island and a number of paintings were created, including Moulin Huet Bay .

In the Second World War , after the conquest of France, there was fear of a German attack. That is why the Germans and Austrians residing in Guernsey were interned . On May 20, 1940, the British ship SS Biarritz left the island with 1000  soldiers , the lieutenant governor and his family as well as French soldiers and British administrative staff, which was thus completely demilitarized. Numerous children were evacuated to England. On June 30, 1940, five Junkers troop transports landed and the island was occupied by the German Wehrmacht . The British nationals who were not born in Guernsey were interned in the Lindele camp in Biberach an der Riss (the town is now officially partnered with). Guernsey was fortified by the German occupying forces and was intended to serve as a starting point for attacks against England. The island commander was Eugen Fürst zu Oettingen-Wallerstein from 1940 to 1942 , who was then recalled for political reasons. 1942-1945 the German Guernsey newspaper was published. On Alderney , the concentration camp Aurigny (" Lager Sylt ") was built as a branch of Neuengamme , in which mainly Eastern European forced laborers were held. During the occupation, left-hand traffic was switched to right-hand traffic. Liberation Day on May 9, 1945 is celebrated with a solemn ceremony every year. There is also an occupation museum in Les Houards, Parish Forest.

In Great Britain there are two areas that officially have the status of a bailiwick ( English Bailiwick, French Bailliage ), Guernsey and Jersey . However, they are not headed by a Vogt , but as crown property they are directly subordinate to the British Crown.

Politically, the islands of Alderney , Sark , Herm , Brecqhou , Jethou , Burhou , Lihou , the Casquets , Les Hanois and other even smaller islets also belong to the Bailiwick of Guernsey . The Bailiwick issues its own banknotes and mints its own coins .

The Bailiwick of Guernsey is in twelve municipalities ( parishes ) subdivided, of which Alderney and Sark have a special status and as dependencies are called. The parishes (without the dependencies ) used to be further subdivided into Vingtaines .

About 32 percent of Guernsey's gross national product is generated by financial service providers ( banks , insurance companies , investment companies ). In a ranking of the world's most important financial centers, Guernsey was ranked 53rd (as of 2018). Traditional sources of income such as tourism , mechanical engineering and horticulture (mainly tomatoes and cut flowers , especially freesias ) are on the decline. Low taxes have made Guernsey popular as a tax haven for private equity funds . As a member of a customs union with the EU , numerous EU regulations are also applied here. Like other offshore financial centers, Guernsey is coming under increasing pressure to adapt its laws to the conditions of international politics, particularly with regard to the transparency of capital inflows. Tax law is currently being reformed to comply with EU and OECD regulations. Since January 1, 2008, a new corporate tax law with a zero-ten rule has been in effect, according to which most corporations pay no corporation tax, but the provision of certain banking services is taxed at 10 percent. As a result, there is an expected shortfall of approximately £ 45 million which is expected to be offset by increased economic growth and indirect taxes. On January 28, 2016, the European Commission presented a package of measures to combat tax evasion , including Guernsey on the “black list” of tax havens.

CT Plus Guernsey Limited operates 20 bus routes (as of spring 2019) that serve large parts of the island. The island is internationally connected via Guernsey Airport and several ports. Guernsey can be reached by ferry from the Channel Island of Jersey , from the French ports of St. Malo and Dielette, and from the English ports of Portsmouth and Poole . The ferry connection to Weymouth has since been discontinued.