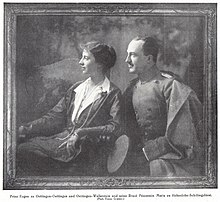 After studying law, Eugen zu Oettingen-Wallerstein joined the diplomatic service of the German Empire in 1909 . After legal clerkship and years as an attaché in Petersburg and Paris , he took part in the First World War as a lieutenant with the Uhlans . He was a member of the Bavarian Homeland and Royal Association .

On 3 August 1916 Oettingen-Wallerstein married in Schillingsfürst Maria Anna Princess of Hohenlohe , who bore him four children 1917-1924.

From 1923 to 1930 he was part-time head of the house and farm administration of the former Crown Prince Rupprecht of Bavaria and chairman of the board of directors of the Wittelsbach Compensation Fund . His older brother, Karl Fürst zu Oettingen-Wallerstein, died on May 24, 1930. Eugen became the new head of the Oettingen-Wallerstein family, took over the Wallerstein family estate and has called himself Prince since then . From 1930 to 1933 he was chairman of the Association of Larger Landowners in Bavaria and the Association of Bavarian Forest Owners . In February 1933, in the course of attempts to restore the Bavarian monarchy in order to prevent the National Socialists from taking power , he was sent by Rupprecht to Reich President von Hindenburg , who gave him a cool blow. During the Second World War , Oettingen-Wallerstein worked in the military administration in France until he was recalled for political reasons (1942) and was island commander of Guernsey from 1940 to 1942 . It seems plausible that the Rittmeister (captain) had long been an undesirable person for the Nazis - also because of his role in February 1933. Assigned to the Eastern Front , he had an accident in Dnepropetrovsk and was released from military service at the end of 1942.

Oettingen-Wallerstein was a founding member of the Bavarian Party . In 1950 he was elected its deputy chairman in order to bind the monarchist wing, which was in competition with the Bavarian Home and King Party, and also the large landowners more closely to the party.

On January 8, 1951, Oettingen-Wallerstein succeeded Joseph Baumgartner in the German Bundestag as a member of the Bavarian Party . From December 14, 1951 he was a member of the parliamentary group of the Federal Union , an alliance formed from the Bavarian party and center . On September 1, 1952, he resigned his mandate for health reasons. From January 17, 1951 until he left the Bundestag, he was deputy chairman of the Bundestag committee for burden sharing .

In 1959 he was awarded the Bavarian Order of Merit . The Eugen Fürst zu Oettingen-Wallerstein-Memorial -Galopprennen in Munich is named after him.