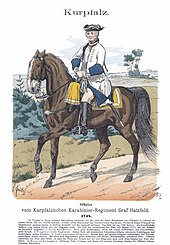 Rittmeister is a historical rank designation for officers of the cavalry and other mounted units in Germany and Austria . The rank corresponded to that of the captain in the foot troops. The Captain subordinate as deputy staff captain called in the mounted units according to staff captain . The rank of Rittmeister was also common in Germany for mounted departments of the field artillery . Cavalry officers who were transferred to other branches of service when changing careers, such as the air force , could also be promoted to Rittmeister for upcoming promotions .

After the abolition of foot artillery in World War I , the rank was generally used in the German artillery . Traditionally, the motorized reconnaissance departments of the army of the Wehrmacht , which were formed from cavalry troops, continued to use the name.

In Germany the rank of Rittmeister expired with the end of the Wehrmacht in 1945. In Austria it was not abolished by the police and gendarmerie until 1978. The name still exists today with the cavalry of Norway (rittmester) as well as with the cavalry and the armored troops of the Netherlands ( ritmeester ), which are in their tradition . In Poland the corresponding rank designation (rotmistrz) was abolished in 1947, in Denmark (ritmester) in 1951, in Sweden (ryttmästare) in 1972.

In the Polish army, a Rotmistrz (occupied since the 15th century) originally commanded a so-called Rota ( Rotte , see Rottmeister ). The officer grade Rotmistrz then served as the commander of an infantry or cavalry company, sometimes an entire regiment or even larger units. The name was later reserved for the captains of mounted units. As with the Wehrmacht, this rank remained in the Polish cavalry until 1945 as an equivalent to the captain of the foot troops.

Also in the Russian ranking table temporarily existed the military officer grade of "ротмистр" (rotmistr) . The Lithuanian variant of the rank was rotmistras . In the Czech (Oslovak) army, on the other hand, the rank rotmistr only denotes a non-commissioned officer (translated as Rottmeister ), which corresponds to that of a sergeant or sergeant.

With the mounted Swedish Life Guard (Livgardet) the commanders of the cavalry corps (regardless of their rank) are called ryttmästare , which in this case is to be understood as a designation of honor or service and not as a military rank .