Horse racing (horse racing) is an equestrian sport in which the horses have to cover a certain distance as quickly as possible. Horse racing is one of the oldest (organized) sports known to man. They serve primarily for breeding selection ( horse breeding ). Both the English thoroughbred and the trotters owe their breeding to the requirements of the racetrack. The tough selection process there leads to performance characteristics that are also most welcome in the breeding of other horse breeds (e.g. health, resilience, nobility in appearance and movement).

Horse racing has also been a recreational activity for people for centuries. Maintaining a racehorse in training is expensive and risky. That is why there are owner associations - a kind of association for the maintenance of one or more racehorses. Anyone can take part in horse races as spectators or bettors, these take place in stadiums with a covered grandstand. Trotting tracks have lengths of around 1000 m, horse racing tracks 1800 to 2900 m. The inner surfaces of the racetracks, which are 4 to 13 hectares in size, are often used for cross or swing golf games.

Horse races are held on different courses . As a synonym for horse racing, many competitions are called derby . Horse races , formerly called racing meadows , are now also known as turf . 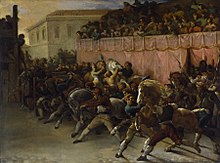 Equestrian competitions, Hippic Agones , were held at various athletic games in ancient Greece . At the funeral games in honor of his friend Patroclus, who died in battle, Achilles organized a great horse race (Iliad, Canto XXIII). In the ancient Olympic Games, 680 BC. The first chariot race with four-horse teams was held over about 13 km. In the course of time, other chariot racing disciplines were added over shorter distances, with two teams and racing.

After the partial collapse of the Eastern Roman Empire in the 7th century, chariot races were held almost exclusively in the capital Constantinople (Byzantium, now Istanbul ). From this time on, the influence of the circus parties was limited to Constantinople. From late antiquity to the 9th century, a significant part of the urban population of Byzantium was organized in them. They gained political influence as they were able to mobilize the people by participating in the games, theater and chariot races in the Hippodrome of Constantinople.

In Norse mythology horse races are described, such as the battle between Odin and the giant Hrungnir . They argue which of the two has the faster horse. Odin wins the competition on Sleipnir , but Hrungnir's horse Gullfaxi is so fast that it storms to Asgard, where Hrungnir, invited by the gods, takes part in a feast.

The Arabs also competed over long distances with their horses. Arabian horses are characterized today by particularly good stamina and are in Distanzsport very successful.

In the Middle Ages horse races are mentioned under Heinrich II (1154–1170). There are references to horse betting in 1522. The term jockey for racing riders is in use from around 1660.

The Palio di Siena has been held since 1633. In modern times, from the mid-fifteenth century to 1882, the carnival in Rome ended with horse races. Fifteen to twenty riderless horses ran along the long straight Via del Corso .

In the 18th century, horse racing became increasingly popular among European aristocrats. The oldest horse race in England is the St. Leger Stakes , which has been held since 1776. With the development of horse racing, the English thoroughbred breed arose.

All gaits are allowed in horse races . Since the gallop is the fastest way of moving the horse, these races are always done at a gallop. Horse races are mainly contested by English thoroughbred horses, but they are also advertised for Arabian thoroughbreds , half-bloods and sometimes ponies . The horses are ridden either by jockeys (professional riders) or amateurs.

Only the trot gait is allowed. Horses that gallop (technically: "jump", "jump") will be disqualified. 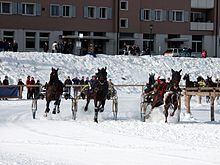 Skikjöring is a horse race in which a skier is pulled by a riderless horse. The horse wears a light breastplate harness and is connected to the safety belt by two tension cords, which the driver wears around the body. The leash must be guided on the horse by means of a waist belt with leash guide rings (e.g. lunging belt, entry belt, selette from single harness or comb lid from two-horse harness). So the driver has his hands free for the lines and can disconnect the train connection to the horse in an emergency. The Skikjöring races, which are held every year as part of the St. Moritz meetings in Switzerland, are very well known . All gaits are allowed. Skiers are pulled over a slope made of snow and ice by unridden thoroughbreds at speeds of up to 50 or 55 km / h. The drivers protect themselves with special equipment, similar to that of ice hockey players, against the chunks of snow and ice thrown up by the horse's hooves. Skijoring slalom is also practiced in France.

In skijoring, on the other hand, riders sit on the horses that the skiers pull. The skiers hold on to a bracket, similar to water skiing. A skijoring race has been held in Arosa every year since 1911. Skijoring and horse-drawn sleigh races are also popular sports. There are also snowboarders who let themselves be pulled by horses and children who let themselves be pulled along by a quiet horse (for example ridden by their mother) on ordinary wooden sleds.

The sport of off-road kjöring has existed since 1997 , in which inline skaters are pulled by jumping horses with special off- road roller blades . A course is overcome with jumps.

Only the tölt gait is allowed, a four- beat gait in eight phases. In a tölt race, only those horses that have shown a clear tölt are counted, the others are disqualified. Töltrennen are mostly run by Icelandic horses , a pony breed that , in addition to this special gait, is also born with the passport.

Only the pace racing pass is allowed, in which the horse's legs are not set diagonally like at a trot, but touch the ground in a line. (E.g .: the right rear and front legs are moved simultaneously, the left rear and front legs remain on the ground) In the USA and Canada, more pass races are held than trotting races and they are currently also at higher speeds.

The barrel race is a western discipline in which the aim is to circle three oil barrels as quickly as possible. Quarter horses are mostly used in the barrel race , and thanks to their powerful hindquarters and agility, they are particularly suitable for this.

A large part of the event costs and prices in horse racing is borne by the passion of the visitors to betting at the venue itself and the weather at the bookmakers . There is a lot of betting, especially in horse races and harness races.

Since the year 2000, the totalizator operators (non-profit racing clubs, with the national legal obligation to organize performance tests) have had to record a drop in betting turnover of around 60%, although betting turnover on horse bets in Germany has increased in absolute numbers. The reason for this radical redirection of betting sales is that the bookmakers usually only broker to tax-favorable foreign countries, thereby avoiding the payment of racing betting and lottery taxes to the tax authorities and depriving the racing clubs of the livelihood that results from a deduction from the betting money and the Financed the reimbursement of the state racing tax. In 2012, 15 million euros were spent on horse betting in Germany.

Results board with odds display after the race

There are four different basic types of bets, the odds of which are then determined on the totalizer . In most horse races you bet on

Other horse betting types that can be played in Germany are:

The betting formats for horse races from the USA and the Magna Racino in Austria are:

These three betting formats can also be combined e.g. B. WINPLACE this then corresponds to a WIN bet and a PLACE bet.

In combination with BOX - the order of entry is not important (of course the price for the betting slip increases!)

With the PICK-n bets, the racetracks from the USA mostly offer guaranteed prize pools of up to 1 million US dollars.

There are also two other lottery-like competitions, which are particularly popular in the Anglophone sector and are closely linked to horse racing, namely the Sweepstakes and the Calcutta - the former are inextricably linked with the Grand National in Great Britain , the latter with the Melbourne Cup in Australia .

The judge will decide how well a horse or the first five horses have won. The distances are given as follows: nose (N), short head (kK), head (K), neck (H) and length (L). In the past there was also the term while , which corresponded to more than ten lengths, and “ half the length ”. If two or more horses reach the finish line at the same time, it is called a dead race . The judgment also includes an evaluation (superior, easy, safe, fight).

Due to the betting system used in horse betting, money can be laundered in such a way that the origin of the money remains anonymous. However, due to the relatively low betting turnover, this is not seen as a problem for Germany.

As in other areas of sport, doping controls are of considerable interest in equestrian sport. In addition to the classic test materials urine , blood and serum , the test material hair is of particular importance in equestrian sport . After appropriate sample preparation and possible immunoassays as preliminary tests, the substances in question can be determined qualitatively as well as quantitatively by coupling chromatographic methods with mass spectrometry .

One of the most famous and controversial horse races that is not held in a special horse racing track is the Palio di Siena . It emerged from a competition between the inhabitants of competing districts of Siena. Today the Palio only has a traditional, folk festival-like, tourist significance, it was never used for horse sport breeding. Curiously, a riderless horse can win the Palio.

Before the start of many horse races, there is a gallop in which the racehorses run to the starting machine , mostly along the grandstand and at a slow pace. The gallop serves to warm up the horses and to prepare the spectators for the race. The term is often transferred to other events, such as stars on the red carpet .

Ban'ei are Japanese horse races for the heavy train that are held on sand. Cold-blooded animals pull steel sledges, which weigh up to a ton, over sand-covered ramps. They are steered by a driver who stands on the sledge and drives them with blows with the end of the line . The team that is the first to completely cross the finish line wins. The spectators appreciate the power of the big and strong horses . Ban'ei are mainly held in the winter season. Due to the heavy loads, most of the gait is walking and the spectators can walk next to the horses during the races.