The Palio di Siena (sometimes also: the Palio, Italian Il Palio ) is one of the toughest horse races in the world. Palio in Italy generally refers to a competition between neighboring areas that is carried out with horses. The Palio of Siena is held in the central square of the city, the Piazza del Campo . In the race today the 17 Contraden (German area), the districts of Siena, compete against each other (see: Rules). It has been held twice a year since the Middle Ages and is considered the most important cultural event in Siena. The race on July 2nd takes place in honor of the Madonna di Provenzano ( Palio di Provenzano ), the race on August 16 in honor of the Assumption of Mary ( Palio dell'Assunta ).

The name Palio comes from the Latin pallium . Pallium means cloth or cloak. Later the word got the meaning of flag or standard . As the winner of the respective Palio di Siena, the winning contrade receives a colorful standard as a prize (called Palio ), which is redesigned every year. This standard is a silk banner on a halberd . The motifs used are the Madonna and the symbols of the participating contrades.

The rules and conditions

The Palio is held twice a year in summer, always on July 2nd and August 16th. 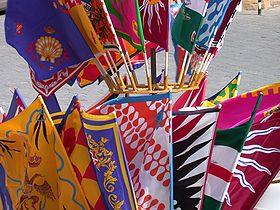 Flags of the contrades

Each of the 17 contrades is represented by a rider and a horse. Both bear the colors and coats of arms of the corresponding contrada .

Only ten of the 17 contrades are allowed per race, namely the seven that had to sit out in the previous year in the corresponding race and three contrades that are determined by lot.

The two annual races are viewed independently of each other. The above procedure for determining which contrade will participate will be applied to the July-July races and August-August races separately. This increases the excitement and limits the chance of participating in both races in one year. If a contrade can win both races in one year, this victory is called “cappotto” (English coat). However, this happens very rarely. 2016 (Lupa), 1997 (Giraffa) and 1933 (Tartuca) were the last three cappotto victories. In the history of the Palio there were a total of 17 “cappotto”, of which Giraffa, Civetta, Torre, Tartuca and Lupa twice each. Aquila, Istrice, Leocorno, Oca, Pantera and Selva have never been able to achieve this. Mostly mythical, exotic and absurd heraldic animals such as forest, shell, wave, caterpillar and unicorn hide behind fantastic banners and names.

The horses ( half-bloods ) that are used in the races are not owned by the contrades. A commission inspects a preselection of approx. 60 horses, of which 30 horses are allowed to take part in the “Batteria” (German preliminary round) four days before the race; ie in six or seven trial races the ten horses that take part in the race are selected. Some horses have to run a second time. Which horse goes to which contrade is then again decided by lot. This draw takes place four days before the race and is called “tratta” (German trade). You can tell from the cheers of the district whether the district has received a good or bad horse. On this horse, which barbero is called (dt. Berber) and is blessed before the race in the Church of the respective contrade, day and night respects a groom ( barbaresco ).

Even the fantini , the riders, do not belong to any of the contrades. These jockeys are hired. The fantino receives his fee from the respective capitano (German team leader) of the contrade. The latter is elected for four days and during this time is given absolute authority over his contrade.

The racetrack is an approx. 300 m long circuit on the outer ring of the D-shaped Piazza del Campo. A special covering (a mixture of tuff and sand) 20 cm thick is applied to this ring and tamped down so that the horse's hooves find support. The width of the track is 7.5 m.

The entry ( passeggiata ) of the contrades into the Piazza del Campo is very impressive. First come the contrades participating in the race. In the first place comes the page ( figurino ), who carries the standard of the contrade. Followed by the race horse ( barbero ), which is led by the groom ( barberesco ). The jockey ( fantino ) follows on a parade horse ( soprallasso ) that is only provided for entry . After the participating contrades follow the seven contrades that do not take part in this race. Behind these follows the flag carriage ( carroccio ) with the Palio pulled by four oxen . This banner is given to the victorious contrade.

Racing scene shortly after the start (2008)

Before the race there is a historical parade in which the contrades present themselves in medieval costumes and their coats of arms. After the contrades have moved in, the start master ( mossiere ) ensures that the horses and riders take the correct starting position, which is also decided by drawing lots . The start takes place on the start line ( canapo ) and is triggered when the tenth rider enters the Mossa (start area). Due to the tight squeeze on the pitch and the general tension, this is more than difficult and false starts occur regularly.

After the start, the race takes place three times. For this, the riders on their horses usually need about 100 seconds.

The horses are ridden unsaddled. In the travel itself, contradictions are permitted, including the use of ox Ziemers (nerbo) against the competitors (horse and rider). It is forbidden to pull another rider from the horse, but it happens again and again, even if such an offense results in a penalty for the district (and possibly also for the rider) (usually ban for one or more races).

The winner is the horse that crosses the finish line first after the last lap. The rider does not necessarily have to finish. A horse without a rider is called a "scosso" (dt. Shaken). However, it is important that the horse continues to wear the contrade's diadem on its forehead. If it loses this, it is out of the running. A scosso victory is not uncommon as the horse can run faster without a rider. It is more important than one's own victory to prevent a possible victory by the opposing contrade.

As a rule, it is not the fastest horse that wins, but the happiest with a daring and skilled rider.

The runner-up is traditionally seen as a real loser, even worse than the last.

Since 1970 around 50 horses have died in accidents during the race. Italian animal rights activists criticize the race as cruelty to animals. Sharp curves on the course ensure that the horses run unchecked against the walls of houses; In some places the masonry was therefore padded.

Around 60,000 visitors stand inside the circular path to watch the race, which lasts barely two minutes. The attraction of the Palio for many visitors is that they experience a physical immediacy of victory and defeat in an archaic, Gothic setting. 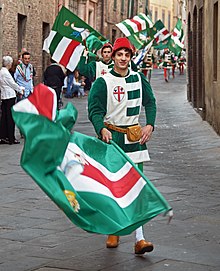 Parade of the contrada "Oca" ("goose") through the old town 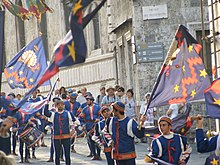 Relocation of the contrada "Nicchio" ("shell") 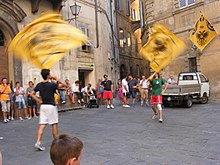 The contraden ( le contrade ) can best be described as neighborhood communities that also represent the districts of Siena.

Each contrada venerates its patron saint, has a church, a parish hall, a house for keeping trophies, certificates and historical costumes. There is also a fountain where the new contradaiolo receives his secular baptism. A citizen of Siena is born into his contrade and belongs to it until death. The citizens of the contraden are called contradaioli .

In earlier times there were a greater number of contrades. Today 17 contrades still exist. There are large and small, rich and less affluent contrades. The contrades that exist today are:

Among the contrades that have disappeared, the oak, the viper, the bear, the lion, the rooster and the sword should be mentioned.

Historically only partially traceable, but traditionally "enemies" are: she wolf and porcupine, eagle and panther, snail and turtle, giraffe and caterpillar, unicorn and owl, ram and mussel and tower with goose and wave.

If you stroll carefully through the old town of Siena, you can discover the signs of the contrades on several buildings. These mark the boundary of one contrada to the next, adjacent contrada. Contradaioli also mark personal items with the symbols and colors of their own contrada.

From 1900 to 2014, the following contrades were most frequently victorious: (each of the first three places)

The film No closed season for blondes from 1957 was shot mainly in Siena and ends with a staged Palio. In the James Bond film Quantum of Solace , which begins in Siena, scenes from the 2007 Palios are shown. The race also forms part of the backdrop in the 1987 film Der Grummbär . The American short documentary Grandad of Races , which was nominated for an Oscar in 1951, is entirely dedicated to the Palio di Siena. The life of the mare Gaudenzia , who won the Palio four times, was described by Marguerite Henry in the novel The Sieger von Siena .