The title of this article is ambiguous. Further meanings are listed under Siena (disambiguation) .

Siena is the capital of the province of Siena and is considered one of the most beautiful cities in Tuscany and Italy. It has always been in rivalry with Florence , politically, economically or artistically. While Florence as a prime example of a Renaissance - town particularly impressed by the sheer mass and size of its architectural and art, Siena has the medieval character of Italian Gothic received. The historic old town has been a UNESCO World Heritage Site since 1995 . The University of Siena , founded in 1240, is one of the oldest universities in Italy and is now attended by around 20,000 students. Saint Catherine of Siena comes from Siena .

Siena is also known for the Palio di Siena , a horse race that takes place in the central square of Piazza del Campo . In the race, which has been very important for Siena since the Middle Ages, ten of the 17 districts ( contrade ) of the city compete against each other twice a year .

Siena is the seat of the Banca Monte dei Paschi di Siena , the oldest still existing bank in the world, which is also the third largest bank in Italy.

Location of Siena in the province of Siena

Siena is about 50 km south of the regional capital Florence and about 185 km northwest of Rome . It lies in the climatic classification of Italian communities in zone D, 1943 GR / G. It borders the Chianti to the north , the Crete Senesi to the southeast , the Maremma to the southwest and the Montagnola Senese to the northwest .

The historic old town is divided into three terzi (thirds), in which several contrade (districts) are combined (17 in total) and all of which are within the city ​​walls of Siena . The contrades are named after their coats of arms (mostly animals) and are opponents in the famous Palio horse race , which takes place once a year in July and once in August. The organizational form of the contraden as a democratically and socially manageable residential area was cited as the reason for the very low crime rate in Siena. The system was financed primarily by the local Banca Monte dei Paschi di Siena and its foundation, which, however, stopped making annual payments in the three-digit million range in the course of the euro crisis from 2011.

→ Main articles : History of Siena  and Republic of Siena

Siena probably goes back to an Etruscan settlement called Saena and became a colony called Saena Iulia under Roman rule . The city did not gain its real importance until the Middle Ages. Like other Italian cities, it gradually gained independence and had a consular government in the 12th century.

In the dispute between the emperor and the papacy, Siena - in contrast to Florence - was on the Ghibelline side and thus received various privileges. Essentially, however, behind this conflict was an economic rivalry between the two trading cities. In the battle of Montaperti in 1260 the Florentines were defeated. However, the following years saw the Ghibellines decline. Inside, there were repeated political power struggles that did not prevent the city from flourishing economically.

In 1389 the Senese made an alliance with Gian Galeazzo Visconti , which made them dependent on Milan for a few years .

In 1487 Pandolfo Petrucci seized power and ruled despotic, even if he did not formally interfere with the forms of government. Unlike the Medici , who ruled Florence in a similar way , he did not succeed in founding a dynasty, and after his death in 1512 the city soon came under the protection of Charles V. The citizens rebelled against the increasing tyranny of the Spaniards, but In 1555, after a long siege, Siena was taken and two years later given as a fief to Cosimo I de 'Medici , under whom it became part of the Grand Duchy of Tuscany . 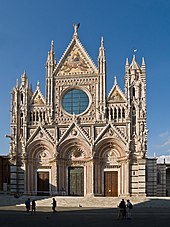 The facade of the cathedral

The cathedral made of black and white marble, today one of the most important examples of Gothic architecture in Italy, emerged from a three-aisled Romanesque basilica . Today the building still presents itself as such, but with a Gothic raised and vaulted central nave , a complicated, multi-nave transept and a Gothic choir . The irregular hexagonal dome over the crossing , which is responsible for many of the irregularities of the building, remained Romanesque . Construction began at the beginning of the 13th century and continued into the 14th century.

A last enlargement was started in 1339, but was never completed due to lack of money and problems with the statics; today only the north aisle and facade of the so-called "Duomo Nuovo" can be seen, which indicate the magnificence of the unfinished plan. The church, which would have continued to use today's cathedral as a transept, was supposed to exceed Old St. Peter , at that time one of the largest churches in the world. The building also includes the San Giovanni Baptistery , which is installed in the substructures of the cathedral choir. 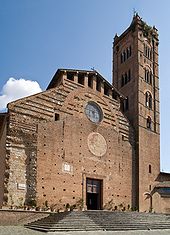 In addition to the cathedral choir window, the Opera del Duomo also contains Duccio's famous Madonna, which was painted for the cathedral between 1308 and 1311 , as well as other works of art that come from the context of the cathedral. Through the museum you can enter the facade ( facciatone ) of the "Duomo Nuovo", which was never completed (see above).

Opposite the cathedral is this pilgrims' hospice , which was founded shortly after 1000 and has about four times the building volume of the cathedral. Various halls and chapels are of interest on the upper floor: next to the entrance you can see the chapel of the SS.  Annunziata , which was built in the 15th century and adorned with a grandiose fresco in the apse in the 18th century . This is followed by the so-called Sagrestia , which Vecchietta painted. The large hall in the center of the hospice (Pellegrinaio) is completely painted, most of the frescoes are by Domenico di Bartolo , but Vecchietta and Priamo della Quercia also executed individual scenes. The two basement floors, which have a cave-like character, are of great interest. Some of them have been furnished in different eras, and today they also house many works of art, including a large collection of ancient urns and an altarpiece by Taddeo di Bartolo . 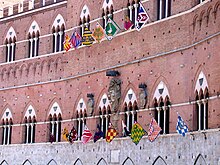 Facade of the Palazzo Pubblico

The Palazzo Pubblico ( City Hall ) is a palace whose construction began in 1297 as the seat of the Republican Government , the Podestà and the Council of Nine .

The palace is centrally located on Siena's main square, the Piazza del Campo ; the square was laid out in the 14th century on the site of an ancient theater; In 1347 it received its characteristic red brick paving, which is segmented by light strips of travertine . This is also where the Palio di Siena takes place, an annual local horse race.

In the palace itself there are numerous famous frescoes such as the one that Guidoriccio da Fogliano shows in the room of the maps (Sala del Mappamondo). The fresco is probably by Simone Martini . The wall of the room also shows the remains of a drawing of a world map by Pietro Lorenzetti . One of the most famous works in the palace is the depiction of the Good and Bad Government in the Sala della Pace by Ambrogio Lorenzetti .

The 102 meter high tower of the palace (Torre del Mangia) was built between 1325 and 1344, its top was designed by Lippo Memmi . It is open to the public and from its top offers a very good view of the city and its surroundings.

The institution is a respected music and art academy from the first quarter of the 20th century. She organizes u. a. in September the Siena Music Week and other courses to further educate young musicians.

The art museum, inaugurated in 1932, contains works from the 13th to the 16th centuries by important Senese artists.

The bank, founded in 1472 and headquartered in Siena in the Palazzo Salimbeni, is the oldest bank in the world.

Palazzo Tolomei on Banchi di Sopra Street was built around 1205 and is the oldest city palace in Siena. It was later extended and rebuilt. The Cassa di Risparmio di Firenze has its seat here today.

Underground tunnel system for the (former) water supply of Siena.

The local football club AC Siena played from 2003 to 2010 and again between 2011 and 2013 in Serie A , the top division of Italian football. After descending the end of the 2012/13 season , the club wore since his point games back in the Serie B from. Because of the financial problems of the club plays at the moment in the fourth division Serie D .

In basketball, the Mens Sana Basket Siena club was the dominant team in the top Italian basketball league for years and won the championship in 2004 and 2007 to 2013. Due to financial problems, however, the forced relegation to the amateur field took place in 2014.

Siena benefits from several major transport axes. The SS2 Via Cassia , which leads from Rome to Florence , should be mentioned here . It is also on the E78 Grosseto - Fano , which leads west via the SS 223 di Paganico to Grosseto and via the SS73 eastwards to Fano or Perugia and the A1 autostrada towards Rome and Naples . The four-lane expansion of the E78 is currently underway. To the north there is a connection to the four-lane Raccordo autostradale 3 , which leads to Florence and the A1 autostrada in the direction of Bologna . To the west of the city runs the Strada Statale 674 Tangenziale Ovest di Siena , which allows heavy and through traffic to bypass the city.

The regional airport Siena-Ampugnano is located around twelve kilometers southwest of Siena in the municipality of Sovicille (district Ampugnano) . The planned expansion of the airport is controversial.

Siena is behind the long-distance traffic of Trenitalia . Only regional trains run on the railway lines to Empoli , Chiusi and Grosseto .

The inner-city public transport is handled by the city ​​buses of the local company Siena Mobilitá, which also operates overland routes to the surrounding area. There are currently 15 bus routes in the city network of Siena.

There are partnerships with Avignon in the region Provence-Alpes-Cote d'Azur , with Weimar in Thuringia and Wetzlar in Hesse .

→ Main article : List of sons and daughters of the city of Siena

Municipalities in the Province of Siena in the Region of Tuscany