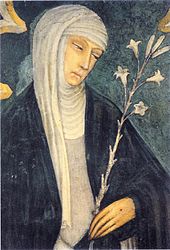 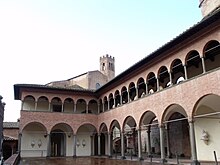 The Santuario di Santa Caterina in Siena, in the background the Basilica of St. Dominic 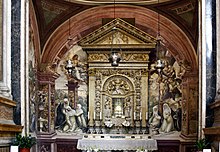 The chapel of St. Catherine in the Basilica of San Domenico in Siena houses some of her relics 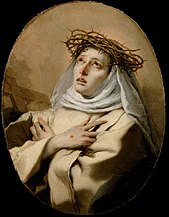 Depiction of Saint Catherine of Siena with stigmata (oil painting by Giovanni Battista Tiepolo , around 1746)

In Avignon she succeeded in 1376, Pope Gregory XI. to move back to Rome. As 1378 under Urban VI. a split in the church threatened, it worked for a peaceful solution. Catherine was canonized in 1461, declared the patron saint of Italy in 1939, promoted to doctor of the church in 1970 and declared patron saint of Europe in 1999.

Catherine of Siena was born on March 25, 1347 as Caterina Benincasa. The house where she was born is now a museum and is known as the Santuario di Santa Caterina . She was the second youngest of the 25 children of Jacobo Benincasa and Lapa Di Puccio Di Piagente, who belonged to the nobility. Since the family was impoverished, her father had to earn a living as a wool dyer. Most of her siblings died early of the plague . Katharina grew up without training; She learned to read and write much later.

Tradition has it that she had her first vision when she was about six years old. Above the roof of the Dominican church, she saw “a beautiful bridal chamber adorned with royal splendor. In it she saw the Redeemer of the world , the Lord Jesus Christ , on a ruler's throne, dressed in episcopal robes and the tiara , the king and papal crown, on the head ”, as well as the apostles Peter , Paul and the evangelist John . After this vision, Katharina withdrew more and more and looked for solitude. She scourged herself, prayed instead of playing, and ate less and less.

According to Raimund von Capua, Katharina vowed eternal virginity to the Blessed Mother at the age of seven . When she reached the marriageable age of twelve, she is said to have initially refused to place undue importance on her appearance. She resisted her parents' marriage brokerage and came into conflict with them as a result. In a vision, Catherine is supposed to meet St. Have seen Dominic among other saints. He showed her the vestments of the Sisters of Penance of St. Dominic and promised her to be allowed to belong to this order. She saw herself as a Dominican in the future and was supported in this by her family. She moved into a cell in the parental home and devoted herself to prayer and severe penance exercises .

A vision, the mystical marriage , is said to have radically changed Katharina's life. In this vision Christ appeared to her who put a ring on her finger and said to her:

“See, I will marry you, your Creator and Redeemer, by faith. You will always keep this faith intact until you will celebrate an eternal wedding with me in heaven. From now on, my daughter, do with confidence and without any hesitation what my accompanying provisions will impose on you. You are now strengthened by the strength of faith and so you will happily overcome all your adversaries. "

Katharina then went public. She put her life at the service of her fellow men. Physical penance exercises now faded into the background. She helped in the household of her parents and supported the poor, the sick and prisoners. She became the spiritual mother for many, including Mantellatinnen, acquaintances, friends, Dominicans and employees of the Sienese hospitals.

The influential Dominican Raimund von Capua was assigned to her as confessor . He was to accompany her throughout her life as a consultant and interpreter, after her death he wrote Katharina's biography, the Legenda maior .

On April 1, 1375, her stigmatization is said to have taken place in front of a cross in Pisa : The wounds of Jesus are said to have appeared on her body in a miraculous way, which, however, could only be recognized by Katharina herself.

In addition to church issues, Katharina also spoke out on political and social issues - extremely unusual and sensational for a woman at this time. This may also be the reason why Catherine was summoned to appear before the General Chapter of the Dominican Order in 1374 ; Documentation is not received.

She gave public speeches and - whenever she considered it necessary because of her ties to the church - also sharply criticized those responsible for the church and politics. Soon their reputation spread across Europe. People from all countries asked her for advice - including even the Pope , whom she did not spare, but also warned him prophetically. However, she did not revolt against papal authority. So she put it:

“And even if the Pope were a devil incarnate instead of a kind father, we would still have to obey him, not because of his person but because of God. For Christ wants us to obey his representative. "

In 1376 Katharina traveled to Avignon . She convinced Pope Gregory XI. to return to Rome . A year later the great schism began , with Catherine to Pope Urban VI. was standing. At his request, she moved to Rome. From there she fought for the unity of the church and for a peace solution in crisis-ridden Italy.

She repeatedly campaigned for a "holy, sweet" crusade and longed for a reconquest of Jerusalem; their understanding of world peace was closely related to the necessary military victory over Islam. 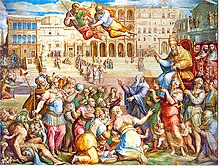 Catherine died at the age of 33 on April 29, 1380 near the church of Santa Maria sopra Minerva in Rome; she was buried in the local cemetery. After it was reported that miracles had occurred at her grave, her confessor, Raimund von Capua, had Katharina's remains brought to the Capella Capranica of the basilica. Her relics have been in a shrine under the high altar since 1855 . Her head was set in a bronze reliquary and later sent to her hometown of Siena. The Basilica of San Domenico in Siena also has a thumb relic of St. Catherine. When her remains were exhumed for the first time in 1430, her body was unharmed; when she was last exhumed in 1855, they were still surprisingly well preserved.

The grave of St. Catherine in the church of Santa Maria sopra Minerva in Rome

Catherine of Siena was canonized in 1461 and declared patron saint of Italy in 1939 . Pope Paul VI In 1970 she raised her to the position of Doctor of the Church (" Doctor Ecclesiae universalis "); In 1999 she was founded by John Paul II together with St. Birgitta von Schweden and Edith Stein were raised to the patronage of Europe .

Catherine is venerated in the Catholic Church as the patron saint of Europe, Italy and the city of Rome . She is called to ward off fire , plague and headaches and is also the patroness of the nurses, the dying, the parish secretaries and the laundresses. Mostly it is represented with the attributes lily , book, crucifix , crown of thorns , heart, stigmata , ring , dove, rose, skull or a ship model with the papal coat of arms. 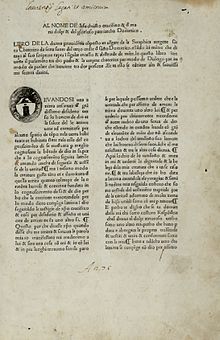 Of the letters she dictated because she was barely able to write, over 380 have survived. These not only represent an important testimony to their time, but have also established their reputation as teachers of the church because of their theological density. They are now completely available in German, e.g. B .: