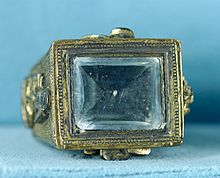 The ring is one of the most famous forms of jewelry. It can be found in all cultures as jewelry for the hand or foot. Ear and nose rings , on the other hand, belong to the needles.

The oldest known rings are more than 21,000 years old; for example the finger rings made of mammoth ivory that were found in Pavlov in the Czech Republic .

Rings were not only used as jewelry, but also represented objects of value that could serve as a means of exchange and payment . This ring money is one of the prior coinage and belongs to the field of jewelry money.

Rings were originally made from bones , probably also from wood and stone (e.g. amber ); later also made of bronze , iron , precious metals and glass . In the course of cultural history, rings have developed a wide variety of meanings.

Rings were among the most popular pieces of jewelry of the upper class both in the European Middle Ages and in antiquity. Signet rings were symbols of power and dignity. In addition, rings functioned as early as the High Middle Ages, but probably also in antiquity, as a symbol of love and loyalty when entering into marriage, and in the early modern period increasingly as a personal memorial or mourning ring . In the Middle Ages there were protective and healing rings that contained a toad stone, for example. The custom persisted beyond the Renaissance.

Rings became symbols of rule, assigned the wearer to religious communities, served ritual purposes, such as mourning , or documented the marriage vows . In addition, rings were always used for self-expression .

The choice of material, the value, the artistic design and the iconography are decisive for the importance of a ring as jewelry. Rare and therefore precious material as well as a beautiful design of the ring are the basis on which the symbolism of the ring is based.

Rings also express ties and relationships in the story. There are stories in which birds separate lovers by ring theft ( Magelone ) or innocent people are suspected of theft ( Grimm's children's and house tales : The white snake ; German legends : Idda von Toggenburg ). See also The Ring of Polykrates . Often the ring or the ring half serves as a recognition mark ( AaTh 974 Homecoming of the husband ; KHM 25 , 65 , 67 , 93 , 101 ). Magic rings are extremely common: Fastrada , Friedrich von Schwaben , Grimms Deutsche Sagen No. 529 The noble Moringer . A modern example is JRR Tolkien's The Lord of the Rings .

The ring also plays a special role in the so-called ring parable from Lessing's work Nathan the Wise .

An engagement ring is a ring that symbolizes the promise to marry someone else .

Putting the wedding ring on the left ring finger when getting married, the most common variant worldwide 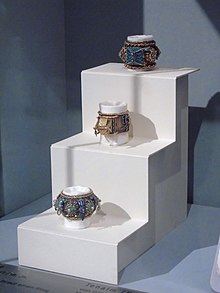 Jewish marriage and engagement rings from the 17th and 18th centuries.

Even in early antiquity, the wedding ring symbolized infinity and durability. Both the ancient Egyptians and Romans wore the wedding ring on the ring finger of their left hand. The reason for this was the idea that a vein, the so-called vena amoris ( Latin for 'love vein'), leads directly from this finger to the heart. In ancient Rome , only women wore a marriage or engagement ring. The latter was mostly made of iron and was considered a sign of commitment, but above all as a "confirmation of receipt" for the dowry . Depending on the culture and social class, the handing over of a ring to women only lasted well into the past century.

Wedding rings are often provided with inscriptions or symbols in the inner ring band. In ancient Roman rings, for example, you can find “Pignus amoris habes” - “You have a pledge for my love”. In today's wedding rings, the name of the partner and the date of the promise can often be read.

Since the 2nd century BC There were also golden rings in the shape of two hands clasped together. According to Livy, gold rings were found in large numbers on the battlefields of southern Italy, which is explained by the fact that they must have been wedding rings. The wedding ring has had its sacred significance in the Christian church since Pope Nicholas I (around 850). The ring has been an integral part of the church wedding ritual since the 13th century.

Even the Judaism knows a wedding ring ; However, this is only used ritually ; During the wedding ceremony, such a ring is put on the index finger of the bride's right hand.

A pair of rings is a common symbol of marriage, with one ring often being passed through the other. The rings themselves are also given symbolic meaning. Their circular shape has no end, intertwined rings cannot be separated without damaging them, they resemble the modern symbol for infinity ( ∞ ), and most durable materials are used - all symbols for the concepts of eternity, which have a positive connotation in the context of marriage and connectedness . Special ring shapes also carry religious significance such as the use of three-part rings to symbolize the Christian Trinity .

Ring made of different materials that dissolves when worn due to abrasion and / or decomposition (e.g. due to reaction with sweat). The ashes of the dead or other substances associated with the dead may be included in the material. 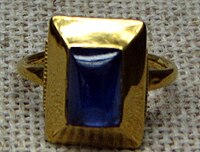 The ring has been one of the insignia of consecrated virgins since the 7th century . Based on this old custom, nuns and nuns in some orders wear a ring after their solemn profession . In both cases the ring is a spousal symbol of the bond with Christ .

Abbot - Bishop - and Cardinal's ring and the Fisherman's Ring of the Pope are also insignia. Often these rings are processed with an amethyst (stone of grace and wisdom).

Rings as an award for artistic achievements

Some of the prizes that artists are awarded are finger rings. The Iffland-Ring , donated by the Austrian Federal Government and awarded for life, is awarded in will by its bearer to the most important and worthy stage artist in German-speaking theater. Instead, female stage performers receive the Alma-Seidler-Ring . The city of Goslar and the Association for the Promotion of Modern Art Goslar e. V. give the Goslarer Kaiserring annually as an undoped award to contemporary visual artists.

The ring, which was used to protect the thumb and was to be worn on its second link, was customary among the archery archery mounted or on foot in many armies.

In 1835, graduate rings were first issued to officer candidates of the American Military Academy West Point . Beyond military academies , such rings are now common in many high schools, colleges, and universities in the United States and Canada. They symbolize the togetherness of the respective year, the solidarity of the graduates with their alma mater and the successful graduation.

Rings that also fulfill a function

The poison ring has been known since ancient times - a ring that is provided with an openable container that can hold a sufficient amount of poison (or medicine). The poison can thus be discreetly emptied into the victim's drink or food. The poison ring is a bizarre piece of jewelry that has always stimulated people's imagination. Especially during the Renaissance , the poison ring is said to have been a requisite for maintaining power.

Signet rings have also been known since ancient times. It is a ring-shaped punch . Rings with cylinder seals are known from ancient Egypt . In seal rings, cut layer agates are often used as sealing plates. 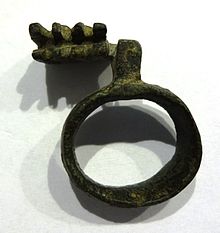 In ancient times, there were also rings that were not used as jewelry, but as attachments for keys. It was not a question of a ring that combines several keys, as we understand the term today, but of individual finger rings, each of which has a key attached.

A smaller version of the rosary is the finger rosary , rosary ring or soldier's rosary , which is used as a counting aid in prayer sequences . It generally has ten elevations, sometimes five, and a small cross. A so- called law can be prayed with him , which consists of ten Ave Maria and an Our Father , as well as the entire rosary, which consists of five laws.

Jewelers and goldsmiths measure the ring size of their customers with a standardized ring gauge . This usually has the shape of iron rings in corresponding sizes, which are grouped in a movable manner around a central ring that bundles them, so that the appropriate size can be determined by attaching the individual rings. Sometimes a simple template with holes in different sizes is used for this.

The personal ring size can also be determined by determining the inner diameter in millimeters (mm) of a well-fitting, existing ring using a caliper . This is then multiplied by the number of circles (rounded 3.142). The result is the ring circumference or finger circumference.

One method to approximate the ring size is to determine the circumference of the finger with the help of a piece of paper. For this purpose, a strip of paper a few millimeters wide is cut out and wrapped around the finger. The intersection of the paper is marked on the two overlapping layers and the distance between the markings is then measured with a ruler. However, this method does not take into account that rings have to be worked differently depending on their shape, the shape of the finger and the shape of the knuckles in order to be comfortable to wear.

In addition, the fingers swell over the course of the day and are also slightly thicker in summer than in winter due to the higher temperatures.