The title of this article is ambiguous. Further meanings are listed under goldsmith (disambiguation) .

Goldsmith is the job title for a fine blacksmith who makes jewelry and objects from precious metals (→ goldsmith's art ). The goldsmith's profession is one of the oldest metal crafts. It does not require admission and requires manual skills and artistic skills. Even today, goldsmiths often do all of the material processing in-house. The metals are often alloyed , melted, cast, rolled and processed into sheets or wires themselves . The materials are also machined using a variety of methods such as forging , brazing , riveting , welding , engraving and punching . 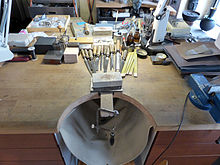 Workplace of a goldsmith: work board with trough-shaped fur to catch the filings 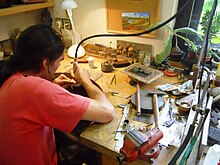 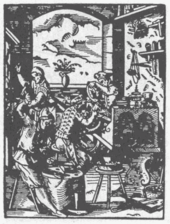 The goldsmith from Jost Amman's book of estates, 1568 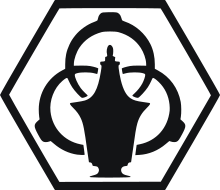 Gold and silversmiths in history 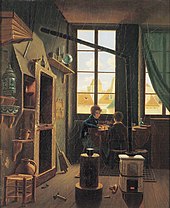 For the historical development of the artistic and technical aspects see the main article goldsmithing .

As long as the processing of precious metal was organized in guilds , i.e. in most Central European cities since around the 14th century, the goldsmiths' guilds included both those craftsmen who were more involved in jewelry and precious stone work, i.e. today's goldsmiths, as well as the workshops , in which mainly silver body pieces and cutlery were made. As masterpieces, besides gold jewelry, the manufacture of silver vessels was also required (e.g. in Bremen around the middle of the 19th century a silver body piece, a gold box and a gold ring with stones). Gilding was also an indispensable skill for the silversmith. It was only with the dissolution of the guilds, in Germany between 1810 and 1860, that the term “silverworker” or “silversmith” could replace the professional title “goldsmith”, especially since the middle of the 19th century when a specialized silverware industry flourished then again with the new orientations of handicrafts in the 20th century. Goldsmiths were occasionally also Münz-Wardeine , since they had mastered the technique of determining the fineness . Early copper engraving developed from the art of engraving , a decoration technique that spread in the late Middle Ages. Similar working techniques have always been used in other metal professions, such as chasing , guilloché and making watch cases or cast models. Others have only developed more recently.

In the list of patrons , St. Eligius is listed as the patron saint of goldsmiths.

As a rule, precious metal alloys ( gold , platinum , silver , palladium ) are processed and a large number of other materials, such as precious stones , pearls , ivory , enamel and rubber ( rubber ), are used for further design . Furthermore, stainless steel and rather rarely iron , non-ferrous metals as well as wood and plastic are used.

Depending on the focus of production, the profession is strongly characterized by manual work and is seldom structured on an industrial scale. Imagination , patience and pronounced motor ( eye - hand ) skills are prerequisites for the work processes , which are mainly carried out while sitting at the workbench . But since some work, such as B. forging, rolling or drawing, must also be carried out standing and with a great deal of force, a certain level of physical fitness is also required. The soldering work, which is often still carried out with a mouth soldering tube, also requires good lung function, but a soldering gun based on the Bunsen burner principle or with compressed air supply is preferred for heating larger workpieces as well as for melting work. Propane oxygen is also used for higher melting metals. Handy Hydrozon devices (oxyhydrogen gas generators) for soldering with fine flames and very high temperatures have been around since 1975. Post-treatment of the products, such as grinding, fine grinding and polishing, as well as the often required electroplating with different colored gold coatings or other precious metals (silver, platinum, rhodium, palladium), as well as the associated galvanic pretreatment techniques, are everyday tasks of the goldsmith. Laser welding devices have been increasingly used in goldsmiths' studios since around the mid-1990s . This technology made a lot of work possible that was previously impossible due to the high thermal conductivity values ​​and temperature sensitivity of many jewelry components. Since the turn of the millennium, CAD techniques and rapid prototyping processes have slowly begun to establish themselves in the goldsmiths' workshops. This goes hand in hand with the professionalization of casting technology, which makes it possible today to produce pieces of jewelery from precious metal with accuracies in the micrometer range.

Anyone who takes a master's examination in one of the two professions today holds the title of master gold and silversmith. Neither a master craftsman's certificate nor a passed journeyman's examination are required to run a gold or silversmith business. With the amendment of the Crafts Code on January 1, 2004, the goldsmith's trade was released from the area of ​​the crafts subject to authorization in Appendix A to the HwO and assigned to the area of ​​the non-licensed crafts (Appendix B1 to the HwO).

If you want to specialize in design as a goldsmith, you can professionalize yourself at one of the design academies to become a designer in the craft. A one-year full-time course or the two-year part-time variant is offered.

His memory of the patron saint is cherished in the nationwide organized Eligius Guild.

In Austria there is the apprenticeship gold and silversmith and jeweler. The dual apprenticeship training is 3.5 years and can be completed with a master craftsman and proficiency test.

Today's basic vocational training goldsmith EFZ summarizes the former apprenticeships goldsmith, jeweler and silversmith. The previous professions can now be found in the fields of gem setting, goldsmithing and silversmithing

Master goldsmiths, master silversmiths and master jewelers have the same examination regulations, whereby the peculiarities of the profession and material are of course taken into account during the examination. The exam itself is a higher technical exam .

Have considered over the centuries from the precious metal - forging the Work Place ( Brightsmith , together with the related silversmith out to develop new professional fields):

Goldsmiths from other European regions are only known by name from a later period, for example from Belgium and Spain (from the 11th century), from the Netherlands, Poland and Portugal (from the 12th century). Norway (from 14th century), Sweden (from 15th century). For medieval craftsmen and artists, it is by no means unusual that the attribution of goldsmith is just one of several areas of activity (job titles).

The better-known goldsmiths since the Romanesque period (11th / 12th centuries) include:

A detailed list of literature on the master's marks of goldsmiths can be found in the article silver marks .