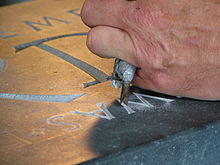 Engravings are incisions of ornaments , writings and decorations in metals , such as B. Brass , copper and silver ; Steel , glass , stone, and other solid materials. The profession for training is called an engraver . The shaping processing of wood , ivory and other soft materials is usually referred to as carving .

Classic hand engraving on metallic surfaces or on glass is carried out with a graver as a tool (or grinding tool for glass). The aim is to create a surface structure by removing material that stands out against the background.

The indentations created with the different shapes of the burin can also be covered with color paste and visually highlighted. This particular technique is used e.g. B. has been used for centuries in artistic printing technology. For metals, e.g. B. silver, a similar effect is created by a special melting technique ( Niellotechnik or black spot ).

The engraving , whether by hand or by machine, is metal-cutting machining, the locally removing material from the workpiece. This is also the case with glass engraving, since the process of grinding under the microscope is a multiple cutting process caused by the grinding tools. This clearly distinguishes engraving from etching , scoring or hallmarking (e.g. when driving copper), which are technically embossed . Here the work process takes place exclusively without cutting. This is particularly evident in the expression of a representation in different ductus or manner . While the line width can only be changed slightly with an etching or scratching, the line width can be made from very thin to very wide for an engraving with a graver.

Engraving in the field of panel painting

The engraving was usually done before the gilding by cutting shapes and ornaments with very differently shaped engraving irons into the thickly applied primer of medieval panel paintings.

Many medieval gold ground images have engraved gold grounds. The possibilities of this form of ornament are great. They range from simple line ornaments, zigzag lines, so-called wobbles or tremolations to stylized plant or animal motifs. These engravings were made with differently shaped engraving irons before the gilding, by "cutting out" the shapes from the thickly applied primer. Richly ornamented brocade fabrics, which had been in trade since the 14th century, served as models.

The earliest examples of this technique can be found in Catalan paintings of the late 13th century. This technique was first found in southern Germany from 1400 onwards. It reached its peak in the 15th century. 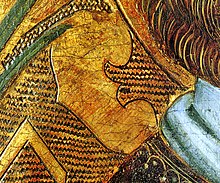 If a screwdriver-like flat iron is used for the engraving and this is pressed into the primer with slight pressure in left and right turns, this process is called wuggling or tremoling. 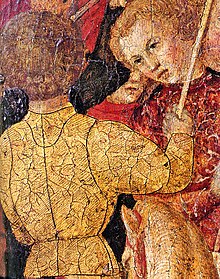 The alignment took place directly after the gilding in the already polished gold ground. The artist had to route immediately after polishing the gold, as long as the primer was still “damp” and elastic.

A special technique of engraving is wuggling, stilting or, as we say today, tremolating . When tremolating, the artist works with a flat iron or gouge and gently presses it into the primed surface in left and right turns. This creates a zigzag print. This technique became generally accepted north of the Alps after 1450. After the decoration, the bolus application, the gilding and the polishing took place. Immediately after the polishing of the gold surface was the trassieren , d. H. the impression of ornamental lines in the gold surface.

Engraving in the area of ​​the gilt

The so-called chalk base engraving also occurs with poliment gilding. The underground, e.g. B. a sheet of plywood, is first coated with warm glue so that the pores open and the wood fibers stand up. This creates a better connection between the subsoil and the chalk ground. Now begins the application of the stone base, which consists of rabbit glue and stone chalk. If necessary, some Venetian turpentine is added to improve the bond. Rough bumps are leveled with a chalk putty. Then the white ground is quickly applied, which consists of a combination of hide glue, champagne chalk, Chinese chalk and / or Bolognese chalk. The application is repeated about 20 times until a layer about 1 mm thick has been created. Closed rooms and a white background temperature of max. 40 ° C is important to avoid nits. These are small air bubbles that only become noticeable when the chalk base dries. They must not be filled with filler, otherwise an uneven surface tension will arise, which will lead to cracks. The surface is smoothed with sandpaper of different grains so that the optimal adhesion of the gold leaf is guaranteed and to be able to perfectly imitate the character of solid metal. Then the actual engraving begins. Ornaments or patterns are engraved into the hard chalk ground with an engraving hook. You have to be extremely careful not to slip, because a correction is not possible unless you apply chalk ground again. Then the yellow and, for a shiny gold plating, the red poliment is applied later. The red bolus is applied twice. The application is carried out with a fine hair brush in a crusade. The poliment consists of the colored bolus (clay) and gelatin. In the past, the poliment was bound with egg yolk. Now the primer for the gilding is given. After gilding, the smallest scratches and unevenness can be seen immediately. This technique is exhausting and very time-consuming.

A special process is electro-engraving, in which a vibrating pen is used to generate sparks at short intervals, which only change the surface of the material through melting and evaporation. Appropriate tools generate the vibrations through a magnet armature in the alternating field of an electromagnet and at the same time supply the necessary current flow, which causes a material change on the metal surface to be engraved with every contact. The process is related to eroding , but is mostly carried out by hand and without any liquid in between. Applications include engraving serial and batch numbers in machine parts.

Machine engraving is used in the production of signs or in mold making, in which the material is removed by rotating milling cutters ( milling cutter ) . Plastic materials consisting of layers of different colors can be used to produce permanent signs, with the engraving depth extending into a layer of different color. Also PCB prototypes can be produced in this way.

Various vector file formats can be used with the use of computer-controlled engraving machines . The vector data enable a lossless replication of the engraved motifs, which would not be possible with manual production.

The most modern engraving technology is laser engraving, in which the material is heated so much by the incident laser beam that it changes color, evaporates or burns, creating a contrast.

Areas of application are the permanent marking of electronic components, front panels, nameplates or the labeling of computer keyboards. The engraving of drinking glasses and floodlight signs made of Plexiglas are also areas of application.

The laser beam follows the contour or is guided line by line over the workpiece with a laser scanner , the laser is switched on and off in quick succession to cause an ablation at the required points. By controlling the pulse sequence or energy, it is even possible to generate semitones and in this way, for. B. to transfer photos onto metal or glass surfaces.

Another method is mask engraving, in which a mask that is located in the laser beam and that forms the template is reproduced on the workpiece in a reduced size. This mask can be fixed or a sequence of characters rotating like a character wheel . The laser pulse is so energetic and short that it removes the entire depicted contour of the mask with a single pulse.

A special process is the engraving of the inside of the glass to create a three-dimensional image inside a glass block. To do this, a laser beam is widened and focused on a microscopic point inside the glass, at which point the glass becomes opaque and milky. Such a picture emerges from a multitude of points.