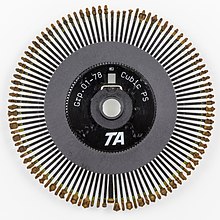 The daisy wheel (. English daisy wheel , literally daisy-wheel ) is next to Type lever and ball head of the most common types of carriers of electromechanical typewriters .

A type carrier in the form of a wheel is used for the manual production of embossed labels .

Mechanical cash registers each had 1 type wheel per column, which carried the types on the face.

The typewriter types are on a type wheel on resilient radial, i. H. arms arranged in a star shape. By turning the wheel, the desired character is brought into position and struck against the ribbon and paper with an electromagnetically operated pen . The font can be easily changed by exchanging the type wheel . Some manufacturers (e.g. Brother ) used a type wheel surrounded by a housing ( cartridge ) so that it remained protected even when changing and storing.

In the early days of the personal computer, typewriter manufacturers offered not only an RS-232 connection to the computer but also separate printers with a type wheel as computer peripheral devices. The type wheel printers achieved the significantly better typeface compared to the dot matrix printers common at the time , especially in connection with carbon ribbons . They were therefore suitable for business correspondence, but were limited to the character set of the type wheel.

The manufacturer-specific character wheel character set did not always match the PC character set. In such cases driver or TSR programs were used, which carried out the necessary conversion during printing in the background.

Around a hundred years ago there were already two type carriers who combined all types on a single body. They were the forerunners of modern ball heads and type wheels.

In an electromechanical typewriter with a type wheel, it is not the carriage with the platen, but the type wheel and its drive motor that move in the line direction.

In the so-called endurance runner , the earlier and now obsolete technology, the type wheel rotates constantly at a constant speed. In the simplest version, one of the type carrier rods is extended. With each turn, his nose briefly passes a forked light barrier and generates an impulse. The fixed time intervals between the impulse and the writing position of the types are electronically stored so that the pen can hit the stick with the selected type at the right moment. The stop pin strikes very quickly and quickly returns to its starting position, so that the type wheel does not have to stop and the imprint is nevertheless sufficiently clear. Instead of an extended type bar with a forked light barrier, other sensors for generating a synchronization pulse are also possible. In order to save energy, the "endurance runner" can also be switched off in a time-controlled manner during writing breaks. This technology was only used on very early type wheel printers.

While still used today change direction printing unit one is with most manufacturers stepping motor used for rotating the type wheel located on its axis by the shortest route forward or backward to the next required type. When Olivetti was used instead in some models DC motors with encoders, where the angle of rotation is monitored via a slotted wheel and a light barrier; the motor is then held in position by a high-frequency alternating voltage. Even rotational movements of the user when changing the type wheel can be recognized and corrected in this way. At the US manufacturer Exxon, the type wheel was the rotor of a linear motor; The print head was also the moving part of a linear motor, which enabled high printing speeds to be achieved. Since the type wheel stands still with each print, the stop pin can strike more slowly. The speed of this type of printer was increased by placing frequently used types next to each other on the type wheel. The type wheel is also designed to generate a pulse that is only required once for calibration (zeroing) after switching on the typewriter. Newer type wheels from Olivetti have small reflective surfaces on the inside, which have a different coding depending on the font. When you insert a new type wheel, the machine reads out this coding with one turn and recognizes the font type, velocity depending on the font size, nationality and step size of the font and automatically sets them, or refuses to use a type wheel that does not match the Keyboard matches.