DB- 25 connector as recommended by the RS-232 standard

The COM port on the PC is an RS-232 interface and is marked blue-green according to the PC-99 standard.

RS-232 ( R ecommended S tandard 232) is a standard for a serial port , which in the early 1960s by the US standardization gremium Electronic Industries Association  was developed (EIA) and up frequently in the 2010s when computers were available.

Until the early 1990s, mainframes and text terminals were connected with the aid of modems by point-to-point connections over the telephone line . The transmission of the data in both systems took place sequentially . Due to the original purpose of use, the interface shows some asymmetries in the definition of the control lines, which can lead to interconnection problems in the later common applications in completely different areas.

Back of a home theater AV receiver from Yamaha from 2012 - at the top right is an RS-232 interface, via which the device can partly be controlled remotely.

Fewer and fewer devices with an RS-232 interface are being produced worldwide. Examples are service and configuration connections on devices such as B. routers , switches , storage systems, laboratory equipment and point-of-sale terminals . Alternative serial interfaces offer more reliable and faster connection options. Only a few PCs are still delivered with a COM port, notebook manufacturers almost no longer offer this equipment option. In order to be able to operate and program devices that have an RS-232 interface with computers without this, there are converters from USB to RS232. Plug-in cards with RS232 interfaces for PCs are also available.

Many current devices with RS-232 only use three wires or pins (RX, TX, GND), so they do without handshake and control lines. Because of the low data rate, the comparatively low demands on the cabling and the high, tolerant signal level, the RS-232 is still widely used when it comes to interference immunity and long signal connections. In this respect, however, it is exceeded by twisted-pair network cable connections with transformers (“Ethernet”) and by the RS-485 standard.

Optical adapter plugs are available for electrical isolation and to increase immunity to interference, which draw their operating voltage from the signal levels, i.e. do not require their own power supply.

The current American version is officially called (ANSI EIA /) TIA-232-F and dates from 1997. The common name in the USA and Europe is RS-232 (RS stands for Recommended Standard ). For the question of the correct designation, see the section Labeling standards at EIA - Electronic Industries Alliance .

Schematic diagram for connecting two PCs using a modem via the telephone network:
RS-232 connections are used here between the PC and the modem

Further transmission standards such as RS-422 , RS-485 can be found in the article Serial Interface . 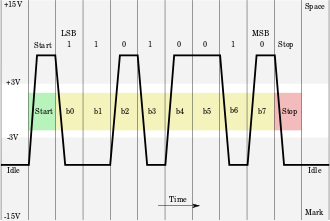 The standard does not specify bit rates, although it is mentioned that it is intended for transmission rates up to 20 kbit / s. Common UARTs that are used in conjunction with the RS-232 support transmission rates of 115.2 kbit / s and more. In order to achieve a defined transmission behavior, the standard prescribes a maximum edge steepness at the transmitter and a minimum edge steepness (depending on the bit rate) in the transition range of −3 V ... + 3 V at the receiver.

Some computers (like the Amiga) also accept +5 V for low and 0 V for high as input, so a simple inverter is sufficient.

Since the signal quality decreases with increasing cable length, the cable length is limited.

The runtime of the signal is a limiting factor. Since an RS-232 interface at the end of the line cannot be terminated with its characteristic impedance (power loss is too great), line reflections will inevitably occur. With increasing transmission rate and cable length, the reflections interfere more and more with the data transmission. The standard requires that the edge steepness at the transmitter must not exceed 30 V / µs, which limits the effects of the reflections. On the receiver side, a Schmitt trigger is used to produce a square-wave signal with a very steep edge.

Another aspect is that the signal transmission is not differential , but asymmetrical ( single-ended or unbalanced ). The signal to be transmitted contains a DC voltage component and is therefore relatively sensitive to common-mode interference . Such disturbances can e.g. B. arise through inductive coupling in the loop RxD-Gnd. Because all signals refer to the same Gnd signal, a current on the TxD line can generate a voltage drop on the Gnd line, which leads to a potential shift between the two communication partners and is seen, for example, on the RxD line and causes interference .

According to the original standard, a cable capacity of max. 2500 pF permissible, which for standard cables with a cable length of max. Equivalent to 15 m (50 feet ). With cables that have a particularly low capacity (for example UTP CAT-5 cable with 55 pF / m), 45 m can be achieved in accordance with the definition. The table on the right shows the empirical values ​​from Texas Instruments .

The problems of mutual influence via Gnd, missing terminating resistor etc. can be eliminated by differential transmission as with RS-485 , LVDS etc.

Pin assignment of the DE-9 connector (9-pin, male ), as it is normally available on the DTE

Pin assignment of the DE-9 socket (9-pin, female ), as it is normally available on the DCE

In order to connect two devices via the serial interface, the "hearing" lines of one device must be connected to the "speaking" lines on the other side. With terminals or computers (DTE - data terminal equipment) , “speaking” lines are TxD, RTS and DTR, “hearing” lines are RxD, CTS, DSR, DCD and RI. With modems (DCE - data circuit-terminating equipment) it is exactly the opposite; it forwards the signals “spoken” by the terminal to the opposite end and therefore has to “listen” to them, the other way round the signals “heard” by the opposite end are “passed on” to the terminal.

The practical identification of DTE and DCE devices is possible by measuring the quiescent level (voltage between GND and TxD or RxD, note the different assignment of 9- and 25-pin cables). Some modern devices recognize unconnected connections and switch off the output drivers in order to save energy. In this case, a suitable resistor between the signal connection and GND must be used to fool the presumed outputs into a connected counterpart.

The names and descriptions of the most important signal lines are based on the original use of the interface. “Remote station” in this table does not mean the other side (in the case of classic use, the one at the other end of the telephone line), but rather the local partner of the DTE (in the classic case a DCE (modem)). The line designations are the same for both DTE (PC) and DCE (modem) and are formulated from the DTE's point of view, but the properties of the connection (input or output) are different.

RTS / CTS was originally developed for half-duplex modems (like the Bell 202 ). Such modems switch off their transmitter when it is not needed; they have to send a synchronization signal when the transmitter is switched on again. If the computer (DTE) wants to send data, this is signaled via RTS. If the modem (DCE) has synchronized with the remote modem, this is signaled via CTS. Such modems are no longer used. Since synchronization is only allowed in one direction, the procedure is asymmetrical.

A symmetrical method that allows flow control in both directions was developed in the late 1980s. The meaning of the RTS signal has been redefined so that it indicates whether the DTE is ready to receive data from the DCE. Similarly, the CTS signals whether the DCE is ready to receive data from the DTE. This new definition is also known under the name "RTR (Ready To Receive)" (see CCITT V.24 circuit 133 and TIA-232-E). When speaking of RTS / CTS flow control, RTR / CTS flow control is often meant.