Card terminal from the manufacturer Ingenico 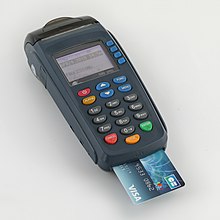 A POS terminal ("Point of Sale", in Switzerland EFT / POS terminal ), in German: cashless sales point , is an online terminal for cashless payments at a point of sale . He checks a debit card or credit card for card blocking and reports the test result to the point of sale.

When the triumphant advance of ATMs began to emerge in the 1970s , the banks came up with the idea of ​​replacing three cash handling processes with a single, cashless POS transaction: cash withdrawals, cash payments and cash delivery at points of sale. The transfer of funds from the account of the buyer to the account of the sales operation should be automated it. Accordingly, a POS payment is defined as a payment in which the payee has a POS terminal, the payment provider uses a corresponding card as the payment medium, and the authenticity of the cardholder (cardholder verification) is recognized without a disproportionate amount of effort and with a relatively high degree of security ( Authentication ) and the debit to the cardholder and the credit to the trading and service company are automated.

Some of the manufacturers of POS terminals active in Germany are organized in the Association of Terminal Manufacturers in Germany. V.

In 1968, the then chairman of the American Bankers Association, Dale L. Reistad, created the conceptual basis for POS systems with a vision of a cashless society. Not much is known about the first POS payment systems actually implemented, probably because they were only local projects that were not very successful. Based on the sparse literature, it can be said that the first POS payment systems went into pilot operation in 1971 after preparation and test phases and went into regular operation in the USA in 1972. They were payment systems with electronic POS terminals at retail and service companies that were tested by the City National Bank & Trust Company of Columbus (Ohio) in a suburb there and by the Savings Bank of Hampstead in Syosset (New York, Long Island) .

In the realization of the first POS systems in the US tried the banks to keep as close to the settlement of the then young ATMs, which meant that the first POS terminal with debit cards and PIN code were to use . The first two POS systems were technically successful, but commercially a failure, because in both cases they were limited in terms of space (only one district or one location was covered) and customers (only business customers and private customers of a bank could use them) do). The same happened in later, similar projects, which is why more complex solutions based on cooperation between competing banks were considered.

After local POS systems related to a single bank had failed due to the lack of frequency, regional, bank-neutral and thus interoperable POS systems emerged. They were established by the regional ATM operators who were then owned by the regional banks, but then developed into dominant POS networks as a result of the gradually changing payment habits.

In Germany, the Sparkassen were the first institutes to venture attempts with POS systems in Berlin and Munich in 1984, but they failed because retailers did not want to share in the costs. The negotiations dragged out the introduction of the system, so that it wasn't until 1990 that the breakthrough came with electronic cash POS systems in Germany.

Further development of the POS terminals

The understanding of what a POS payment system or a POS terminal is has changed with the advancing development of card and terminal technology.

The payment procedure was the same as today:

Clearing and settlement take place in parallel with the authorization (single messaging) or after the end of the day (dual messaging).

This first generation of POS terminals from the debit card world soon had a twin. The credit card authorization telephones that were current at the time were developed into credit card transaction terminals. The processing corresponded - with the exception of the determination of the card holder's authorization - to the POS terminals from the debit card world that were then on the market. Proof that the presenter is also the real cardholder is / was provided with this type of POS terminal by comparing the signature on the card with that which is given on a printed receipt .

In response to this, the POS terminals from the world of debit cards were expanded to include a credit card transaction and thus developed into universal POS terminals that were able to process both PIN-based and signature-based transactions. The second generation of POS terminals was thus on the market.

These third generation POS terminals continue to work with the magnetic strip , but also with the chip (hybrid terminals). Today, many cash withdrawal cards - such as the Maestro card (the former eurocheque card) - have a chip on them. With regard to the EMV specification, which includes payment cards such as Europay , Mastercard and Visa products as well as the terminals provided for them, it can be assumed that in 5 years' time almost all cash withdrawal cards will be equipped with a chip in addition to the magnetic strip (hybrid cards ).

While the first hybrid terminals were equipped with two separate readers - one for the chip and one for the magnetic stripe - hybrid readers are becoming more and more popular for reasons of practicality. They have a slot that the card is inserted into. The card is then read according to the programmed sequence.

With the increasing success of the third-generation POS terminals, certain industries ( e.g. restaurants, traveling dealers, market stalls) criticized the location of the POS system, which is a result of its line connection ( online transaction). In order to remedy this deficiency, mobile POS terminals based on GSM have also been developed, which are being used more and more.

The Dynamic Currency Conversion (DCC) is an extension for a POS terminal with which foreign buyers receive the amount to be paid during the payment process from a third-party provider converted into their home currency. This service often leads to significantly worse exchange rates than those of the issuing bank being used and effectively increasing the costs for the customer.

In the past, software integration in POS solutions was difficult due to the lack of international protocol standards. De facto standards that are now on the market, such as the POS-EPS interface from IFSF or the OPI interface (OPI: Open Payment Initiative ) from Wincor Nixdorf, make integration much easier. In the course of the EPAS project (EPAS: Electronic Protocols Application Software ), protocol standards are also being created at European level that will reduce the variety of different interfaces in the future.

Worldwide spread and uninterrupted growth of the POS terminals

Building on the American experience, the declared aim was to create national debit card POS systems in many European countries (for example in Austria, Germany ( Electronic Cash ), Belgium ( Bancontact ), the Netherlands (PIN)) . They were all a success.

Based on these national European POS systems and regional POS systems on the other continents, these POS systems were networked with mutual card acceptance in the 1980s, which led to the formation of the global debit card system Maestro .

At the same time, the contracting company clearing banks set up or participated in POS systems according to the standardization of credit card acceptance at POS terminals, with which the five credit card organizations with cards that can be used worldwide could use a network of POS systems.

Today the trend is that the installed terminals accept all common types of cards, with different financial arrangements. In the long term, there will be at least one such universal terminal at every point of sale. The boom in POS terminals is likely to continue over the next few years.

In the 2010s, u. a. iZettle , Sumup , Payleven and Lexware pay founded. You have specialized in contactless payment and created digital solutions for smartphones and tablets. With the advent of NFC- enabled payment cards and mobile payment , apps were developed that can process payments regardless of location. In 2019, Worldline and Bitcoin Suisse signed a letter of intent to jointly enable the acceptance of cryptocurrencies at POS terminals.

In the Generali Arena in Vienna, following the renovation carried out between 2016 and 2018, payments can only be made cashless.

Skimming was the term used to describe the fraudulent manipulation within the POS terminals, through the installation of additional parts or through an intermediary reader in the data line. Card data and the secret number (PIN) can thus be discreetly spied out. The devices are often secretly exchanged or installed in the shops concerned and then removed again later. The number of cases of fraud decreased again thanks to anti-skimming modules.