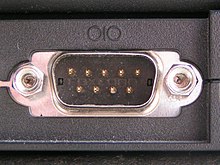 In the closer environment of personal computers , the serial interface usually means an interface according to EIA - RS-232 , usually using a 9-pin D-Sub connector. It is traditionally used there to connect peripheral devices to the PC that get by with comparatively moderate transmission speeds, such as B. keyboards , mice , printers , dial-up devices, etc., but has now largely been replaced by the more universal USB interface. The USB interface also works serially, but is usually not meant colloquially when one speaks of "the serial interface". There are inexpensive adapters between USB and RS-232, so that most PC manufacturers have switched to doing without the RS-232 interface in the basic device.

Serial interfaces in the broader sense are very widespread and exist in very many forms and variants. In addition to point-to-point connections such as RS-232 and RS-422, this also includes network and bus interfaces such as B. Ethernet , CAN bus or RS-485 . Data rates, possible transmission distances and other properties differ e.g. Sometimes considerable, there is a suitable interface definition for almost every area of ​​application. See the list below.

Serial interfaces differ not only in the connector used and the electrical transmission parameters, they also use different methods for transmission control, data flow control and synchronization (see also communication protocol ). You can work in one direction ("simplex") or in both directions ("duplex"), the latter either alternately ("half-duplex") or simultaneously ("full-duplex") (see also duplex (communications engineering) ).

RS-232 was originally developed in the 1960s as an interface for data transmission to terminals, which consisted of a tape reader and punch as well as an input device that was very similar to a teleprinter . Screen terminals did not exist until much later, but continued well into the 1980s, as computers generally had no screen output.

The serial RS-232 interface also served modems that converted messages to be transmitted on telephone lines. This interface for networking terminals (e.g. VT100 ) with host computers, especially those from DEC , achieved great popularity . The RS-232 interface was also used in CAD systems to connect graphic terminals (Tektronix) with fast mainframes.

Since in the 1980s only telephone lines were available for long-distance transmission of data (e.g. with BTX ), the transmission rate of which was limited to 1200 in the receiving direction and to 75 bits per second in the sending direction (upper limit frequency around 3500 Hz ), RS-232 was used tailored accordingly. The adjustable data rates were between 110 and 19200 bits per second. It was only when it was used as a terminal interface that the need for higher data rates grew. Today 19200 bits per second are usually specified. With this moderate transmission speed, the handshake lines can be dispensed with and the XON / XOFF protocol (see data flow control ) can be used, which minimizes the cabling effort between the data transmission device (DÜE) and data receiving device (DEE).

While the original interface definition provided for 25-pin plugs or sockets (because of the many handshake signals), the 9-pin interface was implemented in the 1990s (especially for PCs ). The cables that were necessary for synchronous data transmission were dispensed with, as this type of transmission was not supported by the frequently used UART of the type i82c50 (and its better-known derivatives NS16c550).

There are several standards that specify the types of serial transmission. This includes: