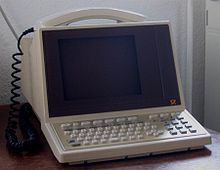 Screen text (short Btx or BTX ; in Switzerland Videotex ) was an interactive online service . He combined the functions of the telephone and the television set into one means of communication.

BTX was introduced in Austria in June 1982 and nationwide in the Federal Republic of Germany from September 1, 1983. Due to the competition of the open Internet , on-screen text later lost its meaning again. The service has since been discontinued in all countries, in Germany in 2007.

There was confusion with television teletext , which also contributed to the fact that the service in Switzerland was called videotex (without a “t” at the end) and was thus similar to the teletext synonym teletext used in Germany. 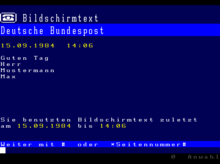 Reconstruction of the BTX welcome page 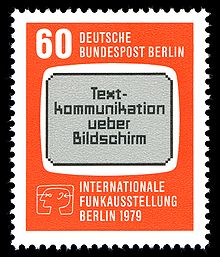 Side of the police

Btx was presented in 1977 by the then post minister Kurt Gscheidle at the international radio exhibition in Berlin. It was developed in Germany under the direction of Eric Danke , who later became a board member of T-Online . Eric Dank became aware of the originally British technology in 1975 through a specialist publication about Samuel Fedida and PRESTEL . In June 1980 a field test with around 2,000 participants each started in Düsseldorf , Neuss and Berlin . On March 18, 1983, the heads of government of the federal states signed the State Treaty on Video Text in Bonn . The contract left every interested party free to act as a provider of screen text in compliance with certain regulations. The Deutsche Bundespost started an interactive online service in 1983 , which initially required a special Btx device. In 1983, in addition to the Btx control center in Ulm, there were Btx switching offices in Düsseldorf, Hamburg, Frankfurt am Main, Munich and Stuttgart. The plan was to expand to 150 Btx exchanges. However, the expected number of users was never achieved. In 1986 it should be around a million, but in fact it was only 60,000. The million was only reached ten years later, after Btx had been coupled with the new T-Online offer including e-mail and Internet access in 1995. In 1993, Btx became part of the newly created Datex-J service . On December 31, 2001, the original Btx service was officially shut down. A reduced variant for online banking was operated until May 10, 2007.

Btx has existed in Austria since June 1982. The in-house development MUPID , a special terminal for using the Btx services, was developed by PTV itself at the time and could be rented by users. The Btx connection costs in March 1984 were around ATS 150 and the monthly basic fee was ATS 70. The service was discontinued at the end of November 2001.

The service was called Videotex in Switzerland (without the t at the end). Started by the then PTT in the 1980s, it was operated by SwissOnline from 1995 . On September 30, 2000, Videotex was discontinued.

The basis for the BTX standard was laid by the British Prestel , which was distributed in an expanded form under the name Prestel Plus in Sweden and, as the world's most successful system, Minitel in France.

In Denmark there was the name Teledata , in Italy Videotel and in the Netherlands Viditel . In Spain the BTX-based system was called Ibertex .

Characteristics of on-screen text in Germany

The following important information is missing from this article or section:
operating systems used
Help Wikipedia by researching and pasting it .

Public Btx terminal, today in the Museum for Communication Frankfurt

The German BTX originally required special hardware that had to be bought or rented from the post office. The data was transmitted via the telephone network with a modem (DBT-03) or acoustic coupler , the display was displayed using a BTX device on the television screen or on a separate BTX terminal, or using special software on computers .

Like the French Minitel , Btx originally used the British PRESTEL standard, then the CEPT standard T / CD 6-1. Later, the downward-compatible KIT standard (Kernel for Intelligent Communication Terminals) was switched to, but it never really caught on. CEPT allowed the transmission of graphic pages with a resolution of 480 × 240 pixels, whereby 32 out of 4,096 colors could be displayed simultaneously and DRCS (Dynamically Redefinable Character Set). This corresponded to the technical possibilities of the early 1980s. Many Btx pages of the PRESTEL standard were similar to the teletext pages that are still used today, with a pseudo graphic made up of colored ASCII characters. In Btx, entire screen pages were initially always transmitted at a speed of 1200 bit / s . A page was requested by the user at 75 bit / s. The possible access speeds have also been increased by the Federal Post Office with advances in modem technology.

Downloading data and computer programs (telesoftware), especially shareware and program updates, was possible with the help of a software decoder and a PC.

The pages were addressed using a number preceded by an asterisk (*) and followed by a hash sign (#) called a " hash " (e.g. * 30000 #). With the end mark #, the system was able to differentiate when entering address numbers whether the input was completed or further digits followed, which meant that a larger (theoretically infinite) number range remained available (counterexample: telephony with telephone number entry without end mark). Entries without a preceding asterisk were interpreted as commands that lead to another page (e.g. "23") or confirm a paid page view (always "19" to avoid accidental confirmation). The combination * # led back to the previous page.

DBT-03 and other modems

The DBT-03 modem allowed a data transfer rate of 1,200 bit / s to the subscriber and 75 bit / s from the subscriber to the control center ( ITU-T V.23 standard ). Access authentication was carried out using the twelve-digit connection identifier (which was permanently programmed into the ROM of a DBT-03 as hardware identifier), the subscriber number, the additional user and a password that the user could define himself. The connection identifier was permanently programmed in the DBT-03 modems and opening was prohibited. The modems were sealed, opening could only be done by breaking this seal. An original device had a yellow one, after a repair it got a blue seal and a new ROM with a different hardware code. The dial-in number was hardwired to phone number 190.

Difference to the Internet

In the German Btx system, the providers' pages were stored in the original database on a central computer system from the manufacturer IBM in the Btx control center in Ulm and were called up from there if the local screen text exchange (Vst) did not have them in their database or Participant computers had in stock. The local nodes were able to service 95 to 98 percent of the page requests. The page file in the local node has undergone an aging process. Seldom requested pages were overwritten with frequently requested pages.

The pages of so-called "external computers" were an exception. They did not exist statically in the database of the BTX control center, but were generated dynamically by the provider's computer and transmitted to the user via the BTX control center. The external computers were connected to the Btx-Vstn in a worldwide network via X.25 ( Datex-P ). This option was only used by a few large providers (e.g. Quelle or Neckermann Reisen ), but as a forerunner of online banking, it was used by numerous banks.

The first digit of a page number was the "area code": 2–6 for nationwide, 8 and 9 for regional pages. There was a charge to call up regional pages in another region. Thanks to the central administration and storage of the content and the access for “external computers”, an alphabetically sorted “provider directory” was possible (accessible via * 12 #).

Each participant could set up their own "co-users" with their own individual passwords under their Btx number. A co-user was clearly identifiable and addressable as the sender through the "co-user addition" on messages. The participant himself had the (generally not to be entered) co-user suffix 0001, the co-users then 0002, 0003 ... The participant could set up and top up a "pocket money account" for each co-user, with which a sum of money was available for Btx costs.

The costs for the user resulted from the retrieval of a page; the provider had largely a free hand in setting tariffs. In addition to free retrieval, he could choose to charge a page-based fee ( DM 0.01 to DM 9.99) or a time-based fee (DM 0.01 to DM 1.30 per minute). The costs were billed to the users' telephone bill.

Btx already offered numerous services that are available on the internet today. Btx participants were able to discuss with each other online ( chat ), send each other electronic messages in the form of Btx pages at a price of 30 pfennigs per page and call up current news (ticker, homepages). There was also the possibility for providers to design their offer dynamically using a so-called "external computer". A connection was established via Datex-P to the provider's computer via a "transfer page" from the normal page inventory from the respective Btx exchange . From then on, this computer took over control of the page content displayed on the end device. This offer was mainly used by banks (as a forerunner of today's online banking), mail order companies and the travel industry ( Lufthansa , Deutsche Bundesbahn or Deutsche Bahn ). Btx customers could do their banking transactions interactively or place online orders in the mail order business. Federal authorities such as the employment office could also be reached via Btx.

The Chaos Computer Club (CCC) was also represented with an offer in Btx. The club found a number of technical weaknesses in Btx and tried to show the limits of the system, including through the Btx hack reported on nationwide television .

Btx was denied great success, which was mainly due to the restrictive policy, high usage fees (1983: DM 8.00 monthly basic fee and a connection fee of DM 55.00) and a fixed contract with the Bundespost. For the use of Btx, this only permitted special hardware approved by the Post, which had to be purchased separately at high prices. Although CEPT decoders were available early for home computers such as the C64, which were popular at the time , the post office refused to approve these devices. In France, where the necessary hardware from France Télécom z. While it was partly provided free of charge, the local Minitel enjoyed great popularity.

The postal monopoly on these terminals , modems and telephones fell with the liberalization of the terminal market on July 1, 1989. At that time, private mailbox networks such as FidoNet or MausNet , which were able to offer some of the services available via Btx to private individuals, were much more affordable . For a long time there was no alternative to Btx in the area of electronic banking .

In 1993, Btx became part of the newly created Datex-J service in order to separate the network infrastructure from the information service. Datex-J with Btx was redesigned and taken over by T-Online .

The subsidiary T-Online International AG operated the system until May 2007, albeit under the name “T-Online Classic” and with strong encryption, using an encryption library, Transport / S, certified according to ITSEC “E4 / high”. This also made it possible to access the "T-Online Classic Client" via the Internet worldwide under the URL "classicgate.t-online.de" under port 866. Alternatively, some banks also operated the CAT system (CEPT Access Tool). A separate CAT server emulated the previous access to T-Online.