The Deutsche Bundesbahn ( DB ) was the state railway of the Federal Republic of Germany . She went from the West German parts of the Deutsche Reichsbahn produced and existed until the end of 1993. Although as without legal capacity Federal special fund was declared, she could sue or be sued themselves.

On January 1, 1994, the Deutsche Bundesbahn was merged with the East German Deutsche Reichsbahn to form the corporation Deutsche Bahn AG , which is organized under commercial law and has since been solely owned by the German state.

→ Main article : History of the railways in Germany 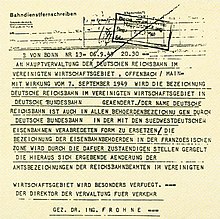 Rail service telex to rename the DR to DB 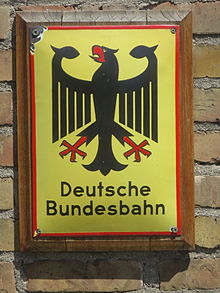 After the end of the Second World War , the occupying powers took over the operation of the parts of the Deutsche Reichsbahn that remained in the occupation zones .

The Reichsbahndirektion (RBD) Augsburg , Frankfurt am Main , Kassel , Munich , Regensburg and Stuttgart (for the railways in Württemberg-Baden ) that are located in the American occupation zone are grouped under the designation of the United States Zone in Frankfurt am Main . For the British zone of occupation , under General Director Max Leibbrand in Bielefeld, the Reichsbahn General Directorate was established for the areas of the Essen , Hamburg , Hanover , Cologne , Münster (Westphalia) and Wuppertal directorates . With the formation of the United Economic Area, the Bizone , in 1946 the main administration of the railways of the American and British occupation areas arose , which moved its headquarters to Offenbach am Main in 1947 and was renamed “Deutsche Reichsbahn in the United Economic Area”. After the establishment of the Federal Republic of Germany on May 24, 1949, the name was changed to "Deutsche Bundesbahn" with effect from September 7, 1949.

The railways of the French occupation zone were grouped together in the operating association of the Southwest German Railways (SWDE), based in Speyer . The SWDE comprised the Reichsbahndirectors Karlsruhe (located in the US zone), Mainz and Saarbrücken. After the Saarland (see Saarland 1947 to 1956 ) was separated from the French zone in 1947 and received its own state railway - the Saarland Railways (EdS) - the network of the Saarbrücken Reich Railway Directorate outside the Saarland was transferred to the new RBD Trier . With the passage of the Federal Railroad Act on July 1, 1952, this organizational structure was legitimized and thus became the unified state railroad of the Federal Republic of Germany .

According to the Treaty of Luxembourg , when the Saarland was incorporated into the Federal Republic of Germany on January 1, 1957, the EdS also became part of the Deutsche Bundesbahn.

Shortly after the establishment of the Federal Railroad, but exacerbated from the 1960s, the problem emerged that politicians expected the Federal Railroad as a state-owned company to provide loss-making services that a purely commercial private company would never provide on its own. Examples include the operation of remote branch lines with little and further declining traffic or social benefits for former employees, but also maintaining workshops in regions as a structural policy measure. DB's annual losses rose steadily. This conflict of objectives between the economic and business management approach became very clear when the DB board of directors published plans for its so-called business management network in 1976 . Although these led to lively debates, the German rail reform (1994) did not have any fundamental consequences until 18 years later.

As early as 1991, the federal government took over long-term debts of the Federal Railroad in the amount of 6.4 billion euros.

Characteristic for the DB was the increasingly fierce competition with road traffic for shares in the transport market due to mass motorization . To avoid the cost pressure, put the state railway to be unprofitable-assessed branch lines on a large scale silent .

The following transport services were registered:

On the other hand, there were also attempts to make operation on branch lines more attractive again in order to be able to prevent further line closures. One example of this was the introduction of the City Railway (CB).

It is only since the 1990s that some of the newly founded transport associations have been trying to reactivate railways in rural regions. Complementary new buildings , on the other hand, were built on a comparatively small scale with the exception of a few long-distance, high-speed and S-Bahn routes.

Occasional route changes were made on branch lines. Examples of this are the relocation of the Biggetalbahn and the Innerstetalbahn due to the construction of dams . The German Sleeping Car and Dining Car Company (DSG) was founded to manage the dining and sleeping cars as well as the catering . 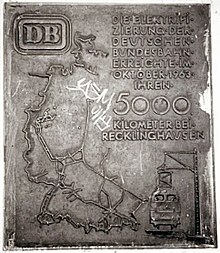 State of the electrification of the Deutsche Bundesbahn in October 1963

There was a structural change in the types of traction , at the end of which the steam locomotives were no longer needed and were replaced by modern electric and diesel locomotives (the last steam locomotive was shut down in December 1977). At the same time, almost all the main lines were electrified . For passengers in passenger transport, the structural change resulted in the introduction of new types of train such as the InterCity (IC) and the Trans Europ Express (TEE). The concept and development of the rail vehicles for the InterCityExpress (ICE) also go back to plans by DB.

In freight transport, the shipment of general cargo was completely discontinued after the competition against the freight forwarding industry could no longer be maintained. As a result of this development, a large number of marshalling yards were shut down. During the same period, the transport of bulk goods such as coal and iron ore also declined.

Due to the poor competitiveness - high costs, long reloading times of the freight wagons on trestles or trolleys , etc. - with the exception of the Wangeroog Island Railway, all of the federal railway's own narrow-gauge railways were shut down one after another.

On October 25, 1993, DB moved into a newly constructed building complex with 1,059 offices in Frankfurt am Main . It then served as the headquarters of Deutsche Bahn until 2000 and then as the seat of the Board of Management's Passenger Transport department .

DB had its own trucks for the transport of goods, in particular for the delivery of goods away from its track systems . In addition, numerous hauliers also drove in the piece area for the company. In the 1960s and 1970s, DB was one of the largest truck owners in Germany. In addition to conventional trucks, there were also various special vehicles in the fleet .

The DB had often opened up rural areas, sometimes also as a replacement for uneconomical rail lines, with rail buses and linked them to larger train stations. Like most diesel locomotives in rail transport, the rail buses were painted red. This branch of business had already emerged during the time of the DR .

The DB operated in cooperation with the ÖBB and the SBB passenger services on Lake Constance and from 1951 together with the DSB the railway ferry Großenbrode-Gedser between the train station Großenbrode Kai and Gedser , which was later replaced by the Vogelfluglinie . There was also an island ferry service to the island of Wangerooge . The DB had its own ships for this.

The Federal Railroad was divided into four levels:

The general agencies were on an equal footing with the sales force.

The railway police were affiliated with the Federal Railroad .

A separate telephone network was used for communication with the rail connection system (BASA).

During the railway reform, both German state railways and the West Berlin administration of the former Reichsbahn assets were incorporated into the federal railway assets on January 1, 1994 . The entrepreneurial part of providing rail transport services and operating the rail infrastructure was outsourced to the Deutsche Bahn Aktiengesellschaft founded for this purpose on January 5, 1994. The sovereign tasks were transferred to the Federal Railway Authority on the same day .

First President of the Deutsche Bundesbahn