List of locomotive and multiple unit series of the Deutsche Bundesbahn

The steam locomotive - series are after the series scheme of the Deutsche Reichsbahn ordered that electric , diesel and small locomotive -Baureihen and railcars - and a railroad maintenance vehicle -Baureihen are after the series scheme of the DB ordered. Series that were completely withdrawn before 1968 are classified under their names according to the numbering scheme continued by the Deutsche Bundesbahn until the end of 1967. A new designation system had been introduced for combustion railcars in the late 1940s, but this was only valid in the western zones , i.e. the area of ​​the later DB. 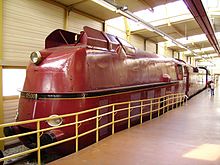 In the first column of the table, the series number of the vehicles concerned, which was used according to the Reichsbahn scheme continued by the Deutsche Bundesbahn ; If necessary, digits of the serial number are included if they are necessary to identify sub-series.

The electric vehicles German Federal Railroad were to operate with a contact wire voltage of 15 kilovolts, 16 2 / 3 designed Hertz.