The V 200.1 series is a further development of the V 200.0 series , for which Krauss-Maffei received the order in 1960. The main difference between the V 200.1 and the V 200.0 series is the more powerful drive motors of 2 × 1350 HP compared to the 2 × 1100 HP of the V 200.0. These became necessary because the increased volume of traffic had made the trains longer and heavier. As a result, the class V 200.0 locomotives reached their performance limits, which often led to delays. The higher weight of the new engines was partly offset by the use of lightweight materials and the use of a lighter boiler for steam heating .

In 1960 the first series of eight locomotives was ordered for the Allgäu Railway , and in 1961 it was increased by twelve more locomotives for the Vogelfluglinie . The first locomotive was handed over to the DB on November 27, 1962. Due to positive operating experience, another 30 locomotives were ordered as early as 1963. The total price per locomotive was 1.27 million Deutschmarks. The V 200 121 was delivered on December 7, 1963. The V 200 150 was the last locomotive to be accepted on September 28, 1965.

The locomotives of the V 200.1 series were used in particular in fast and heavy passenger train service on the Allgäu Railway between Kempten (Allgäu) and Lindau and the Black Forest Railway between Offenburg and Konstanz . The class V 200.1 was also on the Vogelfluglinie next to the newly built Fehmarnsund Bridge and the modern ferry boats for fast travel between Germany and Denmark . Until the electrification in 1967, however, they were also used in front of long-distance express trains on the route between Hamburg and Osnabrück.

In 1975 the Kempten depot locomotives were relocated to Villingen, as the locomotives could no longer be used in international passenger traffic due to the lack of an electrical train heating system.

The last place where the DB machines, which have since been re-designated as the 221 series, were in the Ruhr area , where heavy freight trains were pulled on main and secondary lines. There was great demand there due to the shutdown of the last steam locomotives. The locomotives were initially stationed here in the Gelsenkirchen-Bismarck depot , after which the Oberhausen-Osterfeld depot was the last home of the 221 series until 1988. The locomotives were mainly used in program traffic without a regular schedule in the entire Ruhr area in front of various freight train services, including on the narrow Angertal Railway in heavy lime transport.

The lightweight construction method led to increasing corrosion damage at the beginning of the 1980s. The high maintenance costs of the twin-engine locomotives and the declining freight traffic in the Ruhr area resulted in the rapid retirement by the end of May 1987.

The Greek OSE acquired 20 locomotives and had them technically and visually refurbished in Germany. All locomotives were given a new ocean blue and beige paint job analogous to the DB scheme. The locomotives were classified as the A410 series and were intended as an interim solution in passenger transport, but were also used in freight transport. After being taken out of service at the end of the 1990s, 20 locomotives were acquired from German private railways.

The Albanian state railway HSH acquired five 221s and used them on their network, designated 2001 to 2005. The last existing locomotive was still parked in Prenjas in 2013, the other locomotives were scrapped in 2004.

While the basic design concept as a twin-engine locomotive with gears under the end driver's cabs and bogies with internally mounted wheel sets was adopted from the V 200.0, the interior of the locomotive, especially in the electrical part, is more similar to the V 100 than the V 200.0. In contrast to the V 200.0, the travel speed is no longer set with a hand crank, but with a handwheel in 15 steps. The electrical part comes from Siemens-Schuckert .

They were not equipped with engines and gearboxes from various manufacturers, and the locomotives were supplied with 1,350 HP engines from Daimler-Benz (type MB 12 V 652 TZ) and Maybach Mekydro K184U gearboxes . The TZ engine had no piston crown cooling and proved to be insufficiently stable for heavy duty in the V 200.1. As part of engine exchange campaigns, the 12 V 652 was therefore later installed in the TA version (with piston cooling), while still functional TZ units were used more gently in the V 100 and in particular the V 90 .

The gearbox K184U is a further developed version of the clutch release converter gearbox K104U, which was used in numerous V 200.0s, which is tailored to the higher gear input power. Due to the greater overall length of the gearbox, the roof opening of the driver's cabs had to be lengthened by 315 mm each, as the gearbox had to be crane-lifted to replace it through the roof. In order to be able to continue to use the wooden molds still available at Krauss-Maffei for the strikingly curved driver's cab sections of the V 200, the driver's cab panels were installed with the same length of the locomotive frame, erecting them more steeply to the outside, thus gaining the necessary space for the gears in the roof area.

Although the bogies are essentially the same as the V 200.0, they are not interchangeable with it. In particular, the wheelset shaft and hub were reinforced, which also necessitated changes to the wheelset transmission. When the locomotives were already being used mainly in the Ruhr area and Emsland, the Maybach final drives were replaced with axle drives from Gmeinder due to the higher loads. As with the V 200.0, the bogie guidance was provided ex works with rigid steering levers. They ensured the controlled turning around an only ideal point in the center of the bogie. This steering lever system did not get along with the new wear profiles of the wheel tires introduced at the end of the 1960s and led to the locomotive body swinging up to the side on long straights . As an immediate measure, speed limits of 120 km / h were imposed by various railway departments, and a transverse decoupling of the locomotive body was tested with the locomotives 221 106 and 220 052. This consisted of a conversion package, which consisted of a further modified wheel tire profile, shock-absorbing control arms and the replacement of the coil springs between the locomotive body and the bogie with metal-rubber springs.

The cooling system, which was completely changed compared to the V 200.0, made it possible to relocate the air compressors to the center of the machine room and thus create a walk-through corridor on both sides of the machine room. In the case of the V 200.0, the braking power of the locomotive driving alone was often criticized as being too low, so the compressed air brake was strengthened in the V 200.1. Wheel flange lubrication was available for use on winding roads.

In the second series from V 200 121 there were some improvements. The locomotives now had a closed cooling water circuit and a silencer. While the first series only had an anti-skid device with an optical and acoustic display, the second series could have a direct effect on the power control of the motor. The Sifa was path-dependent in the second series and with time monitoring. 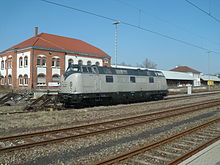 A total of 16 machines from the V 200.1 series have survived. They are partly used as museum machines, partly as mainline locomotives, mainly in freight and construction train service.

The no longer operational V 200 116 of the former Steam Locomotive Tradition Oberhausen Association (DTO eV) could be seen on many special trips on behalf of the Nuremberg Transport Museum of the Deutsche Bahn AG Foundation. A commissioned repair of the gearbox and wheel sets could not be completed due to the bankruptcy of the DTO eV association. The locomotive is currently dismantled into individual components in the Neustrelitz repair shop, a continuation of the repairs is questionable due to the lack of liquid funds of the VM Nürnberg.

All 20 locomotives sold to Greece were brought back to Germany in 2002 by Prignitzer Eisenbahn GmbH . Some of the partly heavily worn machines were overhauled step by step and sold to various private railway companies. In detail these were:

All other V 200.1s were scrapped in 2012 after they were cannibalized and some spare parts were stored. Only 221 112 is still available in Neustrelitz.

In October 2003 the V 200 101 and V 200 120 came back from Italy; they are currently parked in the South German Railway Museum in Heilbronn , where work has started on one of them.