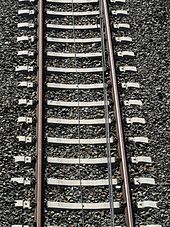 As a standard gauge , control track or full track at refers railways a gauge with a nominal dimension of 1,435 mm (4 "8.5") between the inner edges of the rail heads. In the early days of rail traffic, this gauge was also known as the Stephenson gauge .

Smaller gauges are generally referred to as narrow gauge , larger ones as broad gauge .

The standard gauge is the standard gauge in Europe , North Africa and the Middle East as well as in North America and the People's Republic of China . This gauge is also found in Australia , on Japanese high-speed lines , in the northeast of Argentina (Ferrocarril General Urquiza), in Uruguay , Paraguay and Peru .

When the construction of the world's first public railroad from Stockton to Darlington began in 1822 , its tracks were laid out with the gauge of 1435 mm (4 feet 8½ inches ), which was subsequently adopted as the standard gauge by many countries.

The origin of this dimension is stated:
The origin of the standard gauge of 4 feet and 8½ inches = 1435 mm is not entirely clear ( Haarmann , Das Eisenbahngleis). The first run with a similar gauge was the Plymouth Iron Works in Merthyr Tydfil owned, opened in 1800 Merthyr-Tydfil-Aberdeen-Junction line. The cast-iron angle rails used here , whose vertical, upward-facing legs that were to be positioned towards the center of the track served as the edge of the track, had a clear dimension of 1294 and an external dimension of 1524 mm, and were therefore suitable for the English road carts of that time, whose wheels were 4 feet and 6 inches = 1372 mm clearance. If one gives such wheels, leaving the clearance between them, with wheel flanges of 1 inch thickness and a play of ¼ inch on each side, the result is a track width of 4 feet and 8½ inches. George Stephenson executed the Stockton and Darlington Railway , which opened in 1825, with this gauge.

Another interpretation says:
When the construction of the world's first public railroad began in 1822 from Stockton to Darlington , its tracks were laid out with the track gauge of 1422 mm (4 feet 8 inches). This dimension arose from the fact that it was already very common on the "Tramroad" rail routes of the coal mines in the English county of Durham , and so the tracks of the new railway could also be used by the existing wagons. On the railway from Liverpool to Manchester , which opened in 1830, George Stephenson provided an additional ½ inch gauge to improve the running properties, i.e. today's standard gauge of 1435 mm (4 feet 8½ inches). In this way, Stephenson increased the track clearance without having to change the track dimensions on the vehicles. The railroad from Stockton to Darlington was later converted to this gauge.

It should be noted that George Stephenson was from 1812 machine master ("enginewright") at the Killingworth coal mine in County Durham , whose mine railway tracks had the same 4 foot and 8 inch gauge.

In 2013, during archaeological work on the River Tyne in England, a "Tramroad" with preserved wooden rails was excavated, which also had a track width of 4 feet 8.5 inches (1435 mm) and had been in operation as early as the early 19th century. This line is now considered to be the oldest documented standard-gauge railway line.

In 1846, the UK's 1435mm gauge (in feet and inches) was made the standard gauge by law. Along with the technology of the locomotive railway, the gauge was exported from Great Britain to many parts of the world.

In the USA, the standard gauge was specified as the gauge for the first transcontinental railroad in the “Pacific Railroad Act” of 1863. In 1886, the railway lines of the southern states, where 1524 mm wide gauge was predominant until then , were converted to approximately standard gauge, i.e. 4 feet 9 inches (1448 mm), in one of the largest re-gauging operations in railway history. The reason for the deviation was that the Pennsylvania Railroad as the largest and most important railway company had previously committed to this gauge. Only in the following decade was the gauge gradually reduced by the last half inch on all routes, so that the standard gauge was also predominant in the southern states.

In 1886, representatives from Germany, France, Switzerland, Italy, Austria and Hungary worked out the technical unit in the railway sector in Bern . The already prevailing track width of 1435 mm as well as track widths, tolerances and many other details for international traffic were determined. Today around 60% of all railway lines worldwide are standard gauge. No longer, heavier or faster trains run on any other gauge.

A popular modern legend sees the reason for this uneven gauge in the allegedly two horse backs lane width of the roads of the Roman Empire , which reached as far as England . Essentially, the origin of the gauge of English mine tracks is traced back to the width of Roman roads.

In fact, the Roman roads were of different widths, although there was a guideline, the latitudo legitima , for 8 Roman feet, corresponding to 2.4 meters. This cannot be reconciled with the 1,422 millimeters of the mine tracks. However, the track width of carriages and carts was already 1.5 meters in Roman times, with deviations in the decimeter range. At no time was there a uniform width because, unlike with rails, there was no need for it. The modern legend also often reports of "Roman chariots ", which are not documented for the Roman military. As a result, the Roman roads were not designed for chariots.