The Liverpool and Manchester Railway ( L&MR ) was a railway company in Great Britain . They built a railway line between Liverpool and Manchester , which became the reference model for the subsequent development of railways worldwide. For the first time, all trains ran on it according to a fixed timetable , pulled exclusively by steam locomotives , and it was also the first line with continuous double-track operation - one track for each direction of travel - and intended for public transport from the start .

The line is still in operation today, but is of secondary importance because of a parallel line that was built later.

The tunnel under Liverpool 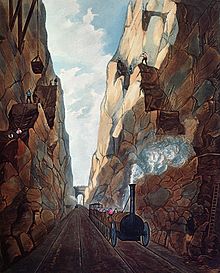 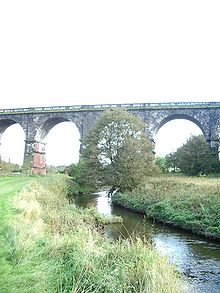 Viaduct over the Sankey Brook

The L&MR should enable the cost-effective transport of raw materials and finished products between the port of Liverpool and the leading industrial metropolis of Manchester . The existing Narrowboat - channels , the Mersey and Irwell Navigation and the Bridgewater Canal , had been built in the 18th century for a much lower volume of transport. Although they enabled Manchester to become a leading center of industry, they were soon no longer able to cope with this development in the 19th century. At the beginning of the 19th century their capacity was exhausted. Furthermore, there were often interruptions in traffic for weeks in the event of drought. Both of these worsened the relationship between capacity demand and supply on the canals and were reflected in constantly rising transport fees and high profits for the owners, a few representatives of the nobility . The bourgeois representatives of trade and industry were therefore positive about a railway connection. On the other hand, nobility and landowners along the planned route vehemently rejected a railway in some cases.

At the beginning of the considerations for a railway line between Liverpool and Manchester, there was neither experience with such a long railway line, nor with locomotives of sufficient efficiency or suitable railway tracks with sufficient durability. The older Stockton and Darlington Railway initially ran both locomotive-hauled and horse-drawn trains, and inclines were overcome by stationary steam engines pulling the trains on ropes through the incline. In addition, there were only relatively short railway lines - some of which were already operated by steam locomotives - which belonged to mines, carried hard coal from there to the canals and were not used for public transport. Initial plans for the Liverpool – Manchester railway line also included doing without locomotives altogether and operating the line with the help of 21 stationary steam engines.

The area between Liverpool and Manchester that had to be crossed was not without problems. It had some inclines. Initially it was not yet certain whether and to what extent a steam locomotive with a train attached could negotiate a slope. Another problem was the large Chat Moss moor that had to be crossed. Whether a railway line could be safely established there was initially highly controversial.

Joseph Sandars, a wealthy grain merchant from Liverpool, and John Kennedy, owner of the largest spinning mill in Manchester, took on the project. They were influenced by the writings of William James, a land surveyor who had gotten rich speculating on land. James had followed the development of mining railways and locomotive technology in the north of England and proposed a rail network that would connect all parts of the country.

William James and later Robert Stephenson undertook measurements from 1822 to determine the most favorable route for the railroad. Due to the resistance of the landowners, they were sometimes only able to do this at night by torchlight or in violation of the ban on entering private land. There were violent arguments. As a result, the work had shortcomings. Robert Stephenson started his own steam engine manufacturing business in 1823 and then went on a business trip to South America to promote his products. James had to file for bankruptcy.

In 1824 a first prospectus for the railway was published by interested parties, with which the project should be advertised and the idea spread. The company also appointed George Stephenson as a new engineer in 1824 . George Stephenson entrusted an employee to check the measurements because of overwork. He was self-taught and spoke a difficult northern English dialect. When parliament discussed the draft bill for the construction of the line from 1824, it turned out that when he was supposed to represent railway construction in the parliamentary committee, he was no match for the legally trained and rhetorically superior MPs . This gave the impression that the calculations on which the bill was based were imprecise. Resistance in parliament was considerable. The majority of the MEPs simply could not imagine that a railway of this size could work. The draft law was put on the agenda of the parliamentary committee 38 times within 10 weeks and then threatened to fail in plenary , whereupon the MPs who had introduced the draft withdrew.

In place of Stephenson, whose reputation had suffered from this parliamentary defeat, the company now appointed George and John Rennie as new engineers. They hired Charles Vignoles as a surveyor. This then also represented the amended plans before the committee when the second draft law was introduced in parliament. This received the approval of parliament and was signed by King George IV on May 5th, 1826 . The approved route largely avoided the properties of the opponents of the first project.

Some of the competing ship channel owners have been pacified by the railroad's allowing them to join the railroad project as shareholders. As the Rennies made unacceptable demands and the parliamentary hurdle was cleared, George Stephenson was again appointed engineer in charge, along with his assistant Joseph Locke . George Stephenson had fallen out with Vignoles and in 1827 enforced his dismissal.

Technical drawing of the superstructure of the L&MR - in reality it was embedded in gravel up to the lower edge of the rails.

The route was 56.327 km long and was an impressive engineering achievement for the time. It started at the port of Liverpool. The first station, Liverpool Crown Street , was replaced by Liverpool Lime Street station in 1836 when its capacity was no longer sufficient and a corresponding tunnel was completed . From here, after a few meters, the route led into the 2057 m long Wapping Tunnel under the city center of Liverpool to Edge Hill . The tunnel was followed by a 3.219 km long and up to 21 m deep cut through the rocky hill Olive Mount ( Olive Mount Cutting ). The subsequent uphill and downhill gradients managed without such engineering structures . However, numerous bridges and culverts were required. The largest bridge was the Sankey Viaduct over the Sankey Brook , 21 m high with nine arches of 15.24 m each. However, the biggest obstacle placed the 7.644 kilometers long crossing of Chat Moss . Since it was not possible to drain the swamp, was only an extensive drainage widely braids of wood and heather sunk in the bog and then a dam built. A total of 63 bridges and viaducts were built. A special feature was the bridge over Water Street in Manchester. William Fairbairn and Eaton Hodgkinson built them from cast iron beams so that the vehicles running underneath had enough space.

Rolled iron rails were installed - a further development compared to the previously commonly used cast iron rails. The line was built with two tracks throughout. From the start, those responsible assumed that the volume of traffic justified two tracks.

In order to find suitable locomotives for the route, the L&MR wrote a competition in 1829 at the urging of George Stephenson. It was described which performance was expected from a locomotive. The company praised for a prize of £ 500 for a corresponding machine. The then developed locomotives were tested in the legendary race of Rainhill ( English : The Rainhill Trials ) from October 6, 1829. However, they did not drive against each other at the same time, but were tested individually one after the other. The winner was Robert Stephenson's locomotive The Rocket .

“Perhaps the most striking result produced by the completion of this railway, is the sudden change which has been effected in our ideas of time and space. What was quick is now slow; what was distant is now near. "

“Perhaps the most remarkable result that the completion of this railway line has produced is the abrupt change in our conception of space and time. What was fast is now slow, and what was distant is now close. " 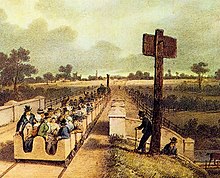 Opening trip of the L&MR

The route was opened on September 15, 1830. The then Prime Minister , the Duke of Wellington , had traveled especially for this purpose . 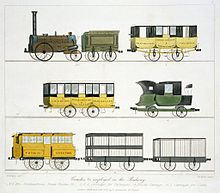 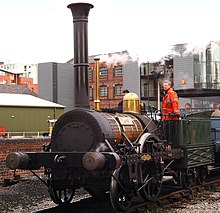 Replica of the planet

Regardless of the tragic event, expectations in passenger transport were far exceeded. Traveling by train was cheaper, faster and more comfortable than by road. A few weeks after the opening, the first excursion trains and mail trains started running alongside the scheduled six pairs of trains every working day. According to the schedule, four pairs of trains with 1st class cars and two with 2nd class cars ran on weekdays. From the summer of 1831 tens of thousands were promoted to the horse races in Newton. Although the underlying law, based on the model for public roads, still allowed private vehicles to use the route against tolls , the company decided right from the start to operate the trains exclusively itself.

In most cases, the longer transport time on the canals was initially accepted in freight transport. In fact, a freight train did not run until December 4, 1830, pulled by the Planet locomotive . The train carried 165 bales of American cotton , 63 sacks of oatmeal , 200 barrels of flour and 34 sacks of malt , a total of 75 tons . The transport of goods by rail also proved to be a successful model. The canal companies then drastically reduced their freight tariffs due to competition from the railways.

Because of the steep gradient between Edge Hill and Liverpool Crown Street , trains coming from Manchester initially all stopped in Edge Hill, where the locomotives were uncoupled. The trains then rolled down to Liverpool station, monitored by brakes. In the opposite direction, the wagons were pulled up on a rope by a stationary steam engine.

The L&MR was the first railway to introduce signals that were given with flags : white for “stop”, red for “caution” and purple for “free travel”. Other railways in Great Britain and the US followed suit in the early 1840s. The color combination of red-yellow-green that is common today later prevailed.

Since the L&MR was the very first railway for public transport, experience first had to be gained during operation. There were only a few accidents, almost always caused by the carelessness of passengers or people on the track. The people first had to learn how to use the new technology and its dangers.

On July 30, 1842, work began on extending the route from Ordsall Road to the new Manchester Victoria station . After opening on May 4, 1844, the original station on Liverpool Street was closed.