Self-study is a link to this article. See also: Self-Study University of Hunan . 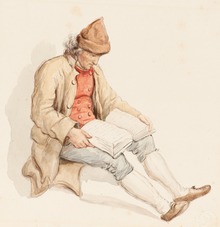 An autodidact ( ancient Greek αὐτός autos 'self' and διδάσκειν didaskein 'teach') is a person who independently acquires knowledge or skills or who has acquired them independently through observation, experimentation, practice or reading.

A directed autodidactic learning process is also referred to as self-study , in contrast to formalized study at a university.

Autodidacts can acquire all of their education, including technical skills, on their own. B. the philosopher and writer Jean-Jacques Rousseau , the Porsche founder Ferdinand Porsche and the US President Abraham Lincoln , or just in a different area than what they learned, such as. As the voice - and fairy tale researcher Jacob and Wilhelm Grimm , the lawyers were, or Joseph Mallord William Turner , of his knowledge appropriated in the art painting at 14 years itself.

The term autodidact is attributed to the German philosopher Gottfried Wilhelm Leibniz , who, as a doctor of law, worked as a librarian in the Herzog August Library in Wolfenbüttel and described himself in one of his works “firstly, that I was almost entirely autodidact”. Leibniz is often referred to as the last polymath to acquire most of his extensive knowledge autodidactically.

In the course of the 19th century, compulsory schooling became generally accepted. There were fewer people who were forced to become self-taught if they wanted to educate themselves. Inquisitive but destitute people and women, who at the time were largely denied access to high school and university, sometimes found recognition in specialist circles as serious autodidacts. One example is the Englishwoman Mary Anning , extending from a poor, uneducated fossil collector to one of the most Paläontologinnen developed the 19th century.

Autodidacts sometimes achieve remarkable to outstanding achievements, today especially in the field of art and foreign languages. A particularly unusual autodidact was the Afro-American draftsman Bill Traylor , a former slave who started drawing at the age of 80 and became world famous.

In professional fields where visiting a specialist institute is neither the rule nor mandatory, such as B. chess players, athletes, artists such as pop musicians, rock guitarists, painters, journalists, actors or authors of fictional literature (pure entertainment literature), one does not speak of self-taught. Even academics who drop out of their studies and still become successful in their field as a result of their own further training are not, strictly speaking, self-taught, nor are people who have been trained by private teachers.

People who achieve economic success with limited means or out of nowhere and on their own (whereby education does not play a role), on the other hand, are called climbers or self-made men .

Self-taught as a theme in the feature film

The Prisoner of Alcatraz (1962), directed by John Frankenheimer : A lifelong inmate, Robert Stroud, who isallowed to keep songbirds in solitary confinement, matures through observation, reading and years of experimentation to become a world-renowned ornithologist and specialist book author.

Autodidacts are sometimes said to have resentment towards academically educated people and that they tend to show off their knowledge to academics.