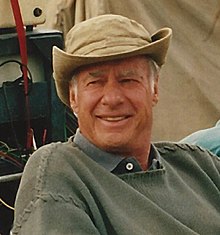 Frankenheimer was born the son of a Jew from Germany and a Catholic from Ireland and was raised in the Catholic faith. After finishing school, Frankenheimer joined the US Air Force , where he made documentaries and educational films , among other things , and thus got to know the technical side of filmmaking while reading books on film history and film theory .

After finishing his service, he moved to New York City , where he found a job as an assistant director for the television station CBS . When Sidney Lumet left the television series You Are There produced there as a director in 1953 , Frankenheimer took over his position and from then on also directed other series and television films.

In 1957 he turned to the cinema for the first time with the drama The naked face . The film about a teenager (played by James MacArthur ) feeling alienated from his parents and society was quite successful, but Frankenheimer pulled back to television.

It took until 1961 for him to direct a new feature film - with the crime film Die Junge Wilden , Frankenheimer began a very successful collaboration with Burt Lancaster , who starred in several of his subsequent films (in The Prisoner of Alcatraz (1962) , Seven Days in May (1962) and The Train (1964)).

With the prison drama The Prisoner of Alcatraz (English. Birdman of Alcatraz ) with Burt Lancaster, Karl Malden and Telly Savalas began Frankenheimer's rise; the film earned him a nomination for the Golden Lion for best director. In the same year his film, released The Manchurian Candidate ( The Manchurian Candidate ) with Frank Sinatra , Laurence Harvey , Angela Lansbury and Janet Leigh in the lead roles. The time of the Cold War gambling thriller about a group of soldiers who brainwashed puppets of the Soviet Union , are quickly became a cult film . According to the scriptwriter George Axelrod , the film developed from a flop to a cult classic without having been a success beforehand (original quote: "It went from failure to cult classic without even being a success").

Frankenheimer also took up the topic of paranoia from ambassadors of fear in his next film - Seven Days in May ( Seven Days in May , with Lancaster, Kirk Douglas and Ava Gardner ) is about the possibility of a coup in the USA by an ultra-conservative general who rejects the US President's disarmament policy. With this film, Frankenheimer intensified his criticism of the conservative forces in the USA and the incipient struggle against communism under Senator Joseph McCarthy . However, three weeks before the film started, Stanley Kubrick's thematically related comedy Dr. Strange or: How I learned to love the bomb , from whose shadow Frankenheimer's thriller could not emerge.

In 1964 he took over the direction of the complex action - thriller The train ( The Train , starring Burt Lancaster, Paul Scofield and Jeanne Moreau ) after the director Arthur Penn was fired by the producers. The film is about an art theft by the Wehrmacht in World War II , which is prevented by the French resistance. Frankenheimer wanted to achieve as much realism as possible with this film and therefore did without models and comparable tricks.

Then Frankenheimer took a break and settled in France . Two years later (1966) he returned to the USA to make his next film - The Man Who Lived Twice is often referred to as the end of his Paranoia trilogy . Rock Hudson plays a man who receives a new identity against his will and is forced by a secret society to maintain this identity. The film was nominated for a Palme d'Or for best film at the Cannes Film Festival , but it failed to convince the critics.

In the same year he realized his racing drama Grand Prix with James Garner , Eva Marie Saint , Yves Montand and Toshirō Mifune in the leading roles. With this project, Frankenheimer was able to live out his preference for fast cars. As before in Der Zug , he refrained from using any tricks that would have impaired the realism. No higher speeds than real driving should be simulated with the racing cars.

At the end of the 1960s, Frankenheimer supported his friend Robert F. Kennedy in his presidential candidacy and, among other things, filmed his campaign appearances. He also drove Kennedy to the Ambassador Motel in Los Angeles on June 6, 1968 , where Kennedy was assassinated. For Frankenheimer, this became a traumatic experience that drove him into alcoholism . As a result, he made only a few films that were mediocre to poor. His reputation as a director fell steadily.

Even in the 1970s and 1980s, he only made a few films to attract attention. Worth mentioning are the drama The Iceman Cometh based on the stage model by Eugene O'Neill with Lee Marvin , Fredric March and Robert Ryan , as well as the sequel to French Connection - Focal Point Brooklyn (English French Connection II ) with Gene Hackman and Fernando Rey . However, this did not give his career any new boost.

It wasn't until the 1990s that he made a comeback with elaborate television films . For the action drama Against the Wall about a prison riot with Kyle MacLachlan and Samuel L. Jackson in the lead roles, he received an Emmy for best director in 1994 ; a success he was able to repeat with his next two films, Flames of Resistance ( The Burning Season , with Raúl Juliá and Carmen Argenziano ) and Andersonville (with Jarrod Emick and Frederic Forrest ).

Through these three Emmys in a row, he became a sought-after director again after a long dry spell and also turned increasingly to cinema films, where he worked with DNA - The Island of Dr. Moreau ( The Island of Dr. Moreau ), however, initially turned a huge flop. Frankenheimer took over the direction of Richard Stanley in a production that suffered from the starry airs of its leading actors Marlon Brando and Val Kilmer from the start. Frankenheimer had such a bad experience with the latter that he publicly vowed never to work with him again. The film was panned by critics and also avoided by the audience. Frankenheimer was even considered worst director with a nomination for the Golden Raspberry .

However, Frankenheimer's resurgent career did not detract from it - he received an Emmy again a year later for the television film George Wallace . With the drama about the governor of the US state of Alabama of the same name , his friendship with the actor Gary Sinise developed , with whom he was able to work one more time.

In 1998 he shot the action thriller Ronin , which despite the star cast ( Robert De Niro , Jean Reno , Sean Bean and Natascha McElhone ) did not reach the mass audience either. As with the Grand Prix , Frankenheimer attached great importance to the realistic representation of the pursuit drives in southern France and in Paris.

His next film, the experienced gangster thriller Reindeer Games with Ben Affleck , Gary Sinise and Charlize Theron , which was his last movie, shared this fate.

2002 Path to War was a television movie he made for pay TV network HBO . In it, Michael Gambon playsUS President Lyndon B. Johnson in a dispute with his advisors (portrayed by Donald Sutherland and Alec Baldwin ) over the escalation of the Vietnam War . The film received critical acclaim and was nominated for an Emmy.

Frankenheimer retired from the prequel to The Exorcist in June 2002 after back surgery . He died of a stroke after the operation in question.

Frankenheimer was an active member of the US directors' union ( DGA ) and was elected to its executive committee several times. After his death, his family set up a foundation with the DGA to support and train young filmmakers.