Dame Angela Lansbury DBE (real name Angela Brigid Lansbury Shaw, born October 16, 1925 in London ) is a British actress who has been in the film business since 1944. She is one of the last surviving film stars from the time of the studio system . She became known to a wide audience through the role of Jessica Fletcher in the television series Murder is Her Hobby (1984-1996). It has been awarded the Golden Globe Award six times, the Tony Award five times , and three Oscar nominations. In 2013 she was awarded the honorary Oscar for her life's work (awarded on November 16, 2013). In 1995 she was named a Disney legend , and in 2014 she was raised to the British nobility as Dame Commander of the Order of the British Empire . 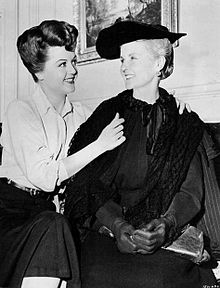 Lansbury and her mother 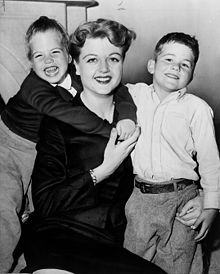 Lansbury was the oldest of three children to Edgar Isaac Lansbury (1886-1934) and Charlotte Lillian McIldowie (1895-1975) in London. She had two brothers, the twins Edgar and Bruce († 2017) born in 1930. In addition, she had an older half-sister named Isolde (1919-1987) from her mother's first marriage, who later became the first wife of Sir Peter Ustinov . Her family roots can be traced to Northern Ireland through her mother .

Through her mother, who was called Moyna MacGill by the stage name and was herself a successful actress, she came into contact with show business at an early age . She took acting classes at South Hampton School. At 14, when World War II began, Lansbury emigrated to the United States with her mother . There Lansbury looked after her twin brothers.

16-year-old Lansbury gained her first experience as an actress in Montreal and New York with performances in nightclubs and cabarets. In order to receive the engagements, Lansbury gave 1921 as their year of birth and appeared under the name Bridget MacGill or Bridget Lansbury.

At the age of 17, Lansbury played her first Hollywood role in The House of Lady Alquist (1944) with Ingrid Bergman . As a cheeky housemaid, she immediately received her first Oscar nomination for Best Supporting Role and a seven-year deal with MGM .

Lansbury got her second Oscar nomination a year later for The Portrait of Dorian Gray (1945). In Frank Capra's political satire The Best Man , she appeared in 1948 in the role of a scheming newspaper boss. During the 1950s, her film career flattened at times and she found herself mostly in smaller films. One of the highlights of this period was the comedy Der Hofnarr (1955) with Danny Kaye , Glynis Johns and Basil Rathbone , where she played the tyrant Roderick's love-loving daughter in 1955. She received her third nomination for the United Artists film Ambassador of Fear (1962), after which she began to get better roles again.

Her fame as an actress increased through the Robert Stevenson- directed Disney film The Daredevil Witch in Her Flying Bed (1971), in which she was able to bring her singing talent to the side of David Tomlinson . 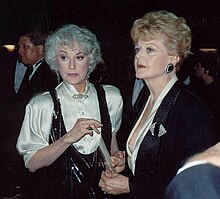 Lansbury (right) with Beatrice Arthur at the 1989 Emmy Awards

In 1978 she played alongside Peter Ustinov and Bette Davis, among others, the alcoholic pulp novelist Salome Otterbourne in the Agatha Christie film adaptation of Death on the Nile . 1980 followed the role of Miss Marple in another Christie film adaptation, Mord im Spiegel , in which she acted alongside Elizabeth Taylor , Geraldine Chaplin and Rock Hudson , among others .

She also played a major supporting role as grandmother in the fantasy film The Time of the Wolves (1984).

Lansbury played her best-known role as crime writer and hobby detective Jessica Fletcher in the long-running television series Murder is Her Hobby . The series became known during the German ARD first broadcast in 1988 under the name Immer Wenn sie Krimis wrote and has been running regularly since then on German television channels, including WDR and TNT series. Their achievements were rewarded with twelve Emmy nominations and four Golden Globes , also with twelve nominations.

In the mid-1990s, Lansbury played the leading role in a Christmas fairytale film, Mrs. Santa Claus , which has not yet been shown in German-speaking countries. She also starred in the 2006 film Nanny McPhee . In 2018 she starred in a supporting role as the Balloon Lady alongside Emily Blunt and Dick Van Dyke in Mary Poppins' Returns . 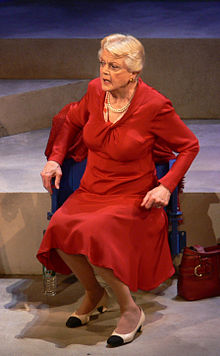 Lansbury in the 2007 Broadway play Deuce

Lansbury also achieved successes and awards on Broadway . The play with which she celebrated her greatest and longest success was the musical Mame (filmed, however, with Lucille Ball in the lead role, which, according to the autobiography, should have hit Lansbury very much, since she was actually intended for the role). Other Broadway successful roles were Rose in the musical Gypsy , which she played in both London's West End and New York Broadway, Countess Aurelia ( The Mad Of Chaillot after Jean Giraudoux ) in the musical Dear World and Mrs. Lovett in the musical Sweeney Todd . She was awarded two Grammys for her work on the sound recordings of the musicals Mame and Sweeney Todd .

In May 2007, returned Lansbury after 20 years with Terrence McNally's play Deuce to Broadway back. In March and April 2009 she appeared there in Noël Coward's comedy Blithe Spirit (Merry Spirits) as the eccentric spiritualist Madame Arcati . Angela Lansbury received the Tony Award for her acting performance ; in total she won this award five times. After 40 years she returned to the London stages in 2014 as Arcati in Blithe Spirit . From late 2014 to early 2015 she also played the Arcati on a tour through the USA and Canada. In 2015 she was honored with the Laurence Olivier Award for Best Supporting Actress for her performance in the 2014 London Production . In September 2016, Lansbury announced that it would not be returning to Broadway for reasons of age.

Lansbury is a member of the American Theater Hall of Fame.

Activity as a voice actress

Lansbury also made some significant appearances as a voice actress. In 1982 she voiced Mommy Fortuna, the wicked fairy witch in the cartoon The Last Unicorn . In 1991 she dubbed the character Madame Pottine in the Disney - Cartoons Beauty and the Beast and in the PlayStation 2 -Play Kingdom Hearts and Kingdom Hearts II . Five years later, in 1997, she gave her voice to Dowager Empress Marie in the cartoon Anastasia .

Lansbury is also active as a writer . In 1990 she wrote the book Positive Moves, which is a mixture of autobiography, wellness book and positive thinking and for which there is a training video. One of her other books is a guide to designing ceremonial speeches, especially for weddings. Both books are only available in English. 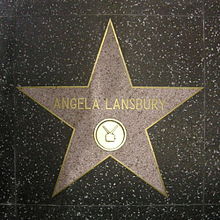 Star on the Hollywood Walk of Fame

National Board of Review Won