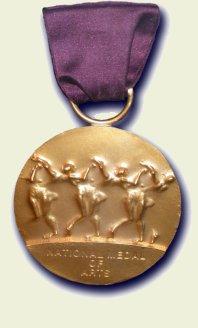 The National Medal of Arts is the most prestigious award given by the United States Congress to artists and patrons of the arts. The winners are nominated annually by the US Academy National Endowment for the Arts (NEA) and are ceremonially honored by the President of the United States . The award was first presented in 1984 and the artist Robert Graham was commissioned to design the medal.

As early as 1983, before the official award of this medal, artists and art patrons were awarded a medal at the instigation and suggestions of the President's Committee on the Arts and the Humanities by Ronald Reagan .

The medal has been awarded over 250 times in the first 25 years of its existence.

In 1997, Adrienne Rich refused to accept the National Medal for the Arts , saying:

“ I cannot accept a prize from President Clinton or the White House because what art stands for, as I understand it, is incompatible with the cynical politics of this administration. "