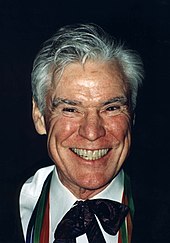 After schooling d'Amboise trained as a ballet dancer at the School of American Ballet by George Balanchine in New York City and in 1949 a member of the dance company of Balanchine led by New York City Ballet . In 1954, he played under the direction of Stanley Donen in the musical - comedy film Seven Brides for Seven Brothersthe role of Ephraim, but had to leave the set early because he was still under contract with the New York City Ballet, so the last recordings in this role were shot with another actor. As a powerful and acrobatic dancer, he appeared in both modern ballet pieces such as Stars and Stripes (1958) and in classical works such as Swan Lake .

In the 1960s, d'Amboise began working as a choreographer and staged his own ballet works such as The Chase (1963) and Irish Fantasy (1964). In 1976 he founded the National Dance Institute to teach this dance and especially ballet dance in public schools and make it known. In 1990 he was awarded a MacArthur Fellowship to provide financial support for his work . In addition, he was awarded the Kennedy Prize in 1995 , the National Medal of Arts in 1998 and a Heinz Award in 2001 for his services as a dancer and choreographer . In 2007 he was elected to the American Academy of Arts and Sciences .

D'Amboise was married to the ballerina and photographer Carolyn George until her death in 2009 and has four children with her, including the dancers Christopher d'Amboise and Charlotte d'Amboise , who in turn is married to the dancer and actor Terrence Mann .