The title of this article is ambiguous. Additional meanings are listed under Massachusetts (disambiguation) .

Massachusetts [mæsəˈtʃuːsɪts] ? / i (officially Commonwealth of Massachusetts) is a state of the United States of America and part of New England .

The name Massachusetts is derived from the word in the Massachusett language [mass-adschu-s-et] and means “near the big hill” or “near the small, big hill”, roughly “with the big hills” . He referred very likely the Great Blue Hill , a hill in the Blue Hills Reservation - State Park , about 15 kilometers southwest of Boston . The name appears for the first time in Captain John Smith's book A Description of New England (1616). The nickname of Massachusetts is Bay State (State on the Bay). 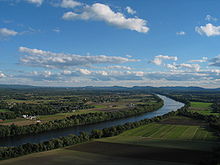 Massachusetts is located in Massachusetts Bay , borders New Hampshire and Vermont to the north, New York to the west, and Connecticut and Rhode Island to the south . To the east is the Atlantic Ocean . The islands of Martha's Vineyard and Nantucket are on the southeast coast . The largest city is Boston . Other major cities include Cambridge , New Bedford , Worcester , Lowell , Springfield, and Pittsfield . Massachusetts' highest point is Mount Greylock in Berkshire County (1,063 m). The peninsula in southeast Massachusetts is called Cape Cod and is a popular summer vacation spot. This is where the Cape Cod National Seashore is located .

The religious communities with the largest number of members in 2000 were the Catholic Church with 3,092,296, the United Church of Christ with 121,826 and the Anglican Episcopal Church with 98,963. The Jewish communities had around 275,000 members.

The oldest human traces can be traced back to around 10,500 BC. To date. At that time, Massachusetts was located south of the North American ice sheet, which dissolved at the end of the Ice Age. Around 8000 BC BC the megafauna disappeared and the Paleo-Indian cultures were followed by the archaic ones. A distinction is made between three phases, namely the early, middle and late phases, the limits of which are around 6000 and 4000 BC. Be set. The late phase extends to around 1500 BC. Chr.

The Boston metropolitan area has the earliest traces of settlement dating from around 5000 BC. Chr. On.

When the first Europeans came to the region, the Wampanoag tribes, including the Massachusett , Nauset , Nantucket, Pennacook , Pokanoket, and Pocasset , lived on the coastline into the hinterland . In the south-central part of Massachusetts lived the Mohegan , which included the Nipmuck and Pequot , while in the west lived the Mohican , which included the Pocumtuc . Today only the Wampanoag are recognized as a tribe, but there are five other tribes: the Chappaquiddick Tribe of the Wampanoag Indian Nation around Andover , the Chappiquiddic Band of Massachuset around Pocasset , the Cowasuck Band of the Pennacook-Abenaki People around Franklin , den Hassanamisco Nipmuc Tribe in the Hassanamisco Reservation and the Mashpee Wampanoag Tribe Mashpee. 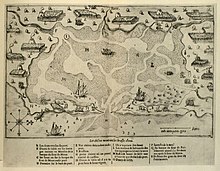 Champlains map of the port of Nauset, 1605

Samuel de Champlain met the Nauset on Cape Cod in 1606. Captain Thomas Hunt captured seven nausets and twenty patuxets in 1614 and sold them as slaves. The Nauset were initially hostile to the Europeans, but soon allied themselves with them and became Christians . Mooney estimated in 1928 that there were around 1200 nausets in 1605. In 1621 there were around 500 and in 1674 there were still 462 Nausets. They gathered in Mashpee , where they still live today.

In 1614 John Smith was the first European to sail the region. In 1617 the Massachuset, whose number Mooney estimated at 3,000 in 1628, fell victim to a serious epidemic ; at the same time they were at war with their northeastern neighbors. In 1631 there were only 500 members. The approximately 500 Nipmuck allied in 1675 in the King Philip War against the colonists; they then had to flee to the Hudson River or Canada . The Pocumtuc, who fled north, and the Pennacook fared similarly . From 1675, Indians were banned from entering Boston by a law that was not repealed until 2005.

In 1620, the English founded the Plymouth Colony in the southeast of what would later become the state , which existed until 1691. Nine years later, the Massachusetts Bay Colony was founded by English Puritans . In 1630 another group of Puritans formed Boston . The two resulting colonies were merged in 1691.

John Eliot (1604–1690) in particular drove the mission among the Indians. They were collected in separate villages, but there they fell victim to diseases brought in by Europeans. Only the descendants from Punkapog still live in Canton , Mattapan and Mansfield . For the Housatonic, a tribe of the Mahican who was allied with both the rebellious colonies against the British colonial power and previously with them against the French, Stockbridge was built in 1739 in western Massachusetts, where a mission station existed; however, they were later relocated to New York State .

From the 18th century 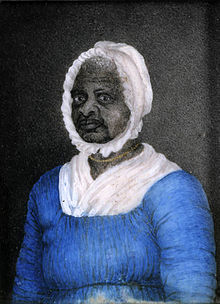 Massachusetts was one of thirteen colonies that rebelled against British rule during the American Revolution . In 1780 the Massachusetts Constitution was passed, still in force today and one of the oldest modern constitutions in the world. Around 1800 there were around 1100 Afro-Americans in Boston , making them the largest cohesive group in North America. To commemorate them, the Black Heritage Trail was established. In 1781 the black slave Mum Bett sued for release and won the case on the basis of the constitution. She changed her name to Elizabeth Freeman .

In the 18th and early 19th centuries, the Massachusetts economy benefited primarily from whaling on the island of Nantucket and the towns of New Bedford and Salem, as well as from the cod catches , the world's best fishing grounds then off the coast. Numerous representations and symbols of this fish on coins and as architectural decorations in the capital Boston bear witness to this.

Civil war until the 20th century

The state of Maine was a part of Massachusetts until 1820, although it was not directly adjacent to it. The reason for the split was Missouri's application for admission to the United States. Since this would have upset the 11:11 balance between proponents and opponents of slavery , the Missouri Compromise agreed that Maine would be separated and incorporated as a non-slave state.

During the 19th century, Massachusetts became the leading state in the advancement of the industrial revolution. Numerous factories were built here, they produced textiles, paper, tools and shoes. Before the Civil War, Massachusetts was one of the most progressive states in terms of abolishing slavery. Henry David Thoreau and Ralph Waldo Emerson were among the leading American thinkers. Massachusetts was the first state to set up a black regiment in the Civil War, the legendary 54th Massachusetts Volunteer Infantry under Robert Gould Shaw . The Robert Gould Shaw Memorial on Boston Common commemorates the 54th Regiment.

In 1987, work began on Big Dig , an extensive traffic project in Boston. 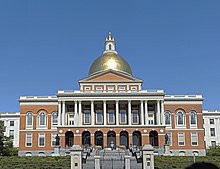 Overall, especially in national elections, Massachusetts has long leaned towards the Democratic Party . Since 1997, not a single Republican has been elected to the House of Representatives from the state's ten constituencies . The Republicans have not been able to win the state of Massachusetts in presidential elections since Ronald Reagan's 1984 landslide victory over Walter Mondale . The political landscape of the state has spawned other well-known Democrats such as Michael Dukakis and John Kerry in addition to the Kennedys . Accordingly, Republican Scott Brown's victory in the by-election for the Senate seat of the late Edward Kennedy on January 19, 2010 came as a big surprise.

According to a ruling by its Supreme Court in November 2003, Massachusetts became the first US state to allow same-sex marriage (in effect since May 17, 2004). Other important liberal decisions were made in Massachusetts; For example, the passing of a health reform that provides for basic coverage by the state for all residents and that people who live below the state-defined poverty line are paid for their health insurance. In 2008, citizens also voted to decriminalize the possession of small amounts of marijuana.

Massachusetts is one of the wealthiest states in the United States. In 2016, Massachusetts had an economic output of $ 724 billion, making it the eleventh highest economic output in any state in the United States and a 2.75% share of the total American economy. Counted as a separate country, Massachusetts’s economic output would be about the same as Sweden’s . The real gross domestic product per capita (GDP) was USD 74,564 in 2016 (national average of the 50 US states: USD 57,118; national ranking: 2). The unemployment rate was 3.6% in November 2017 (national average: 4.1%).

See also : List of personalities from the US state of Massachusetts

Counties in the US state of Massachusetts