The title of this article is ambiguous. Further meanings are listed under Nevada (disambiguation) .

Nevada ( English [nəˈvæːdə] ) is a state in the western United States of America . It covers most of the Great Basin east of the Sierra Nevada and is enclosed by California , Oregon , Idaho , Utah and Arizona .

Nevada joined the United States in 1864 as the 36th state and is the seventh largest by area. The capital is Carson City .

Parts of Nevada are restricted military areas, particularly the Nellis Range in the south, which is home to the Nevada Test Site , where nuclear weapons were tested during the Cold War .

Nevada is named after the Spanish word for snow ( Spanish sierra nevada for "snow-covered mountain range"). The nickname of the state is Silver State (" Silver State ").

The state name, Nevada , is correctly pronounced with a æ as the second vowel. The frequently encountered pronunciation with a ɑ is wrong in the opinion of the locals and is particularly noted negatively by politicians. ​​​​

The Nevada County in Arkansas is named after the state.

View over the Eldorado Valley

Nevada is geographically shaped by deserts or desert steppes in the hot, dry south and west as well as by broad, north-south oriented long valleys in the middle and in the north. The north-west can be described as a quasi-alpine foothills to the Sierra Nevada . Sagebrush shrubs ( Sagebrush Artemisia tridentata ) cover large areas of the steppe soil, while pine - and Virginian juniper trees are particularly common in the mountainous north and east.

Most of Nevada is in the sparsely populated Great Basin .

Along with South Africa and Australia, Nevada has the richest gold deposits in the world. There are also considerable silver reserves in Nevada, to which it owes its nickname "The Silver State" (the "Silver State").

Except for the city of West Wendover , which is in the Mountain Time Zone , the entire state is in the Pacific Time Zone .

The following important information is missing from this article or section:
This should say something about the structure of Nevada - Wikiolo  ( D ) 13:29, 29 Mar. 2020 (CEST)
Help Wikipedia by researching and pasting it .

Nevada has a dry desert climate . The winters are relatively mild (around 10 ° C), depending on the altitude, but the nights are usually associated with frost (−8 ° C in Reno ). In the summer, on the other hand, it is very hot with temperatures above 30 ° C. In addition, there is extreme drought, which means that it sometimes gets 20 to 25 degrees colder at night. There is about 100–200 mm of precipitation per year, in winter partly as snow.

Mexico had to cede the area to the USA in the Treaty of Guadalupe Hidalgo . In 1850, the Utah Territory was established by Congress , which then comprised the states of Utah , Colorado and Nevada today . In 1859 the Comstock Lode , a rich silver and gold deposit, was discovered and Virginia City was established. With this discovery, more and more people flocked to the region: gold prospectors, prospectors , traders and others who were looking for their fortune.

On March 2, 1861, Nevada was separated from the Utah Territory and adopted the current name. On October 31, 1864, Nevada finally became the 36th state to join the United States.

In 1866, Nevada expanded to include the western part of the Utah Territory. On January 18, 1867, the part west of the Colorado River of the Pah-Ute County of the Arizona Territory was annexed, so the current area south of the 37th parallel, which today largely forms the Clark County .

During the Great Depression, Nevada allowed gambling on March 17, 1931 to fuel economic growth. In addition to gambling, in Nevada, as the only state in the USA, prostitution is traditionally legal in some districts of the state; but specifically not in Clark County and its capital Las Vegas.

The remoteness of Nevada was a prerequisite for the construction of large, secret army bases during World War II . Las Vegas Army Air Field and Tonopah AAF were built by the United States Army Air Forces in 1942. Senator Pat McCarran successfully campaigned for military facilities to be built in the Las Vegas area. The Las Vegas Army Gunnery School , Basic Magnesium Plant , Nellis Air Force Base and other facilities resulted in economic growth.

Atomic bomb tests began on the Nevada Proving Ground ( Nevada National Security Site since 2010 ) in the Nellis Range in 1951. In total, more than 1,000 nuclear explosions were carried out. It was there that most of the American nuclear bombs above and below the surface were tested during the Cold War ; In addition to the former Soviet nuclear weapons test site at Semipalatinsk near Kurchatov near Semei in the east of what is now Kazakhstan, it is the largest test site in the world. There are also facilities in the state for testing secret military missiles, such as the legendary Area 51 .

The most important native people of Nevada include the Paiute in the west and south and the Western Shoshone in the north and east of the state. Despite an initial contractual respect for territorial Indian sovereignty (e.g. in the " Ruby Valley Treaty " of 1863 between the USA and the chiefs of the Western Shoshone ), the political construction of Nevada, which was taking place in parallel, has been incorporated into the United States since the 1860s and massive discrimination against Native American rights until recently has resulted in tension and conflict between federal agencies and Native American Indians. The two Western Shoshone ranchers and recipients of the Alternative Nobel Prize (1993) Mary and Carrie Dann from Crescent Valley became best known for defending Indian rights . 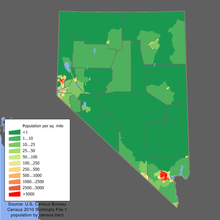 Nevada became a majority-minority state in 2016; that is, white non-Hispanics lost their absolute majority of the population.

The religious communities with the largest membership in 2000 were the Catholic Church with 331,844, the Church of Jesus Christ of Latter-day Saints (Mormons) with 116,925 and the Southern Baptist Convention with 40,233 followers. There were 77,100 members in Jewish communities . 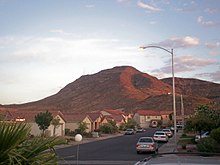 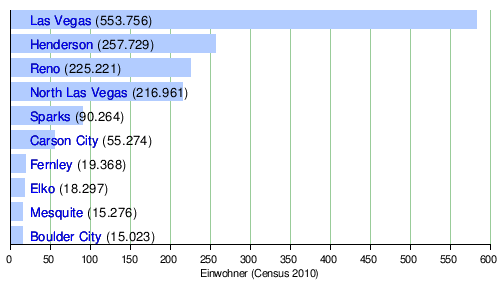 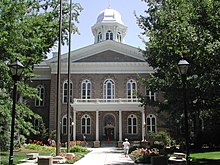 Nevada's capital is Carson City . Politically, the state is shaped by the contrasts of three interest groups: the north-west (Reno, Carson City, Sierra Nevada), which is characterized by livestock and timber industries, on the one hand, and on the other, the center and the north, whose backbone is the pasture industry and huge gold mines. Due to the strong growth of Clark County since the mid-1980s with Las Vegas in the south, which is now home to more than half of Nevada's residents, a third camp with particularly high levels of tension has developed towards the other two parts of the country. Above all, the huge water demand of the player and tourist metropolis contributes to the discontent of the cattle and grazing industry in the north, which has been suffering from persistent drought for more than a decade.

The possibility of one day having to house the nuclear repository for the USA in the Yucca Mountains has been controversial in Nevada since the late 1980s . The rock massif lies in the area of ​​the "Nevada Test Site" and is considered by the Western Shoshone Indians as part of the territory assured to them in the "Treaty of Ruby Valley" in 1863. When it comes to resisting Yucca Mountain as a nuclear waste disposal facility, the Nevada state government is on a rejection front with the indigenous peoples and with most of the state's residents.

Nevada was considered a swing state until the 2016 presidential election , with the liberal and rapidly growing Las Vegas in Clark County, which largely outweighed the rural-conservative rest of the state, so that Washoe County in the west with Reno was often decisive for the election . In the three presidential elections from 2008 to 2016, Nevada voted more democratic than the national average. The longtime US Senator Harry Reid , however, built a powerful political machine in the state since the mid-2000s, which has brought the Democrats into an increasingly dominant role among the electorate, which is structurally democratic by about 29 percent of Latinos. They won three of the four congressional constituencies in the 2018 elections, the Republican Senator Dean Heller , who was up for re-election, was clearly beaten by the Democrat Jacky Rosen , a Democrat was elected as governor for the first time in two decades with Steve Sisolak , and the democratic majorities in the state Legislatures were expanded. Reid had built a permanent infrastructure of paid party workers outside of election years and had drawn attention and resources to Nevada by moving the local caucus in the presidential primary to an early date in the election year. He also built a dense network of activists by sponsoring immigrant and environmental advocacy organizations that work with the powerful unions in Las Vegas to mobilize voters. The structure of the jobs in the service area gives the trade unions - the casino employees are organized in the Culinary Union - a particularly important role, but also ensures that this diversified and volatile population group has to be mobilized again and again through costly constant new registrations and requests to vote.

Nevada has the death penalty for murder, but of the 12 people executed since its reintroduction, 11 have waived appeals and wanted execution. The last execution took place in 2006, the only one so far involuntary (Richard Allen Moran) in 1996 (as of mid-2017).

In the 116th Congress of the United States (2019-2021), Democrats Jacky Rosen (Class 1, since 2019) and Catherine Cortez Masto (Class 3, since 2017) represent Nevada in the Senate. In the House of Representatives, the Democrats have 3 MPs and the Republicans have 1 MP.

In November 2016, the majority of the population voted in a referendum to legalize the sale and possession of marijuana in small quantities for adults over the age of 21.

The Great Basin National Park is the only national park that is entirely located in Nevada. In addition, Nevada has a share in Death Valley National Park on the California border. Lake Mead National Recreation Area is on the Arizona border . The state also has 26 state parks

The most important economic factor in Nevada, due to the liberal gambling laws and the good winter sports opportunities, is tourism. Livestock farming and mining (copper, gold, mercury) are important.

Counties in the US state of Nevada