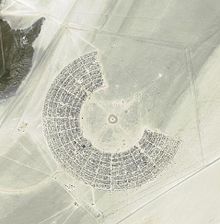 Burning Man (German "Brennender Mann") is an annual festival in the US state of Nevada in the Black Rock Desert . The salt flat was formed from the glacial Lake Lahontan and is located about 150 km north-northeast of Reno .

The festival lasts nine days and traditionally ends on the first Monday in September, US Labor Day . Its main event is the burning of an annually changing oversized statue - the Burning Man - on the sixth day of the festival.

Larry Harvey (1948–2018) was the founder of the festival. He held the festival for the first time in 1986 with 20 participants on Baker Beach, a beach on the grounds of the Presidio in San Francisco . It was then held annually with an increasing number of participants, until in 1990 burning the statue on the beach was banned. The Burning Man Festival then moved to the Black Rock Desert in Nevada because the increasing number of partiers meant that there was not enough space on the beach. The statue - "The Man" - stood for a time on a pedestal that was raised over the years. At Burning Man 2014 she was not on a podium and was all the higher.

The event is now visited by over 75,000 people annually. Since 2011, the demand has exceeded the supply of spaces in the temporary city.

The festival is not only a large art exhibition , but is also considered a place of intense self-expression and a big party. During the festival, a temporary city with a hospital and airport will be built in the desert, which will be completely dismantled afterwards. A team of volunteers ensures that no traces (especially rubbish) are left behind.

Only pedestrians, cyclists and art cars , which Burning Man refer to as “Mutant Vehicles”, are allowed to enter the festival . Burning Man is famous for its particularly imaginative and bizarre Art Cars. Running mutant vehicles are also particularly noteworthy, such as the eight-legged steel spider Mondospider from 2007, designed for the festival .

Reception in film and literature

Reception in the sciences

Ethnographic and cultural studies field research has dealt with how community and identity formation take place at the festival. So the question was asked to what extent Burning Man can be seen as an alternative to society outside the festival.

Burning Man's great popularity has resulted in similar events developing around the world. Some of these events are officially linked to Burning Man through what is known as the "Regional Network". They are called regional events .

Since 2004 in Spain near Sariñena in the province of Huesca the Nowhere instead. It is Europe's largest "regional event". It is pronounced no | where (English nowhere), at the same time it is a play on words with now and here ("now here"). It is also called Euro Burn and had around 3500 participants in 2019. It is based on the 10 principles of Burning Man. However, there are slight changes. Open fires are completely forbidden because of the risk of fire, so there is no burning of a figure like in Nevada. The event is therefore also referred to as "NoBurn Burn" in the community. In addition to Nowhere, there are a number of other regional events in Europe, such as the Borderland in Scandinavia, the Swissburn in Switzerland or Where the Sheep Sleep in the Netherlands.

The world's largest regional events are the AfrikaBurn in South Africa and Midburn in Israel, each with around 11,000 participants.