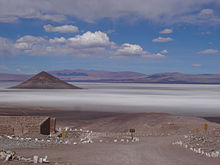 A salt flat is a sedimentation area of an intermittent body of water . It continues to form in the interior of endorheic basins in semi-arid areas, but unlike Sabchas it is surrounded by high areas.

Some authors include the inland Abkhazia in the term Playa , the term Sabcha is restricted to the coastal Sabchas. It doesn't matter whether it is surrounded by high areas or not.

Depending on their occurrence, salt plains have different names:

This point contradicts the information in the article Schott (Geology) . Please take part in the discussion and remove this module if necessary.

The finest material is washed in by periodic or episodic inflows, which remains as a salty clay when the water evaporates , so-called salt clay . The only small deposits in each case add up over time as evaporite to form thick layers of layers. If it is later covered with other sedimentary rocks, a salt dome can form.

During the rainy season, the salt plains are covered with shallow salt lakes. During the dry season, dry cracks form on the flat surfaces .

The salt flats of the earth

Examples of salt flats are parts of the Etosha pan and the Makgadikgadi salt pans in Africa, for example the North African Schotts or the Salar de Uyuni in Bolivia . In the United States , the Salt Flats in Utah or the Black Rock Desert in Nevada are well-known examples of salt flats. Its extensive, absolute evenness made it the venue for speed records .