The Dead Sea is one of the most famous salt lakes. The satellite images show anthropogenic changes over the past 40 years.

Laguna Miscanti , a salt lake in the Atacama Desert in Chile. 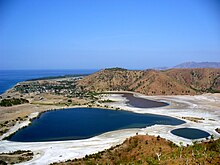 The three salt lakes of Tasitolu , an important habitat for water birds

Salt lake (also: Salzwassersee ) is the name for an inland body of water with salt water without drainage into an ocean , located in a depression or a basin . Salt lakes are mostly located in arid areas or deserts, so that the constant evaporation of the salt and mineral content of the water increases. If the evaporation is greater than the water inflow, a salt desert is created . With seasonal weather such as alternating rainy and dry seasons , a constant change between salt desert and salt lake is possible, as in the Atlas Mountains . Human intervention such as diverting the water for irrigation can also cause the water level in such lakes to fluctuate significantly.

Salt lakes are used to produce table salt , to extract salt as a bath additive - especially from the Dead Sea - and to break down phosphates . The salt flats of partially evaporated salt lakes may provide a smooth surface on which vehicles have good traction, and provide good conditions for high-speed racing. The Bonneville Flats in Utah are famous for speed records, some such planes are also a cost- Start - used runway in aviation, such as the Rogers Dry Lake . Salt lakes also attract many tourists , on the one hand because of the bathing experience (you can practically not go under), on the other hand, the water and the air in the area, especially at the Dead Sea, alleviate skin diseases such as neurodermatitis or psoriasis .

The Don Juan Lake in the Antarctic dry valleys has only a tiny area of ​​0.03 km² and with 44% is the lake with the highest salinity on earth. In contrast, the salt content of the oceans is only around 3 to 4%. If, in addition to sodium chloride, carbonates are also dissolved in larger quantities, the pH value of salt lakes increases. One then speaks of soda or soda lakes .

The most famous salt lakes include the Dead Sea with an average of 28% salinity and the Great Salt Lake in Utah with 25% salinity. The salt content of the shrinking Aral Sea has now increased to around 8%.

Other salt lakes are:

Ordinary fish and mollusks cannot live in very salty waters. There are, however, some types of creatures that have been able to adapt to such conditions, the so-called halophiles . This also includes Artemia salina ( brine shrimp ), which in turn attracts flamingos .