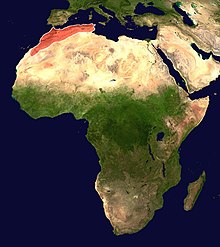 Satellite image of Africa with the Atlas Mountains highlighted 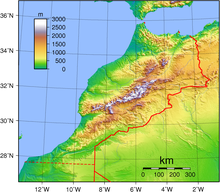 The Atlas ( Arabic جبال الأطلس, DMG Ǧibāl al-Aṭlas , Berber ⵉⴷⵓⵔⴰⵔ ⵏ ⵡⴰⵟⵍⴰⵚ Idurar n Waṭlaṣ ) is a high mountain range in northwestern Africa , which extends over the states of Morocco , Algeria and Tunisia for a length of about 2300 kilometers . The highest peak is the Toubkal in southern Morocco at 4167 meters . The Atlas forms a distinctive dividing line between the relatively humid climate in the far north of the Maghreb and the extremely dry Sahara . It is part of the Alpidic mountain system .

The mountains are divided into the following mountain ranges (the maximum height in brackets):

In Tunisia only the foothills of the Algerian mountain ranges Tellatlas and Sahara Atlas can be found. Tunisia has a share in the Aurès , which is occasionally also included in the atlas.

The atlas, as it appears today, has to be divided into two parts for understanding, since its creation took place in two different geological phases. The first part consists only of the anti-Atlas, which was created in the Upper Palaeozoic (approx. 300 million years ago) as a result of collisions between the continents of that time. It was not until the Tertiary (around 65 million to around 1.8 million years ago) that the remaining mountain ranges that form the Atlas today were formed because the land masses of Europe and Africa at the southern end of the Iberian Peninsula pressed against each other. Since the land unfolded into a mountain range due to this pressure, the Atlas is called a fold mountain range . The same movement formed the Alps and the Pyrenees at the time, when today's Strait of Gibraltar was closed . It was not until the Quaternary (from around 1.8 million years ago) that the African continent broke away from Europe again due to weakening pressure.

The basement mountains of Africa were formed in the Precambrian (approx. 4.5 billion to approx. 550 million years ago) and are therefore much older than the Atlas Mountains, which are also located in Africa today. The atlas therefore has a special role among the mountains of Africa, as it does not fit in with the rest of Africa in terms of history.

In terms of plate tectonics , the atlas forms the boundary between the Eurasian plate in the north and the African plate in the south. If these two plates rub against each other, earthquakes can occur. The city of Blida, located in the middle of the Tell Atlas, with a population of around 265,000 (2005) today, was completely destroyed twice by strong earthquakes in the 19th century. In the city of Ech Cheliff, also in Algeria , with a population of around 235,000 (2005) today, around 5,000 people died in an earthquake with a magnitude of 7.3 on the Richter scale in 1980.

The atlas is rich in raw materials, the extraction of which is attractive to people. There is iron ore , lead ore , copper , cobalt , rock salt , phosphate , mercury and some silver , limestone , bituminous coal and natural gas . With this variety of raw materials, it is an exception among the mountains of Africa, because the Saharan mountains Ahaggar and Tibesti or the mountains of Ethiopia in the east of the continent have no raw material deposits at all. Only in the south of the continent are there areas that are similarly rich in natural resources.

Basically there is a Mediterranean climate. The summers are therefore quite hot, while in winter, due to the altitude, there is heavy snowfall with not too low temperatures. Most of the year, at least the higher peaks remain covered with snow, but it melts again in the summer months at the latest. So there are no glaciers .

In the Schotts highlands, located roughly in the middle of the Atlas, the mean monthly temperatures are around 26 ° C in summer and around 4 ° C in winter.

The atlas as a dividing line

Cold and humid air masses penetrate the Atlas from the north, while the very hot and dry winds of the Scirocco reach it from the south via the Sahara . It thus forms a dividing line between two very different climatic spaces. The southern slopes of the Sahara Atlas therefore have a completely different climate than the northern slopes of the Tell Atlas. The area of ​​the slopes facing the desert shows hardly any precipitation and is subject to strong temperature fluctuations due to the time of day. Further north you will find a somewhat milder climate with significantly more precipitation and less temperature fluctuations during the day. In addition to the strong daily fluctuations in temperatures, the southern climate also has a more continental character, which makes the winters colder and the summers warmer.

Due to the snow masses that melt every year in spring, and also due to new precipitation at this time, numerous streams and rivers arise, some of which dry up again after the snow has melted. These rivers, which only carry water at times, are called al-wādi (الواد - the valley) . Between the Tell Atlas and the Sahara Atlas in the highlands of the Schotts , salt lakes known as Schotts are created by rain and meltwater , which dry out again in the late summer except for small pools .

The Moroccan part of the atlas as a satellite picture once in January, once in April and a water card that the biggest bulkhead and wadis shows

As a result of centuries of deforestation and grazing, the forests of the Atlas are now mostly replaced by evergreen shrubs. Today, macchia bushes , cork oaks , Aleppo pines , cedars , junipers , some wild olive trees , and especially in Morocco argan trees and large areas of thyme and rosemary grow there . There are also cacti , fig trees and various palm trees . In well-watered places you can also find loose stands of acacia and jujube . The flora of the region also shows how great the differences are between the northern and southern Atlas. The fertile soils are also used for agriculture.

The animal world is extremely diverse due to the two clashing climatic zones . In the north there are the typical animals of the Mediterranean area, such as wild boars , which have become very rare in the meantime, or now domesticated donkeys . To the south, there are the specialized animal species of the desert region, such as gazelles , the endangered leopards and cheetahs , hyenas , desert hares and gerbils . Both regions also have small reptiles , snakes and of course numerous types of insects . 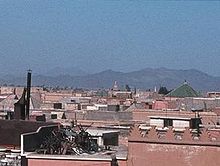 Roofs of Marrakech with the High Atlas Mountains in the background

All larger cities of Algeria are located in the northern part of the country and thus in the region of the Atlas Mountains, as the Sahara is located in the southern part with extremely poor settlement conditions. The big cities of Tunisia and Morocco are also in the region of the mountains. The densest settlement areas are located directly on the coast to the Mediterranean . Some large cities, such as the Moroccan Marrakech with around 850,000 (2004) inhabitants, are right at the foot of the mountains. The Algerian cities of Constantine at an altitude of 650 meters with around 500,000 (2005) inhabitants and especially El Djelfa at over 1,100 meters with around 235,000 (2005) inhabitants are the only cities of any significant size that are really in the mountains.

Between the smaller villages, small groups of children who are listed as “temporary settlers” in the official population statistics keep gathering.

There are numerous smaller settlements wherever water is available in the form of wadi .

Homer and Herodotus , the Greek poets and historians from antiquity , saw the atlas as the western limit of the then known world. Here Atlas supported the vault of heaven.

To the Arab geographers at the time of Islamic expansion , the mountainous north-west promontory seemed like an island, as it was cut off by the sea to the north and the barren desert to the south. According to their ideas, this island rises above the Andalusian mountainous country in present-day Spain , and for them it also formed the extreme west of the world. On the other hand, the Arab geographers of the time expanded the concept of the Atlas Mountains beyond its natural limits to the east.