The title of this article is ambiguous. For the Belgian composer, conductor and priest, see Mathieu Rosmarin . 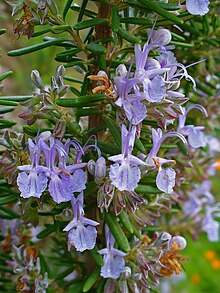 The rosemary ( Rosmarinus officinalis ) is one of two species of the genus Rosmarinus , and an evergreen shrub belonging to the family Labiatae (Lamiaceae).

The name rosemary comes from the Latin ros marinus and means " dew ( ros ) of the sea ( marinus )", ie "sea dew". The reason given is often that rosemary bushes grow on the shores of the Mediterranean Sea and that dew collects in their flowers at night. An older interpretation of the origin of the name went back to the Greek term rhops myrinos (balsamic shrub). This includes a possible namenskundlicher context of the Greek words libanotis (rosemary) and Libanos (incense).

The evergreen, bushy, branched shrub smells intensely aromatic and reaches a size of 0.5 to 2 meters. The branches are brown and mostly upright. Older branches have peeling bark. The 10 to 40 mm long and 1.5 to 3 mm wide leaves are opposite, sessile and narrowly linear. On the upper side they are deep green and wrinkled and covered with a thick epidermis , on the underside of the leaf they are hairy white to gray tomentose. The edges are rolled down. This protects the leaf from drying out.

The flowers can appear all year round. They stand on two- to ten-flowered, star-haired, felt whorls . The calyx is bell-shaped, two-lipped and significantly larger at the fruit time. The upper lip is in two parts, the lower lip three-lobed with large middle lobes. The crown is light blue, rarely pink or white, 10 to 12 mm long, two-lipped with a bent back upper lip. The middle lobe of the lower lip is hollowed out in the shape of a spoon and curved downwards. The two stamens protrude far from the flower. The Klausen are brown, obverse-shaped.

Rosemary is not to be confused with the plant type rosemary heather from the heather family .

The plant grows wild in the western and central Mediterranean area, especially in coastal regions from Portugal to the Ionian Sea . The species has also been cultivated in the eastern Mediterranean and on the Black Sea since antiquity and occasionally occurs in the wild, sometimes even forming populations, e.g. B. on Santorini . Rosemary prefers sunny, dry, lime-rich locations. It is typical of the scrub vegetation of maquis and garigues . He is a species of the Rosmarino-Ericion Association.

Rosemary is often cultivated as an ornamental and aromatic plant. It is not known when rosemary came to Central Europe, but it is already recorded in the country estate ordinance Capitulare de villis vel curtis imperii on the decree of Charlemagne . Rosemary was introduced to England in 1328 by Queen Philippa of Hainaut .

One can distinguish the following subspecies:

According to BT Drew & al. (2017) these subspecies or varieties are best grouped under the genus Salvia under the name Salvia rosmarinus Spenn.

The plant can be propagated vegetatively using cuttings . The generative reproduction via seeds is possible, but requires a warm climate. The germination time is about four weeks. The rosemary is susceptible to long-term moisture and needs well-drained, humus-rich soil. The plant will grow better in dry conditions. It is not hardy north of the Alps. In late winter, the small shrub is cut back so that it becomes bushier.

Whole twigs are ideally harvested, not individual leaves. It can be harvested all year round.

In the mixed culture , the sage is suitable as a neighbor.

Use as a scented plant

Rosemary has a very intense, aromatic smell and a resinous, slightly bitter taste that is somewhat reminiscent of camphor and eucalyptus . It was also used as a substitute for incense because of its similar odor .

Rosemary was a component of one of the first distilled perfumes that combined essential oil with alcohol . The mixture was called "Hungarian Water" after Queen Elisabeth of Hungary (1305-1380). Legend has it that a hermit who gave the queen the perfume assured that it would preserve her beauty until her death.

Rosemary was first used in religious cults and in pharmacists ' remedies before it found its way into the kitchen. Rosemary is an important spice in Mediterranean cuisine (especially in Italy and Provence ) and is part of the Provence herb mixture . It is also considered a classic grill spice and goes well with meat, poultry, lamb, zucchini, potatoes and pasta. The leaf or rosemary honey is also used for desserts. Apple jelly can be flavored with rosemary, for example. Rosemary is often used in herb butter . Rosemary is or was temporarily used as a bitter substance in beer .

In naturopathy, rosemary is used internally as a tea to stimulate the circulatory system and against flatulence , above all it has a stimulating effect on the blood supply to the abdominal organs and the formation of gastric and intestinal juice. The drug also has a bile and diuretic effect and is used as a tea to stimulate appetite. Excessive doses can cause intoxication and convulsions. Daily doses of 6 g of leaves for tea infusions, 20 drops of essential oil and 50 g for baths should not be exceeded; Pregnant women are generally not advised to take it.

Externally, rosemary increases blood flow and is therefore used in baths for people with poor circulation, circulatory disorders as well as gout and rheumatism (for example, as rosemary alcohol). In addition to rosemary alcohol, the ointment can also be used against rheumatism and migraines. As a bath, the infusion has a disinfectant effect and promotes the healing process of infected, poorly healing wounds.

Rosemary oil has a powerful antiseptic effect that is 5.4 times that of carbolic acid (phenol) .

Rosemary tea has an antifungal effect on various harmful fungi and can therefore be used as an in-house plant protection or tonic.

In an American study from 2017, a so-called prebiotic and at the same time antibacterial potential of rosemary spice extract is described.

The essential rosemary oil forms different chemotypes depending on the location, altitude, climate and soil, which differ in completely different ingredients and modes of action. It is obtained by steam distilling the herb. Rosemary oil is one of the skin-irritating essential oils. The main growing regions are Spain , France , North Africa and the Balkans.

Application of the oil

According to the European Pharmacopoeia, rosemary oil shows antimicrobial activity against numerous bacteria , yeasts and molds and has a circulation-promoting effect on the skin . For circulatory problems, rheumatic diseases, strains, a 6- to 10-percent preparation in the form of bath additives or in 6- to 10-percent ointments is indicated. Internally you take 3–4 drops on sugar or in warm tea.

Other areas of application are the perfume industry and aromatherapy .

Single-variety honey, which comes from the flowers of rosemary, has a fresh, light yellow color and a liquid consistency; it turns into a whitish, ointment-like honey. The strong aroma of rosemary honey corresponds to the aroma of the plant itself, to soften the intense aroma it is often blended with other types of honey.

Symbolism of the rosemary

As a symbol, rosemary represented love. In ancient culture, rosemary played a major role as a plant consecrated to the gods, especially Aphrodite . Troubadours presented the lady of their choice with rosemary, while Ophelia tied Hamlet a rosemary wreath as a token of their loyalty. and in Germany brides wore a rosemary wreath for a long time before the myrtle became fashionable.

Rosemary also symbolized the memory of the dead. The Egyptians gave their dead rosemary twigs to sweeten the journey to the land of immortal souls with their fragrance; in Greece, rosemary wreaths were made. In the literature, rosemary appears as a dead plant in Shakespeare and Hebel . Rosemary and thyme were often worn as bouquets at funerals and processions. It was hoped in this way to be immune to contagious diseases. In London at the beginning of the 18th century, it was customary for every mourner who accompanied a coffin to the cemetery to receive a sprig of rosemary from the servant of the house. On the one hand, this rosemary sprig was worn as a symbol of memory, but its scent also helped to mask the stench of death. As soon as the coffin was placed in the grave, all the mourners threw their rosemary sprigs down into the grave. In Dresden , according to tradition, the Rosmaringasse (today built over by the Kulturpalast and moved to its northern edge) goes back to the custom of selling rosemary to visitors to the Frauenkirchhof here .

As a symbol of death, rosemary appears in the song I dreamed the night , whose lyricist August Zarnack . This also applies to the song Rosmarin from Des Knaben Wunderhorn , which was set to music by Johannes Brahms , Robert Schumann and others.

The musicians of the Pagan Folk group Faun, on the other hand, use rosemary in their song of the same name as a symbol of love and longing. Rosemary has a similar meaning in the English folk song Scarborough Fair .

In Spain, the Romero is both rosemary and the Christian pilgrim of a Romería . 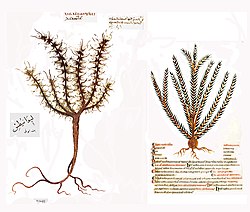 In the first century Dioscurides wrote about two species of "libanotis", which were interpreted as "incense trees" based on the description he gave (also with reference to the corresponding passages about the "libanotis" in the natural history of the plants of Theophrastus ) ( Cachrys libanotis L, Ferula nodifera L. ...). Dioscurides then described rosemary ( Rosmarinus officinalis L. ) as "the» libanotis «, which the Romans call» rosmarinus « , and characterized it as a plant with an aromatic smell, which not only wreathers use. It has warming power, cures jaundice and is added to the invigorating ointments.

Pseudo-Apuleius , which was decisive in northern European medicine from the 4th to the 12th century , gave the following indications for »rosmarinus«:

The preparation and the use of a "wine of rosemary" is detailed in the Arnald of Villanova among pushed - "Liber de VINIS treaty ... from Bewarung and Beraitung the wine" portrayed. This treatise was written in Africa, was translated into Hebrew in 1358 and was in circulation as a Lower Franconian manuscript by 1400 at the latest. It was translated into High German in 1478 by Wilhelm von Hirnkofen and printed in Esslingen.

A medical treatise on rosemary that was widespread from the Middle Ages to the 16th century and beyond is the so-called rosemary tract, which has been documented since the 14th century and probably first originated in the Mediterranean region in the 13th century .

Medicinal plant of the year in Germany