The Labiatae or Lamiaceae (Labiatae or Lamiaceae) form a plant family in the order of Lippenblütlerartigen (Lamiales). The family is divided into seven subfamilies and includes about 230 genera and more than 7000 species . They are represented worldwide in all climate zones .

They grow as a year to perennial herbaceous plants or woody plants: Half bushes , shrubs , trees or vines . They often contain essential oils and have an aromatic smell. The stem axis is often hollow and square.

The mostly opposite, sometimes whorled or rarely alternate leaves are petiolate to sessile. The simple leaf blade is rarely pinnate, often simple. The leaf margin is smooth, notched, serrated or serrated. Stipules are missing.

The flowers are single or axillary in dense mono- or dichasial pseudo whorls . Species are seldom dioecious separately sexed ( diocesan ).

The mostly hermaphrodite flowers are zygomorphic and five-fold. They are reminiscent of the upper and lower lip. The five sepals are fused tubular with five calyx teeth or two calyx lips. Members of this family of plants can often be recognized by their characteristic "lip flowers". They are characterized by an "upper lip" (often receding) and a "lower lip" of the flower; As a rule, two of the five petals are fused to the upper lip and three to the lower lip. Similar flower types also occur in other families of the order of the mint-like (Lamiales). There is only one circle with originally five stamens ; one is reduced, so that only four, sometimes only two, fertile stamens are present, which are fused with the base of the corolla tube. Two carpels are a top permanent ovary fused; it is divided into four chambers by false partitions. The stylus ends in two scars. Pollination occurs by insects ( entomophilia ) or by birds ( ornithophilia ). The labiates have developed highly specialized pollination mechanisms that are especially adapted to the flower visitors.

Typically, Klaus fruits are formed, which disintegrate into four solitary partial fruits (Klausen). But there are also taxa with berries or stone fruits (Viticoideae). Some species make winged nuts .

The most important ingredients are essential oils : for example poisonous ones such as camphor , perillaketone, pinocamphone, pulegone, thujone . Often there are also non-volatile, diterpenoid bitter substances such as carnosol (picrosalvin, marrubine) and carnosic acid . 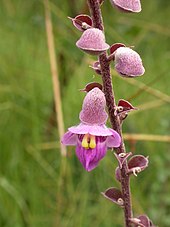 The family is divided into seven subfamilies and includes about 230 genera and 5000 to more than 7000 species . Here are the subfamilies with their genera and species numbers as well as their distribution:

Many of the plant species in this family are characterized by essential oils , which is why they are used as aromatic or medicinal plants . More than 60 species are planted in the temperate areas alone, and many species - such as mint ( Mentha ), basil ( Ocimum basilicum ), lavender ( Lavandula ) or sage ( Salvia ) - are cultivated commercially. Two types of Pogostemon from Southeast Asia ( Indian patchouli and Javanese patchouli ) provide patchouli oil, which is a valuable raw material for heavy perfumes. Some species of the mint family are primarily of regional importance. Sideritis ( Sideritis ) are in the eastern Mediterranean as Teekraut in Iran used to flavor yogurt with Ziziphora and in India and Southeast Asia, the tubers are Coleus rotundifolius as a potato substitute. The fruits of monk's pepper ( Vitex agnus-castus ) are used as a spice.

Many species are used as an ornamental plant, including Ajuga , Monarda , Nepeta , Physostegia , Phlomis , Salvia , Scutellaria , Stachys and Teucrium .