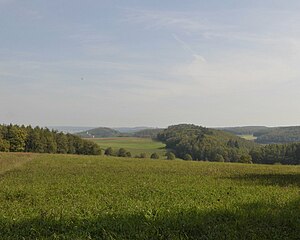 View over the Ries with Niederhaus Castle in the background

The landscape of the Ries around Ederheim

The district of Donau-Ries is the northernmost district of the Bavarian administrative district of Swabia and lies on the state border with Baden-Württemberg .

The district of Donau-Ries includes the Nördlinger Ries in the northwest , an almost circular basin landscape sunk into the low mountain range of the Swabian-Franconian Jura, whose diameter is about 22 km. The Ries owes its existence to a meteorite impact , the so-called Ries event .

The Franconian Alb joins the Ries in the east . In the south it falls to the Danube-Lech area, which geologically belongs to the Riesalb . The Danube brushes the southern district area from west to east. There lies the large district town of Donauwörth , in whose urban area the Zusam and Schmutter coming from the south and the Wörnitz flowing from the north flow. The Wörnitz flows through the district from north to south and takes in the Eger from the west at Heroldingen (city of Harburg ) . In the south-east of the district near Marxheim , the Lech flowing in from the south flows into the Danube.

On January 1, 1939, as everywhere in the German Reich, the designation district was introduced. The district offices became the districts of Donauwörth and Nördlingen.

In 1940 the immediate district towns of Donauwörth and Nördlingen were incorporated into the districts, but this was reversed in the case of Nördlingen in 1949.

As part of the regional reform in Bavaria , the new district of Nördlingen-Donauwörth was formed on July 1, 1972 from the following components :

On May 1, 1973, the new district was renamed the Donau-Ries district . The provisional district seat was Nördlingen, but in 1973 Donauwörth was established as the district seat.

On May 1, 1978, the Ensfeld community moved from the Donau-Ries district to the Eichstätt district and was incorporated into Mörnsheim . On the same day, the communities Ammerfeld and Emskeim moved to the district of Neuburg-Schrobenhausen and were incorporated into the market town of Rennertshofen .

On January 1, 1998, Donauwörth was also declared a major district town, as this town was also independent until 1940.

In the 2016 future atlas , the Donau-Ries district was ranked 150th out of 402 districts, municipal associations and independent cities in Germany, making it one of the regions with a “balanced risk-opportunity mix”.

The district has no share of motorways. The most important traffic axes are the federal highways.

In a north-south direction, the B 2 crosses the district, coming from Nuremberg (connection to the A 6 ) north of Monheim, reaching the district area and leaving it past Buchdorf, Kaisheim, Donauwörth and Asbach-Bäumenheim south of Mertingen in the direction of Augsburg (Connection to A 8 ).

North of Donauwörth, the B 25 branches off from the B 2 . It runs first in a north-westerly direction past Harburg through Möttingen and then on via Nördlingen, Wallerstein, Marktoffingen and Fremdingen to the north in the direction of Dinkelsbühl (connection to the A 7 ).

From the south-west (from Heidenheim an der Brenz ) to the north-east (towards Ansbach ) the B 466 runs through the district and touches Ederheim, Nördlingen, Oettingen and Hainsfarth.

The B 29 runs from Nördlingen in a westerly direction via Aalen (connection to the A 7) to Waiblingen .

→ Main article : List of district roads in the Donau-Ries district

The north-south railway line Augsburg – Gunzenhausen – Nuremberg, built by the Bavarian state, reached Donauwörth in 1844 and was extended in 1849 via Nördlingen to Gunzenhausen .

The Württemberg -Bad Cannstatt – Nördlingen railway and the Nördlingen – Dombühl railway were opened in 1876.

With the Ingolstadt – Neuoffingen railway line , which was opened to Donauwörth in 1874, an important railway junction was also created here; the route was continued to Höchstädt in 1877.

State local railway lines were built in 1903 from Nördlingen to Wemding and in 1905 from Mertingen train station to Wertingen .

The direct route from Treuchtlingen to Donauwörth over the Alb with the Fünfstetten – Monheim branch has only been used since 1906. This created a rail network with a length of 166 km.

Passenger traffic on five local railways with a length of 68 km was stopped relatively late:

After all, almost 100 km of important routes have been preserved; furthermore, there will be tourist traffic on 40 km of railways - e.g. Sometimes with steam trains - offered.

Donauwörth is the only train station in the district that is connected to the ICE and IC networks. Since the opening of the high-speed line Nuremberg – Ingolstadt – Munich , however, there have been significantly fewer high-speed trains .

Distribution of seats in the district council of the Donau-Ries district ( local election 2020 ):

Distribution of seats in the district council of the Donau-Ries district ( municipal election 2014 ):

Since the end of October 2017, the Donau-Ries district is the only one in Bavaria that has been completely free of loans, securities debts or obligations from legal transactions similar to credit. The district levy has been gradually reduced since then.

There are six nature reserves , 22 landscape protection areas , 17 FFH areas and at least 43 geotopes designated by the Bavarian State Office for the Environment (as of August 2016) in the district.

On August 5, 1974, the district was assigned the DON , which has been valid since July 1, 1956 for the Donauwörth district. It is still issued today.

Until the 2000s, vehicles from the old district of Nördlingen received license plates with the letter pairs NA to ZZ and the numbers from 1 to 99, later also 100 to 999.

Since July 10, 2013 , the distinctive sign of Lower Austria (Nördlingen) has also been available.