The district of Starnberg is located in the southwest of the Bavarian administrative district of Upper Bavaria . 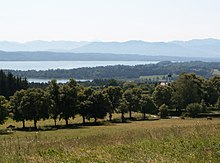 Andechs Monastery in front of the Karwendel Mountains

The Starnberg district is part of the “ Fünfseenland ” cultural landscape , as it includes the northwestern stretch of Lake Starnberg , the Weßlinger See , the Wörthsee , the Pilsensee and parts of the eastern Ammersee .

Between the Starnberger See (584 m) and the Ammersee (533 m), the hilly landscape of the Wurm-Ice Age side and terminal moraines extend , which have their highest elevation in the district area in the Berndorfer Buchet (750 m) near Obertraubing (west of Tutzing).

The Ilkahöhe (726 m) near Tutzing is a well-known vantage point with a view of Lake Starnberg and the Alps . The Würm leaves Lake Starnberg on its north bank . She has dug a narrow river bed and is leaving the district near Krailling in the direction of Munich .

The district borders in a clockwise direction to the north, starting with the districts of Fürstenfeldbruck , Munich , Bad Tölz-Wolfratshausen , Weilheim-Schongau and Landsberg am Lech .

There are ten nature reserves , six landscape protection areas , eleven FFH areas and at least twelve geotopes designated by the Bavarian State Office for the Environment (as of April 2016) in the district.

On January 1, 1939, the uniform imperial designation Landkreis was introduced. So the district office of Starnberg became.

As part of the regional reform in Bavaria , the Starnberg district was expanded to include the communities of Bachhausen and Höhenrain as well as the community-free area of ​​Wadlhauser Gräben of the dissolved Wolfratshausen district on July 1, 1972 .

The district is popular as a local recreation area and has seen strong immigration from the Munich area.

The population figures from 1840 onwards refer to the territorial status on May 25, 1987.

See monuments in the Starnberg district

The district's purchasing power index is 144.0 percent of the national average (100 percent) or 33,102 euros per inhabitant (as of 2018). Thus the district of Starnberg has the highest per capita income of all districts in the Federal Republic of Germany.

13.5 percent of employees in the Starnberg district have a university or technical college degree - twice as many as the national average.

In the Future Atlas 2016 , the district of Starnberg was ranked 8th out of 402 districts, municipal associations and independent cities in Germany, making it one of the regions with "top future opportunities". In the 2019 edition, it was again ranked 8th out of 401.

The society for economic and tourism development in the district of Starnberg mbH (gwt Starnberg GmbH) markets the region in the spelling "StarnbergAmmersee" and was "founded as an interface between companies, administration, politics and citizens". In addition to marketing aspects in general as a business location, the gwt also acts as a tourism association whose website, among other things, advertises holiday destinations within the region and allows accommodation to be booked. The shareholders of the gwt are the district, the municipalities of the district and four neighboring communities on the lakes of three other districts ( Bernried am Starnberger See , Dießen am Ammersee , Münsing , Seeshaupt ), as well as the Federation of Self-Employers - Gewerbeverband Bayern eV and the employers' association for economic development (UWS ).

The Starnberg district is served by two S-Bahn lines of the Munich Transport and Tariff Association and three federal highways.

achieved on the 1854 from Pasing-Starnberg railway built route from Munich forth across Gauting in Starnberg the western shore of the lake; then it continues on the section to Tutzing , which, like the extensions to Weilheim and Penzberg, was added by the Weilheim city railway in 1865/66 .

uses the railway line that was put into operation in 1903 by the Bavarian State Railway from Pasing to Herrsching.

The Autobahn 96 Munich – Lindau opens up the western district.

The Autobahn 95 Munich – Garmisch-Partenkirchen runs around 13 km near the eastern border of the district.

The almost 5 km long motorway 952 , which branches off the A95 at the Starnberg motorway triangle, ends near the northern tip of Lake Starnberg on the eastern outskirts of Starnberg.

→ Main article : List of district roads in the Starnberg district

→ Main article : List of the district administrators of the Starnberg district

A white and blue flag with the county coat of arms is used as the unofficial county flag .

See also : List of municipalities in the Starnberg district

Municipalities of the district before the territorial reform 1971/78

Up until the regional reform in 1971/78, the Starnberg district had 40 communities (see list below).

The municipalities of the Starnberg district before the municipality reform in 1971/78. (The churches that still exist today are in bold .)

1 : had only been an independent municipality since 1952

On July 1, 1956, the district was assigned the distinctive sign STA when the vehicle registration number that is still valid today was introduced . It is still issued today. The distinctive symbol WOR (Wolfratshausen) has also been available since July 10, 2013 .