Oberpfaffenhofen is a district of the Upper Bavarian community Weßling in the Starnberg district .

The formerly independent municipality of Oberpfaffenhofen became a district of Weßling in 1976 as part of the municipal area reform through incorporation . The last acting mayor (honorary) from 1960 to 1975 was the farmer Alfons Schönwetter (* 1912; † 1995).

A 380 approaching the special airport Oberpfaffenhofen 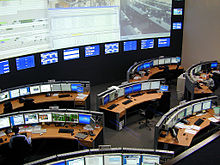 A number of industrial parks and research facilities are grouped around the airfield, including the German Aerospace Center . V. (DLR) with the space control center , which uses the connection to the special airport with a research flight operation. Several research aircraft , from a single-engine Cessna 208 to the twin-engine Do 228 turboprops to a twin -engine jet ( Falcon 20E ) fly from here mainly on behalf of remote sensing and climate research worldwide. Clients or participants usually come from the research institutes at the Oberpfaffenhofen location (e.g. Institute for Atmospheric Physics ) and many German or European universities and research institutions.

The predecessor of this research facility was the Aeronautical Research Institute Oberpfaffenhofen (FFO), which was founded in 1937 by Max Dieckmann .

One of the two main control centers of the ESA's Galileo satellite navigation system is located on the premises of the DLR.

In addition, the company RUAG is based there as the successor company to the military and civil service area of ​​the former Dornier Luftfahrt GmbH.

Districts of the community of Weßling