Independent cities and districts before the regional reform, 1970

The regional reform in the Free State of Bavaria was carried out in the years 1971 to 1980 and had the goal of creating more efficient communities and districts . This should be achieved through larger administrative units ( community mergers ), which, in the opinion of the Bavarian state government , would work more efficiently.

The number of municipalities was reduced from 7004 to 2050. In particular, this should prevent small communities with fewer than 2000 inhabitants (around 80%) from having to reduce their services. 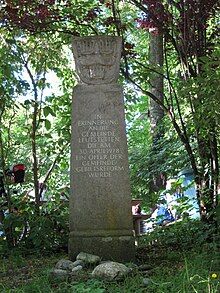 Memorial stone for the community of Leutstetten , today part of Starnberg , which was a "victim" of the regional reform.

In 1967, at the beginning of the 6th electoral term of the Bavarian State Parliament , both the ruling CSU and the opposition SPD sought to reform the local government. The ideas of the SPD went considerably further than the plans of the CSU. The SPD wanted the government districts and rural districts to be dissolved , and administrative regions to be created in their place. The municipalities should be amalgamated in administrative communities with sizes of 5,000 and 10,000 inhabitants. As a result, opponents of the changes later had little support from the parliamentary opposition.

The ruling party, on the other hand, wanted to retain the previous basic structure of district - district - municipalities, but significantly reduce the number of rural districts and municipalities and thus increase the population of these local authorities .

Prime Minister Alfons Goppel announced the reform in his government declaration of January 25, 1967, calling it the most important domestic political task of this legislative period. The regional reform was initiated by Bruno Merk (CSU), who was Minister of State for the Interior from 1966 to 1977 . His successor in office, Alfred Seidl , completed the regional reform. Merk set up a working group on local government reform in 1968 . On April 16, 1970, the government presented a draft law to strengthen local self-government .

The territorial reform was divided into two parts:

As part of the reorganization of Bavaria into districts and independent cities, which was decided on December 15, 1971 and came into force on July 1, 1972, a total of 71 new districts were made from 143 districts . 23 of the former 48 urban districts lost their district freedom. To compensate for this, they were given limited additional rights vis-à-vis the other municipalities belonging to the district and were allowed to bear the title of “ large district town ”.

The municipal area reform from 1972 to 1978 reduced the number of Bavarian municipalities from 6,962 in 1970 by over two thirds to 2,051 municipalities belonging to the district. It came into force on May 1, 1978 after several resolutions and ordinances. More than 900 of the communities were also member communities in administrative communities . The reform was completed by the law on the conclusion of the municipal territorial reform of January 1, 1980, in which minor corrections were made.

The municipal territorial reform in particular led to violent political disputes on the ground. Since the beginning of the regional reform, around 300 municipalities have left an administrative community and are managing themselves again, for example Igensdorf in the Forchheim district .

In some cases the resistance of the citizens led incorporated towns back to independence. Examples are Horgau near Augsburg, Irlbach near Straubing, Albaching in the Rosenheim district , Bechtsrieth in the Neustadt an der Waldnaab district , Baar in the Aichach-Friedberg district , Rettenbach am Auerberg in the Ostallgäu district and Ermershausen in the Haßberge district .
While these communities gained their independence by political means, the community reached Edling their independence due to a popular action to Bavarian Constitutional Court . On April 29, 1981, the latter declared the incorporation into the area of ​​the city ​​of Wasserburg am Inn null and void.

The small Lower Franconian village of Ermershausen gained national fame in 1978 because the inhabitants vehemently opposed integration into the Maroldsweisach community by barricading the town hall. The village was stormed by hundreds of riot police ; the town hall had to be evacuated. Since 1994, Ermershausen has been an independent municipality again.