The Bavarian Prime Minister , according to the fourth section of the first main part of the Constitution of Bavaria , the chairman of the Bavarian state government .

Markus Söder ( CSU ) has been Prime Minister of the Free State of Bavaria since March 16, 2018 . He is the successor to Horst Seehofer ( CSU ), who has moved to the Merkel IV cabinet as Federal Minister of the Interior, for Building and Home Affairs .

The Minister-President is secretly appointed by the Bavarian State Parliament , which meets at the latest 22 days after its election (this period has been in effect since the referendum of September 21, 2003) within a week of its constituent meeting for a period of five years with an absolute majority of the votes cast Vote elected. If none of the applicants achieves this majority in the 1st ballot, there will be a runoff between the two applicants who received the most votes. In the event that the runoff ballot in two rounds leads to a ballot between these two applicants, Section 45 (2) sentence 2 of the Rules of Procedure of the Bavarian State Parliament provides for a drawing of lots. Every Bavarian who is eligible to vote is eligible as long as he has reached the age of 40. The state parliament cannot remove the prime minister from office. The constitution stipulates his resignation, however, if a trusting cooperation with the state parliament is no longer possible due to political circumstances (Art. 44 Para. 3 Bavarian Constitution ). If he doesn't, he can be charged before the Bavarian Constitutional Court .

The prime minister directs the affairs of the state government. With the consent of the Landtag, he appoints and dismisses his deputy and a maximum of 17  ministers of state and state secretaries to whom he assigns business areas or special tasks. According to Article 50 of the state constitution, the Prime Minister can take over one or more business areas himself. He is responsible for the political guidelines and represents Bavaria externally. In his actions he is responsible to the state parliament. The Prime Minister can make use of a right to pardon .

The Bavarian State Chancellery supports the Prime Minister in his constitutional tasks .

The forerunner of the office of the Prime Minister was the Secret Council Chancellor of the Electorate of Bavaria . From the end of the 18th century, the Minister of Foreign Affairs , from 1806 Minister of the Royal House and Foreign Affairs , usually assumed a prominent position. In 1847 a Council of Ministers was established, but King Ludwig I (1825–1848) reserved the chair for himself; in his absence the most senior minister presided over the meetings. In 1849 the office of chairman of the Council of Ministers was created, which with one exception (1880-1890) was connected to the office of Foreign Minister until the end of the kingdom . With the establishment of the Free State on November 8, 1918 in the course of the November Revolution at the end of the First World War , the office of Prime Minister was also created; the first incumbent on a revolutionary basis was Kurt Eisner . During the Nazi regime the office between 1933 and 1945 lost due to the DC circuit of the countries in importance.

The American military government appointed Fritz Schäffer as "Temporary Minister-President for Bavaria" on May 28, 1945 ; on September 28, 1945 she deposed him and appointed Wilhelm Hoegner (SPD) as his successor. After the state elections on December 1, 1946 , the state parliament elected Hans Ehard (CSU) as Prime Minister (the first freely elected after the war). Ehard held two full legislative terms ( Cabinet Ehard I , II and III ). 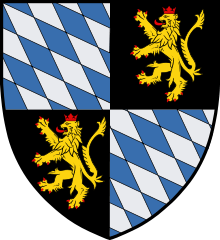 Coat of arms of spa Bavaria

Before 1849 there was no prime minister, but the Minister of Foreign Affairs, from 1806 Minister of the Royal House and Foreign Affairs , usually had a priority. In 1847 a Council of Ministers was established, but King Ludwig I (1825–1848) reserved the chair for himself; in his absence the most senior minister presided over the meetings.

Chair of the Council of Ministers

In 1849 the office of chairman of the Council of Ministers was created, which with one exception (1880–1890) was connected to the office of Foreign Minister.

Prime ministers and exceptional bodies of the Free State of Bavaria

Although the Prime Minister is not a civil servant , his remuneration is linked to the civil servant's pay. According to Article 10 of the Bavarian Ministerial Law, he receives 32/25 of the basic salary of grade B 11; this is currently (as of 2020) 18,155.32 euros per month. In addition, there are family allowances, allowances and allowances in the corresponding application of civil service law, as well as a service expense allowance of 1150 euros per month.

State governments appointed by the US military government 1945/1946
Schäffer  | Hoegner I.