The Bavarian nationality is unchanged since 1946 existing Article 6 of the Constitution of Bavaria formalized (BayVerf), but the absence of an implementing law no actual significance. Bavarian citizenship ( indigenous ) has existed as a constitutional law since the constitution of the Kingdom of Bavaria on May 1, 1808 and was regulated uniformly for all of Bavaria with an edict of January 6, 1812.

Article 6 BayVerf specifies the circumstances of acquisition of Bavarian citizenship, Article 7 regulates who is to be considered a Bavarian citizen, and Article 8 regulates the relationship between the Bavarian people and the nationals of other German states . The provisions are in detail:

Article 8
All German citizens who are resident in Bavaria have the same rights and the same obligations as Bavarian citizens.

The “draft of a law on Bavarian citizenship” was intended to implement Art. 6 Para. 3 BayVerf. Justice Minister Wilhelm Hoegner forwarded the draft to the President of the Bavarian State Constitutional Assembly , Michael Horlacher , on September 14, 1946 . The draft law passed through the committee and was adopted by the state assembly on October 15, recommending the enactment of this law to the state government . When the law came into force, the refugees in Bavaria would not have acquired Bavarian citizenship, as the reference date was January 1, 1934. In a letter dated October 24, Lucius D. Clay refused to approve the law insofar as a Bavarian nationality is not also a German one. The law was then postponed and not promulgated. On April 3, 1952, the Bavarian State Parliament decided almost unanimously to "propose a draft law regulating Bavarian citizenship [...] in the near future". The state government declared that one had to wait until the “Citizenship Clearing Act” was passed in Bonn in order to comply with the state parliament decision. In 1958 the application for the issuance of an identity card stating the possession of Bavarian citizenship was rejected by the Bavarian Administrative Court and the subsequent constitutional complaint in 1959.

In the summer of 1962, MP Max Ludwig Lallinger ( BP ) asked whether a Bavarian nationality law had already been drawn up after the request made in 1952. The then interior state secretary Heinrich Junker replied that a design was made in 1956. "Since then, the draft has not been pursued by the Ministry of the Interior because Bavarian citizenship has no legal and therefore no practical significance." Lallinger replied that Art. 44 BayVerf required a legally binding determination of his status as a Bavarian in order to elect a Bavarian Prime Minister .

The Constitutional Court instructed the applicant deputies Lallinger 1965, individual citizens have no right to that in the Constitution provided the law is enacted, thus lacked the subjective right.

Relationship of Art. 6 BayVerf to the Nationality Act of the Federation 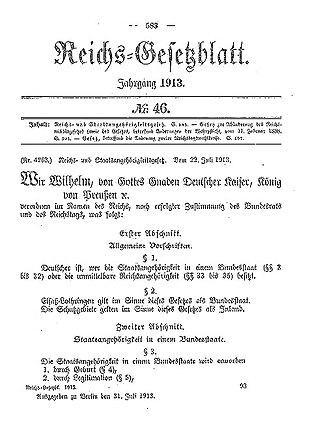 Front page of the Reich and Citizenship Act of 1913

The question of nationality is not, by its very nature, a matter of regulation that belongs exclusively to the federal government. Rather, German citizenship law has always been characterized by the coexistence of citizenship within the confederation and citizenship in one country. Section 1 of the Citizenship Act of 1870 stipulated: "Reich citizenship is acquired through citizenship in a federal state and expires when it is lost." Article 1 of the Reich and Citizenship Act in its original version of July 22, 1913 (RGBl. P. 93) read: "A German is someone who is a citizen of a federal state (Sections 3 to 32) or who has direct nationality (Sections 33 to 35)".

Ordinance on German citizenship of February 5, 1934

During the time of National Socialism , the coexistence of federal and state citizenship was abandoned, as § 1 of the ordinance of February 5, 1934 (RGBl. I p. 85) ordered that citizenship in the states cease to exist (paragraph 1) and it will continue to do so in the future There would only be German citizenship (Reich citizenship) (para. 2).

Rather, Art. 74 (1) no. 8 GG was repealed with effect from December 31, 1994. However, this should not change anything in the basic coexistence of two nationalities. As evidenced by the official justification for the amendment to the Basic Law, the decision on establishing a state citizenship should now be left exclusively to the states. The federal government has only waived its legislative right and transferred the matter to the exclusive legislative competence of the states ( Article 70, Paragraph 1 of the Basic Law), but did not want to exclude state citizenship laws in future.

Practical use of Bavarian citizenship today

Bavarian citizenship is currently - unlike when the Bavarian Constitution came into force on December 8, 1946, when there was still no German nationwide state - suspended, i.e. H. thus de facto currently without relevance for the citizens of the Free State of Bavaria, which has been a partially sovereign member state of the Federal Republic of Germany under international law since 1949 . Their citizenship is also decisive for Bavaria.

In another case, in which the complainant claimed German and Bavarian citizenship, the Bavarian Constitutional Court decided that there was no need to go into this in more detail. Because the complainant could in no way invoke that constitutional norm because no subjective rights could be derived from it, at least as long as the nationality law provided for in Art. 6 (3) BayVerf had not yet been passed . This decision makes it clear that for the time being the individual has no way of benefiting from the formal continued existence of Bavarian citizenship.

In 2013, the Constitutional Court ruled that the acquisition (or loss) of Bavarian citizenship "was not enforceable, since the law provided for in Art. 6 Para. 3 BayVerf was not enacted. The reason for this is that the provisions of the Bavarian Constitution of 1946 on Bavarian citizenship have lost their significance with the inclusion of Bavaria in the Federal Republic of Germany (...). "Further:" Citizens within the meaning of Art. 7 Para. 2, Art 12 para. 3 sentence 1 BayVerf is everyone who has German citizenship according to Art. 16, 116 GG and lives in Bavaria. According to this case law, foreigners can not be citizens (...). "

Development of state citizenship in the other federal states

Incidentally, none of the other federal states has included regulations on state citizenship in its constitution, although many state constitutions are still pre-constitutional (enacted before the Basic Law came into force). No state citizenship laws have been passed either. In the official justification for the abolition of Article 74, Paragraph 1, No. 8 of the Basic Law, it was pointed out that the abrogated provision had no practical significance and that no negative effects for the federal government due to the abolition of the regulation were to be feared, since the states in could not regulate nationality in the federal government.