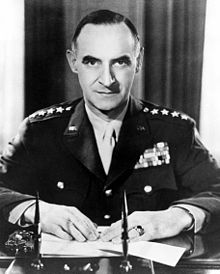 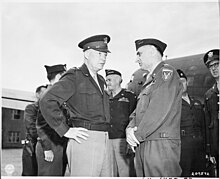 Clay was the son of the senator of the state of Georgia , Alexander Stephens Clay was born, and came after the conclusion of the Military Academy in West Point , in 1918, the army engineer corps one. As Deputy Chief of Staff to General Dwight D. Eisenhowers , Clay repaired the port of Cherbourg in World War II after the 1944 invasion and was then appointed Deputy Head of War Planning and Mobilization .

In early May 1945, shortly before the German surrender, Clay became General Eisenhower's deputy, and after the German surrender he became Deputy Military Governor and Deputy Commander in Chief of the US zone of occupation and the American sector of Berlin. As Eisenhower's successor, Joseph T. McNarney was his superior from October and November 1945. Clay was one of those who, as early as 1945 , advised against a strict occupation policy in accordance with JCS 1067 , which was still influenced by the Morgenthau Plan and focused on punishing and restricting industry. Instead, he initiated a more generous policy, exhausting his creative leeway and, through several submissions and studies commissioned by him, for example A Report on Germany , favored the development of the JCS 1779 directive , whose cooperative, liberal and market-oriented policy he implemented out of conviction.
On March 15, 1947, Clay became McNarney's successor himself as military governor of the American zone of occupation and commander of the US land forces in Europe. In this function, too, he promoted an export-oriented industrial policy and the formation of the bizone , accelerated the democratization in his area of ​​responsibility and was the initiator and responsible for the establishment of the Berlin Airlift in 1948/49.
During the airlift, Clay had already asked for his transfer several times in disputes with his superior departments, three days after the end of the Berlin blockade , on May 15, 1949, he actually submitted his resignation as military governor and resigned from the active on June 1, 1949 Service off. On his return to the USA, he was honored in New York with a confetti parade . The following year he was commissioned to accompany the Berlin Freedom Bell in a kind of triumphal procession through the USA and West Germany, and on October 21, 1950, he handed it over to the Berliners. The correct inscription reads: “I believe in the inviolability and dignity of every single person. I believe that all people have been given equal rights to freedom by God. I promise to resist any attack on freedom and tyranny, wherever it may occur. ”Quote on the ringing of the freedom bell every Friday at RIAS Berlin.

He then worked as CEO of various companies in the economy until 1961 President John F. Kennedy reactivated him as a personal representative in Berlin.

Memorial plaque for Lucius D. Clay at the house at Im Dol 46–48, in Berlin-Dahlem

The former Kronprinzenallee in Berlin has been called Clayallee since June 1, 1949 . Clay received an honorary doctorate from the Free University of Berlin in 1953 . In 1958 he was elected to the American Academy of Arts and Sciences . In 1962, Lucius D. Clay was made an honorary citizen of Berlin . In 1965 Clay was awarded the Grand Cross of the Federal Cross of Merit. In 1974, a comprehensive school with upper secondary school was opened in the Berlin district of Rudow , which was named "Clay School". On October 17, 1978, the " Lucius-D.-Clay-Kaserne " in the Garlstedter Heide in Lower Saxony's district of Osterholz was opened for the US Army. It has been a Bundeswehr location since October 1, 1993 and continues to be called Clays.

Clay also received the Konrad Adenauer Prize from the Germany Foundation . He donated the 32,000 DM prize money to the Association of German-American Clubs . With these funds he created the "Lucius D. Clay Medal", which has been awarded annually since 1980 as part of the celebrations for German-American Day to people who have made outstanding contributions to German-American relations.

On April 23, 2006, Clays' former residence in Berlin-Dahlem u. a. by US Ambassador William R. Timken Jr. unveiled a plaque. Clay's son, Frank B. Clay, was the guest of honor at the ceremony.

In Wiesbaden , the Army Airfield , the starting point for airlift flights, was also named after Clay.