Stained glass window in the old town hall in Münsingen 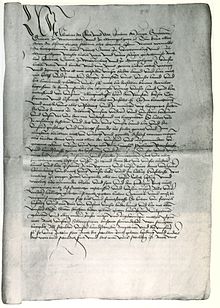 The Münsinger Treaty of December 14, 1482 reunited the two parts into which the County of Württemberg had been divided since the Nürtingen Treaty of 1442. The inheritance disputes between the Urach and the Stuttgart part were settled after 40 years. Count Eberhard V. im Bart, who later became Duke Eberhard I , resided in Urach , took over the government of the country and moved the residence to Stuttgart , the capital of the other part of the country. The succession was on the incumbent count in the Stuttgart part of the country Eberhard VI. set. With the contract, with the participation of representatives ofWuerttemberg estates , the so-called honorability , was negotiated in Münsingen , the indivisibility of the state and the primogeniture (birthright) in Württemberg were legally established. The Münsingen Treaty prevented the fragmentation of Württemberg and thus created an important prerequisite for the elevation of Württemberg to a duchy in 1495.

The original document of the contract is kept in the main state archive in Stuttgart .