The Stiftung Deutsches Historisches Museum (DHM) is a foundation and a museum for German history in Berlin and sees itself as a place of “education and understanding about the common history of Germans and Europeans”. It is one of the most frequently visited museums in Berlin.

The museum is located in the Armory on Unter den Linden in Berlin and in the adjacent exhibition building by IM Pei .

The museum has the legal form of a foundation under public law supported by the Federal Republic of Germany . The highest body is the representatives of the Federal Government , the German Bundestag and the provincial governments occupied Trustees .

History of the museum 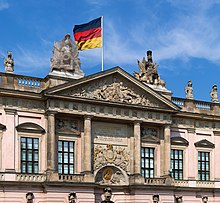 The museum was founded on the occasion of the 750th anniversary of the city of Berlin on October 28, 1987 in the Reichstag building in what was then West Berlin . After the great success of the Prussian exhibition " Prussia - Attempting a Balance Sheet ", which was shown in the Martin-Gropius-Bau in 1981 , the then governing mayor of West Berlin, Richard von Weizsäcker , commissioned four prominent historians - Hartmut Boockmann , Eberhard Jäckel , Hagen Schulze and Michael Stürmer - with the drafting of a memorandum that was available in January 1982 under the title German Historical Museum in Berlin . The project was strongly supported by Federal Chancellor Helmut Kohl , who considered the establishment of a German Historical Museum (DHM) in Berlin in his State of the Union speech, which he gave to the German Bundestag on February 27, 1985, as a national task of European importance designated. An expert commission, consisting of 16 leading historians, art historians and museum directors, developed the concept for the museum in 1985/1986 and put it up for discussion in public hearings in 1986. The final version became the basis for the museum's founding. Presenting German history in an international context became the core of the museum's task. Multi-perspective perspectives should enable understanding of the perspective of others in order to reflect on a higher level in the time of the internationalization of everyday life and the globalization of economy and work, history and culture. On September 1, 1986, the Berlin Senate announced that the planned German Historical Museum would be located next to the congress hall . On July 28, 1987, the partnership agreement was signed between the Federal Republic of Germany and the State of Berlin to establish the German Historical Museum Society as a provisional sponsor with limited liability.

Originally, the Spreebogen near the Reichstag was supposed to be the location of the museum. In 1988 the Italian architect Aldo Rossi won the architecture competition announced for this purpose . In 1989, however, the fall of the Berlin Wall changed plans: on the day of German reunification on October 3, 1990, the Federal Government transferred the collection and property of the then Museum of German History to the DHM , which the last GDR government had given the director of the DHM had been subordinated. The Zeughaus from 1695 - the oldest building on Unter den Linden - became the seat of the German Historical Museum. In September 1991 the first exhibitions were shown in the armory.

Shortly after it was founded, the collection began to be built up. Since December 1994, the permanent exhibition Pictures and Testimonies of German History with more than 2000 exhibits presented a first cross-section .

Between 1994 and 1998 the facade of the armory was renovated according to historical principles. The armory was closed in 1998 and renovated by the Winfried Brenne architecture firm by 2003. The Zeughaushof, the inner courtyard with the masks by Andreas Schlueter , was given a glass roof again in the course of the new exhibition hall built by the architect Ieoh Ming Pei between 1998 and 2003 . Since 2003 the new building has been open as an exhibition hall for special exhibitions with an area of ​​2700 square meters on four floors. The permanent exhibition of German history in pictures and testimonies in the armory was opened on June 2, 2006 by Chancellor Angela Merkel .

Since December 30, 2008, the DHM has had the legal form of a federal foundation under public law . It is also the sponsor of the Escape, Expulsion, Reconciliation Foundation established in 2009 to set up a memorial and documentation center on flight and expulsion.

General Directors of the Museum or Presidents of the Foundation:

The permanent exhibition “German History in Pictures and Testimonies” can be seen on 8000 square meters in the Zeughaus. More than 7000 historical exhibits convey eventful and exciting German history from the Middle Ages to the end of the 20th century in an international context.

The four floors of I. M. Pei's exhibition hall are mainly used for the museum's special exhibitions. 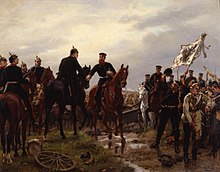 The Zeughauskino with its 165 seats is an integral part of the German Historical Museum and is located in the Zeughaus. Its primary goals combine historical and film-historical issues into a program that, in addition to the series accompanying the exhibition, is primarily characterized by thematic retrospectives.

The special scientific library on German and general history as well as on museums has around 250,000 volumes, including 13,000 rare books , 40,000 volumes of magazines and newspapers, 5,000 volumes of militaria and 15,000 museum catalogs. The public reference library is located in the administration building of the museum behind the armory, which from 1899 to 1945 belonged to the Prussian Central-Genossenschaftskasse and later to the GDR state enterprise Minol .

The museum provides the most comprehensive object database of all museums in Germany for online research. The database is updated weekly. All of the museum's collections are documented in it. The database currently contains information on over 600,000 objects and provides a digital photo for around 70 percent of these objects.

Reproduction rights for commercial and non-commercial uses are administered by the DHM image archive, which calculates usage fees customary in the industry.

The German Historical Museum Foundation is a cooperation partner of the online portal Lebendiges Museum Online .