The Governing Mayor of Berlin is the head of government of the country Berlin and also mayor of Berlin. He chairs the Berlin Senate , determines the guidelines for government policy , monitors compliance with them and represents Berlin. The governing mayor is elected by the Berlin House of Representatives.

The governing mayor of Berlin appoints the other members of the government (senators) and designates two of them as mayors, his deputies.

He is supported in his work by the Senate Chancellery .

The twelve districts into which Berlin is divided each have a district mayor . However, these are not traditional mayors, as the districts are not their own municipalities due to Berlin's position as a unified municipality.

The governing mayor of Berlin has been Franziska Giffey since December 21, 2021 . It has ruled since the 2021 election with a red-green-red state government ( Senate Giffey ).

In Berlin, government is exercised by the Senate . It consists of the governing mayor and up to ten other senate members (Art. 55 of the Berlin Constitution , VvB). Of these senators in the function of ministers , two each are appointed as mayors by the governing mayor as his deputy (Art. 56 para. 2 sentence 2 VvB).

The governing mayor has a double function because Berlin is a city-state : On the one hand, with regard to the role of Berlin as the state of the Federal Republic of Germany, it is on an equal footing with a prime minister ; on the other hand, he has the function of a normal mayor , because Berlin is also a political municipality.

The governing mayor is elected by a majority of the members of the Berlin House of Representatives in accordance with Art. 56 Para. 1 VvB . If no candidate achieves this majority, a second ballot is scheduled. If this majority is not achieved there either, a simple majority of the votes is sufficient in a third ballot. Not every governing mayor was previously the top candidate of his party in an election for the Berlin House of Representatives .

The Governing Mayor appoints and dismisses the Senators of Berlin in accordance with Art. 56 Para. 2 Clause 1 VvB . Until the last constitutional amendment came into force on July 6, 2006, the individual senators were also elected by the House of Representatives.

In contrast to the Federal Chancellor , for example, the governing mayor does not have full authority to issue guidelines : he determines the guidelines of government policy in accordance with Art. 58 (2) VvB with the approval of the House of Representatives.

In the absence of any other regulation, a minimum age of the governing mayor of 18 years is stipulated within the framework of the passive right to vote . The governing mayor does not have to be a member of the House of Representatives. 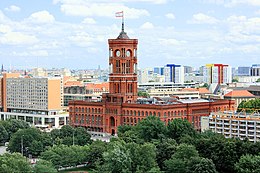 The Red City Hall in Berlin 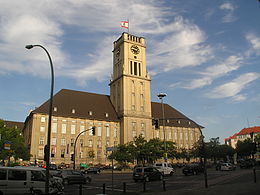 During the division, the Schöneberg Town Hall was the official seat of the Governing Mayor.

The official seat of the Governing Mayor and the Senate is the Red Town Hall (Berlin Town Hall).

The division of Berlin made a residence for the head of the western part of the city necessary. For this purpose, from 1949 to 1991, the Schöneberg Town Hall was the official seat of the Governing Mayor of Berlin (until 1990 West Berlin ).

The governing mayor receives official salaries. These are made up of the basic salary and allowances and supplements. According to § 11 Senators Act (SenG), the basic salary corresponds to 1.2 times the basic salary of salary group B  11. According to the 2014 salary table, that was 165,407.76 euros per year. After adjustments made in the meantime, the basic annual salary since April 1, 2019 has been 193,418.35 euros. The governing mayor has to pay tax on his income, but - like civil servants - he does not have to pay any unemployment insurance or pension contributions. Like his colleagues in the Senate, he receives a taxable pension after the term of office.

In addition to many honors by naming streets, squares, sculptures or facilities, former office holders are also namesake of the following awards: