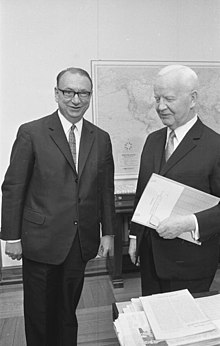 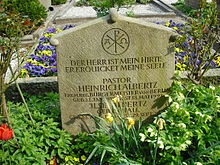 Heinrich Albertz was the son of the court preacher and consistorial councilor Hugo Albertz and his second wife Elisabeth, b. Meinhof. After studying theology, Albertz became a member of the Confessing Church .

In the summer of 1945 Albertz came to Celle as head of church and state refugee welfare offices . On January 10, 1946, he was appointed by the British military government to the first Celle city council after the war. In 1946 he joined the SPD. He worked as a “refugee pastor” and took care of the integration of people who had lost their homeland. In addition to his political commitment, he took over the Federal Presidency of the Workers' Welfare Association (AWO) from 1949 to 1965 .

On June 9, 1948 he was appointed Minister for Refugee Affairs by the Lower Saxony Prime Minister Hinrich Wilhelm Kopf (SPD) (from September 18, 1950 Minister for Expellees, Social and Health Affairs). In the following cabinet head he was Lower Saxony Minister of Social Affairs from 1951 to 1955 .

After leaving the state government of Lower Saxony, he was appointed Senate Director in West Berlin by Berlin's Governing Mayor Otto Suhr . In 1959 he was appointed head of the Senate Chancellery by Suhr's successor Willy Brandt . In 1961 he took over the office of Senator for the Interior and in 1963 was also mayor.

After Willy Brandt entered the Kiesinger cabinet as Federal Foreign Minister on December 1, 1966 , Albertz was elected as the new governing mayor by the Berlin House of Representatives on December 14, 1966 .

Although he had been a member of the SPD party executive since 1950, Albertz, unlike his predecessor Brandt, did not have unreserved support in his party. In the elections to the Berlin House of Representatives on March 12, 1967 , with a result of 56.9% of the vote, despite a loss of 5 percentage points, he succeeded in continuing his party's governing coalition with the FDP.

Because of the Shah's visit to West Berlin on June 2, 1967, protest demonstrations and clashes between opponents of the Shah on the one hand and the police and " cheering Persians " on the other had already broken out in front of the Schöneberg Town Hall . At quarter past eight in the evening the Shah couple, Federal President Heinrich Lübke and Albertz came to a performance in the Deutsche Oper, before which they were expected by a large crowd of demonstrators; the security guards struggled to avoid the flying eggs and tomatoes. Albertz then ordered his close confidante, the Berlin police chief Erich Duensing : "When I come out, everything will be clean!"

During the opera performance, the opera forecourt was cleared at around 8 p.m., and at 8:30 p.m. the student Benno Ohnesorg was shot dead by the police officer Karl-Heinz Kurras while pursuing the fleeing demonstrators . On the night of June 3, Albertz had it explained:

“The city's patience is running out. A few dozen demonstrators, including students, have earned the sad merit of not only verbally abusing a guest from the Federal Republic of Germany in the German capital, but also one dead and numerous injured - police officers and demonstrators. The police, provoked by rowdies, were forced to crack down on them and use their batons. I expressly and emphatically say that I approve of the behavior of the police and that I have convinced myself through my own eyes that the police have restrained themselves to the limits of reasonableness. "

On June 8th, he spoke to the House of Representatives about an “extremist minority” who “are abusing freedom in order to achieve their ultimate goal of dissolving a basic democratic order”. He made a similar statement on September 3, 1967 in a radio speech about the behavior of the student opposition: “Freedoms of this kind lead to nothing other than fascist counter-pressure and the formation of authoritarian forms of government. We learned that bitterly before 1933. ”However, his attitude gradually changed in the months after June 2nd and after many conversations with Bishop Kurt Scharf he regretted his nightly justification of the“ sharp ”police operation in front of the House of Representatives on September 15, 1967 the words that he was the weakest "when I was the toughest, that night of June 2nd," because he did "objectively the wrong thing" back then. The right-wing party majority in the SPD, which had been striving to overthrow Albertz since he was sworn in, saw his chance in his hapless actions since June 2nd. In alliance with the left wing, she even accused him of “his tough attitude towards the students” and rejected Albertz's proposals to reshuffle the Senate. Isolated from both strong groups of the Berlin SPD, the governing mayor resigned on September 26, 1967. The House of Representatives elected Klaus Schütz as his successor .

In 1970 Albertz also resigned from the Berlin House of Representatives.

From 1970 to 1979 he worked again as a pastor in Berlin-Zehlendorf . He hit the headlines nationwide again in 1975 when he declared himself ready to respond to the kidnappers' demands as part of the Lorenz kidnapping . In the prisoner exchange, which was carried out with the consent of the Federal Government and the Berlin Senate, he was a hostage of the kidnappers. In the 1970s and early 1980s he was one of the speakers for the ARD program Das Wort zum Sonntag .

He was involved in the peace movement in the 1980s. For example, on October 10, 1981 in Bonn he supported the demonstrations against the NATO double decision . On September 1, 1983, Anti-War Day, Albertz blocked the access to the US military depot on the Mutlanger Heide , which was called as a three-day sit -in, together with Oskar Lafontaine , the later Saarland Prime Minister and then Mayor of Saarbrücken , the writer Heinrich Böll and several thousand demonstrators The stationing location of Pershing II medium-range missiles was intended. In 1988 he was awarded the Culture and Peace Prize of the Villa Ichon in Bremen.

Heinrich Albertz died on May 18, 1993 in a nursing home run by the Bremer Heimstiftung in Bremen. He left behind his widow Ilse Albertz, with whom he had been married since 1939, and three children.

Half-brother of Heinrich Albertz was the theologian and resistance fighter Martin Albertz (1883–1956). His son Rainer Albertz (* 1943) is a Protestant theologian (professor of the Old Testament at the Westphalian Wilhelms University in Münster ).

Influenced by the events of the student movement in West Berlin in the 1960s , the artist Wolf Vostell created the picture Heinrich Albertz in 1968 , a blurring of a photograph of Heinrich Albertz as Governing Mayor of Berlin.

The play Albertz by the author Tine Rahel Völcker was premiered on December 6th, 2008 at the Stadttheater Wilhelmshaven .

Heads of the Berlin Senate Chancellery