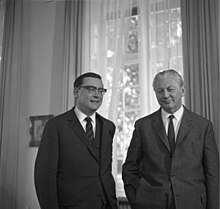 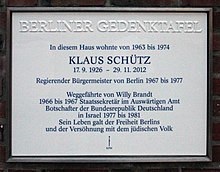 Berlin memorial plaque on the house, Johannisberger Strasse 34, in Berlin-Wilmersdorf

In 1945, shortly before the end of World War II , Klaus Schütz was seriously wounded as an 18-year-old soldier in Italy . His right arm has been paralyzed since then.

His political career in the SPD began after the war on the extreme left wing . He led a Trotskyist youth group in the Berlin district of Zehlendorf , which carried councilist communist positions in the SPD. In 1949 he went to the United States to study . After his return to Berlin he became a supporter of Willy Brandt . He brought the term chancellor candidate with him from the States - derived from Kennedy's presidential candidacy .

Schütz was a member of the German Bundestag from 1957 to 1962 , from 1961 to 1966 Senator for Federal Affairs and at the same time the representative of the State of Berlin at the federal level . Schütz was State Secretary in the Federal Foreign Office from December 12, 1966 to October 27, 1967 . In 1967 he succeeded Heinrich Albertz as Governing Mayor of Berlin, who had resigned as a result of the shooting of student Benno Ohnesorg at the demonstration on June 2, 1967 in West Berlin against the Shah of Persia. Schütz was President of the Federal Council from November 1, 1967 to October 31, 1968 .

The pragmatic social democrat Schütz was hostile to the student movement and the SDS ; in the eyes of the New Left, he embodied the hated “system” in Berlin and was therefore a particular enemy of the movement. During demonstrations, protesting students chanted: "Break the bones of Sagittarius, all power to the councils !"

After the SPD was able to defend the absolute majority (50.4% of the vote) under its top candidacy in 1971 , the CDU became the strongest force for the first time in 1975 (43.9%) ahead of the SPD (42.6%). Together with the FDP (7.1%), however, it was enough for a social-liberal coalition under his leadership. After several financial scandals, Schütz resigned in 1977 and was succeeded by the Senator for Federal Affairs Dietrich Stobbe .

He then went to Israel for four years as the ambassador of the Federal Republic of Germany . From 1981 to 1987 he was the director of Deutsche Welle in Cologne , then director of the State Broadcasting Corporation in North Rhine-Westphalia . In March 1996 Schütz became honorary president of the Berlin German Red Cross and subsequently honorary president. His work was not without controversy, because under his leadership, the Berlin regional association went bankrupt. In the end, Schütz resigned from his post despite previous vehement denials and cleared the way for a fresh start.

Klaus Schütz died on November 29, 2012 after a short serious illness at the age of 86 from pneumonia in the circle of his family.